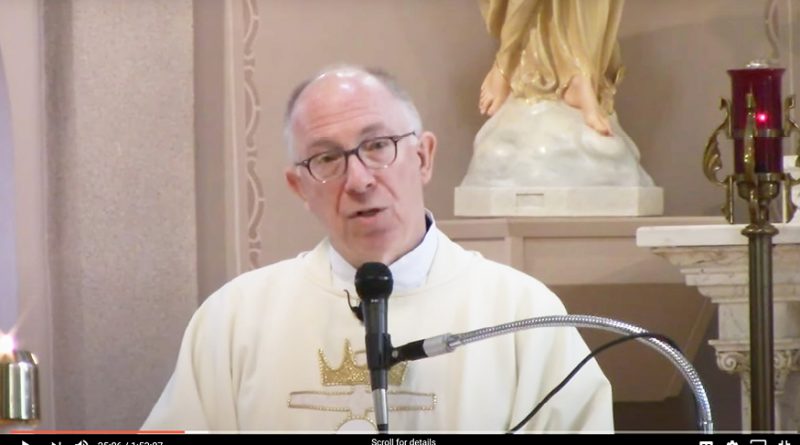 Editor’s Note: What follows is the text of four homilies Archbishop Michael Jackels has given during this year’s Easter season. With public Masses having been canceled in March due to the coronavirus, the archbishop has been celebrating private Masses at the Vianney House Chapel in Dubuque. These liturgies are being steamed live online every Sunday. Videos of these entire Masses, clips of just the homilies, future Masses and other content can be found at dbqarch.org.

They’ve taken the Lord, and we don’t know where they put him – these words from Mary Magdalene have been applied to things other than the body of the Lord Jesus.

For example, they’ve been used in criticism of modern churches, that put the tabernacle some place other than front and center, making it hard to find our Eucharistic Lord.

And when I worked in the Vatican, I applied the words to that place, because there is seldom any reference to Jesus, or any resemblance to his teaching and example.

But lest we sit in judgement of silk-clad clergy, we have to wonder whether the criticism might be made of us too: They’ve taken the Lord, and we don’t know where they put him.

One of the principal themes of the Easter celebration is Baptism, where we receive a share in the life of Jesus; it’s as if we celebrate the resurrection of Jesus in the baptized person.

And at Confirmation, when that gift is strengthened, to show how we serve like Jesus even in school, I tell the youth to share their test answers with a fellow student who has none.

And when they’re sent to the Principal’s office – suffering for the Gospel – and the reason for their visit becomes known, the Principal will surely exclaim: Jesus lives! Jesus is risen!

But so that the life in Christ can be seen and heard in us, first we have to know Jesus, his saving deeds, his teachings, and the way of life that he lays out for his followers – do we?

And there’s no better way to learn that than by reading the Gospel, which maybe should be our focus during this time of no work for some, no school for many, no Mass for any.

It’s said that St. Dominic read the Gospel so often, he didn’t need the text anymore; people who knew him didn’t need it either, for they could “read” the Gospel in Dominic’s life.

No one would say of him – he has taken the Lord, and we don’t know where he put him; please, God, let people find Jesus in us, and when they see and hear us, say: Jesus is risen!

‘Some wonder if Catholics will return to Mass in church …’

The first couple centuries of the Church are known as the age of martyrs, when Christians gave a radical witness: I would die before I would ever deny my faith in Jesus.

The threat of martyrdom eventually ended, but the aspirations of Christians to live radically didn’t; in fact, the birth of religious life is attributed to that holy desire.

We are blessed in the Archdiocese to have many religious communities, men and women, active and contemplative, ministering in education, health care, parishes, and missions.

They are too humble to mention it, but the Church teaches that religious life is the most radical way to follow Jesus, because it removes obstacles that make it hard to imitate Christ.

Living as a community is an essential element of the radical discipleship of religious life, and if you’re wondering how that’s like martyrdom, well, you’ve never tried living it.

Or maybe now, when people are together more, with little to distract us, we know just how radical community living is, calling for service and sacrifice, forgiving and giving.

Community living is an essential element for all Christians, not just men and women religious, as today’s Scripture says: They devoted themselves to the communal life.

This is as essential as it is to learn and teach the Gospel, to worship at Mass and pray, and to share with people in need; in fact, those things should be done as a community.

Christian faith is never just a me and Jesus affair. The Bible says that the baptized are like members of a body, a family, or a community, terms that imply me and Jesus, and thee.

And so, we can only speak of Christian living as being about we, you and ours – like the radical imitation of men and women religious – and not I, me and mine.

Some wonder if Catholics will return to Mass in church with others once the restrictions on gathering is lifted; it’s awfully nice to watch it on TV, in your jammies, with a cup of java.

I suppose it depends if, like the first Christians and religious, we’re devoted to meeting together to learn and teach the Gospel, to worship at Mass and pray, and to serve the poor.

‘Jesus provided for others who couldn’t do for themselves’

I Googled “they came to know him in the breaking of the bread” to see what Catholic websites said – modern day homily prep. The first couple pages were all about the Eucharist.

That isn’t surprising. The breaking of the bread is a classic way of referring to the Liturgy of the Eucharist, the Mass, which is described as the source and summit of our Catholic Faith.

Even so, it didn’t make me think of the Eucharist. And lest you wonder about my faith, I do celebrate Mass, receive Communion, kneel in adoration, and urge others to do likewise.

It’s just that I can’t see how the Emmaus event had anything to do with the Sacrament or the Liturgy of the Eucharist. So, what then? Here’s what I think:

It was the practice in Jewish culture at the time of Jesus that the host, the one who provides the meal, is the one who says the blessing, and literally breaks the bread.

In other words, Jesus provided for others who couldn’t do for themselves, which was so typical of Jesus, that they came to know him in the breaking of bread, that he fed them.

What was typical of Jesus should be also for his followers: to protect and to provide for people who cannot do for themselves, no matter who it is, or if they say please, or thanks.

St. James writes that this practice constitutes pure and undefiled religion. Worship at Sunday Mass is important, but protecting and providing for others is more important.

In fact, Isaiah the prophet teaches that God can’t stand worship, it makes God sick, when it isn’t accompanied by protecting and providing for people who can’t do for themselves.

As I like to say, faith is not a Jesus and me affair, but Jesus and me and thee, which finds its essential expression when Catholics gather in church for Sunday Mass.

But for that expression to be complete it has to inspire us to live to give and to forgive at home, work, school, where we play, anywhere we live out our lives.

I can dispense Catholics from the breaking of the bread at Sunday Mass, but not from the bread-breaking we do in providing for and protecting those who can’t do for themselves.

‘But these are new times, when the finger of God points to a new focus …’

Fourth Sunday of Easter (May 3)

In his powerful Pentecost preaching, Peter said: Save yourself from this corrupt generation! But how? The next line in the passage gives the answer: believe the content of faith, and be baptized.

But after those two steps towards salvation, a way of life must need to follow, characterized by daily prayer and Sunday Eucharist, learning and teaching the Gospel, and works of mercy.

In these sad times, when we are deprived of Sunday Eucharist and faith formation programs, our attention is forced to turn to the other, often neglected, way of practicing our holy Catholic Faith.

Namely, works of mercy, forgiving and giving to others, any other, even an enemy, and even if the other doesn’t say “please” or “thank you” – that’s the focus of our faith practice here and now.

In the late 1800’s, Catholic school education was the focus for the bishops of the USA, because they feared that Catholics would lose their faith if they went to the public schools in use at that time.

But these are new times, when the finger of God points to a new focus, indicated by the Pope God has given us, the name he took, how he imitates St. Francis, and by what COVID-19 has deprived us of.

Joy, kindness, and love for the poor were the means that St. Francis of Assisi used to fulfill the mission God gave him: repair the Church, too focused on money and power, and cold to the poor.

Those are the same means Pope Francis is using for the same purpose, to repair a Church that seems to have forgotten what Jesus taught as the most important thing: love of God thru love of neighbor.

In these times, US Catholics need those same means – joy, kindness, and love of the poor – to repair the Church, wounded by things like clergy sex abuse, and by an “us and them” attitude among us.

So, when the pandemic ends, and it will, and we return to gathering together, will it be to do the same things we did beforehand, and to the same way we did them? I think not; I hope not.

Oh, we’ll still worship, but to repair the Church, the Mass has to aim at spiritually transforming worshippers, to be agents of transformation, on mission to be joyful and kind, and to serve the poor.

Archbishop Michael Jackels gives his homily during a private Mass in Dubuque May 3. The liturgy was streamed live on the internet. The above image is a computer screen shot taken from YouTube. (Witness photo by Dan Russo) 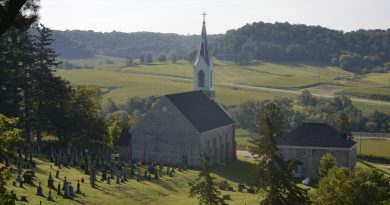 Witness to cease publication after the Oct. 4 issue 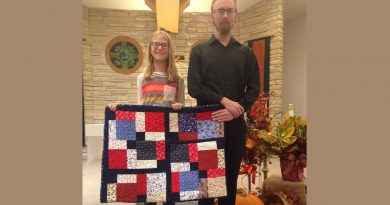 Week 24: Liturgy of the Eucharist: Collection