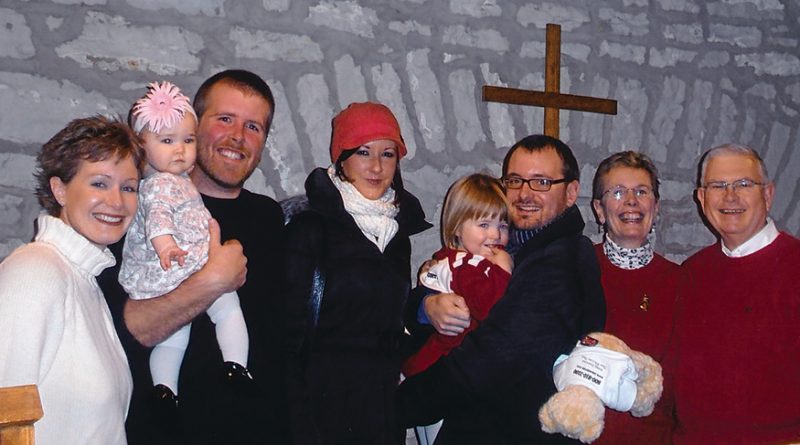 PEOSTA — It’s a routine the 13 O’Neill children remember well — their parents, Dorothy and John, rousing a packed house in Dubuque early each Christmas morning for the drive out to New Melleray Abbey in Peosta for Mass.

There was inevitably some grumbling and groaning among the kids back in the 1950s and ‘60s when the tradition began. Many may have preferred opening presents at home to praying with Trappist monks in an austere chapel surrounded by fields and forests. These days, the O’Neill children are all grown up. Sixty-­seven years after that first trip in 1952, the Christmas visits to the monastery continue, with John and Dorothy’s grandchildren and great-grandchildren now involved. In 2019, you won’t hear any complaints from Pat O’Neill, the eldest, and his siblings. In fact, it’s just the opposite.

“I just think going to the monastery on a quiet, early Christmas morning is as close as you can get to what you envision Christmas was like (the year Jesus was born),” reflected Pat O’Neill.

The tradition of worshiping together every Dec. 25 at New Melleray began when the 75-year-old was only a boy and has continued for 67 years, even after the death of his parents in 2010. Every year, between 30-60 members of the O’Neill clan and their extended relatives gather together in Dubuque and make sure to attend the Mass. Some travel hundreds of miles to do so.

“We’re not a perfect family, but we do pray together and get together,” said Colleen “De De” Lester, the sixth O’Neill child. “It’s part of our life.”

Dorothy Daly met John O’Neill, a native of Wisconsin, in her hometown of Austin, Minnesota, while he was there for work. In 1943, they married. Their first child, Pat, was born while John was serving as a captain in a U.S. Army infantry unit in World War II.

When John came home from Europe, the couple eventually settled in Dubuque. In 1953, the O’Neills started Rainbo Tire, a business which John operated for 30 years.

John and Dorothy O’Neill were passionate about their Catholic faith and dedicated to each other for almost 70 years, ­dying within weeks of each other about nine years ago. As parents, they made sure their children had a vibrant spiritual life, which included regular family rosaries. The couple also taught by example, putting their faith in action through acts of charity and service. Pat O’Neill described his mother having an “open house” where local orphans and foreign refugees were often guests at meals.  John O’Neill attended daily Mass and was one of the founders of the Dubuque Serra Club, an organization that promotes vocations to the priesthood and religious life.

Decades ago, John began forging relationships with the monks of New Melleray, developing a close friendship with Abbot Vincent Daly. It was during Abbot Daly’s tenure as head of New Melleray that the family began attending Christmas Mass there, according to Pat O’Neill. Several years later, the abbot was diagnosed with brain cancer.

“Dad rode in the ambulance with Abbot Vincent on the way to the Mayo Clinic for treatment,” recalled Pat.

In 1957, the O’Neills named their newborn son “Vincent Daly” after the abbot, who eventually succumbed to the disease. Over the years, the connection between the family and the Trappists remained strong. The clan attended Christmas Mass in the main chapel for a long time. The holy space accommodates guests, but separates the monks from them with a gate.

“I remember how Dad would get up before Mass and he would greet everyone,” recalled Pat.

For decades, the family would interact with the monks during a meal after the liturgy.

“The monks used to give us breakfast for the first 30 years,” recalled Theresa Heim, the 11th of the 13 O’Neill children.

As the facilities at the monastery were upgraded or changed, the location of the Mass changed. The O’Neills now have a private Mass in the guest chapel, which is below the main chapel in another part of the monastery.

Due to the size of the group and ­other factors, the family now has their meal after Mass at local restaurants or at Four Mounds Inn, a facility the O’Neills rent out so that everyone can stay together at the same place while visiting Dubuque. During the Mass, the children of the family usually process with the priest into the chapel. The O’Neills have formed many special memories through the liturgy.

“Christmas, to us, is the monastery,” reflected Heim. “We’ve had three or four baptisms there,” she said.

Father Xavier Dieter, a Trappist originally from Carroll, Iowa, has been saying the private Mass for the O’Neills for the last eight years or so. Now 89, he recalls John O’Neill’s early visits to the monastery.

“I was just a young monk, and I wasn’t a priest yet,” recalled Father Dieter. “I didn’t know (John O’Neill) well. It was only after I became a priest that I got to know him.”

Father Dieter explained that on Christmas, the monks usually hold a midnight Mass. Later that day, there is a Mass, open to the public, at 10:30 a.m. The monks, who operate a casket making business on the site of the monastery to support themselves, are dedicated to a life of prayer and work based on the rules of St. Benedict. Part of their ministry involves serving people who visit them, so there is a guest house on the property.

“In the rule of St. Benedict, which is over 1,500 years old … he says we should welcome guests,” explained Father Dieter. “This could be pilgrims or people walking on the road that would stop by the monastery for food or a place to rest. St. Benedict says ‘we receive them as Christ.’”

The priest is looking forward to saying Mass for the family again this Christmas. He believes their tradition is a powerful witness of how faith is transmitted down through the generations.

“I’m from a large family, and I enjoy being with them,” said Father Dieter.

The O’Neill siblings are hoping to continue coming together for Christmas Mass at the monastery for as long as they can, seeing the tradition as a way to bolster their faith, maintain their family ties, and honor John and Dorothy O’Neill.

“There are 13 of us, and we’re extremely close because of them,” said Heim of her parents.