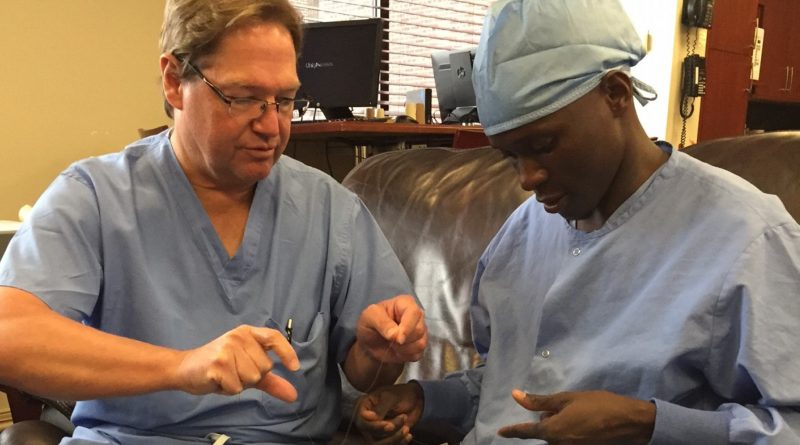 The hospital visit was just one of many stops the 33-year-old from Belle Fontaine, Haiti, is making during his July 21-Aug. 24 trip to the Archdiocese of Dubuque, where he’s observing at area medical facilities in preparation for an internship in Haiti this fall.

Desius is the son of Haitian farmers, who, with his six siblings, grew up in a rural part of what is the poorest nation in the Western Hemisphere.

Having long dreamed of being a doctor, Desius’ medical education has been made possible through the financial support of several eastern Iowa parishes: All Saints Parish in Cedar Rapids, St. John the Baptist Parish in Mt. Vernon, St. Isidore Parish in Springville, and the Heart of Mary Cluster in Vinton, Urbana and Walker.

All Saints has had a sister parish relationship with Desius’ home parish, Notre Dame de Lourdes in Belle Fontaine, for the past 16 years. The Haiti Committee at All Saints conducts fundraisers and organizes the donation of items such as uniforms and school supplies in support of their sister parish. Just this spring, All Saints shipped more than 28,000 meals for children at the parish in Haiti.

As part of their relationship, All Saints sponsors a trip to Iowa by their sister parish priest every three years. Members of the Haiti Committee regularly visit Haiti too. It was during one such visit in 2003 that All Saints parishioners first met Desius. Twenty years old at the time, Desius was a student and teacher in the Haitian village of Ducrabon. He told the All Saints parishioners of his desire to become a doctor.

“Each year we came back he reminded us of his dream and that once he graduated from high school he hoped we could help,” remembered Steve Schmitz, who leads the Haiti Committee at All Saints. “In 2005 when we visited, he was two years away from graduating, so we asked him to begin researching medical colleges in Port-au-Prince (Haiti’s capital).”

The Haiti Committee at the parish began to discern whether it could realistically sustain the cost of sponsoring Desius’ medical education, which would average more than $4,000 per year (at least $2,000 for tuition and another $2,000 for living expenses). Committee members concluded it was possible after they received an offer from St. Mary’s in Vinton to help with the costs. “Together we knew we could provide the tuition assistance as well as living expenses,” Schmitz said. “God provides.”

Other area parishes later joined All Saints and St. Mary’s in contributing toward Desius’ education.

Desius began his studies at Quisqueya University in Port-au-Prince in early 2011.

A year before starting his first classes, Haiti experienced a devastating 7.0 magnitude earthquake that left hundreds of thousands of people dead. To show solidarity with their sister parish, members of All Saints visited Haiti. While there, they met a Carmelite sister who had been sent by her order to Ducrabon to determine if the village was a viable place for a new hospital that Rotary International hoped to build.

“That certainly seemed like God was giving us his blessing for Amilien’s study to become a doctor,” reflected Schmitz.

A hospital was built in Ducrabon, and it is there that Desius, who finished his college coursework earlier this summer, will work as a doctor once he finishes his internship in Cap-Haitien, Haiti, next fall.

Desius said he is looking forward to serving the people of his hometown and the surrounding area in the new facility. “There is a lack of doctors in Haiti, especially in the countryside,” he said. “I want to support the Haitian people; I want to help take care of them.”

His own father’s death in September 2010, due to a lack of adequate healthcare, has given Desius additional inspiration to pursue a medical career. “I want to help people in my hometown, so they won’t die the same way my father did,” he reflected.

Desius said he is gaining a great deal of knowledge while visiting Iowa this summer, which he expects will be useful in his future as a doctor. Before he leaves, he will have spent time observing a wide variety of medical professionals, from a cardiologist to an oncologist to a physical therapist, and will have visited such places as an emergency room, a maternity ward and a community health clinic.

In addition to expanding his medical knowledge, Desius said he is also getting the opportunity to strengthen his English language skills while in the United States. Desius speaks four languages: French and Creole, the two official languages of Haiti, as well as English and some basic Spanish.

His month-long trip has also given Desius the chance to meet and spend time with some of the parishioners who have been supporting him and to share with them face-to-face his appreciation for their generosity. “I am grateful to the benefactors of my education,” Desius said. “I want to say ‘thank you’ and express my deep affection for them.”

While in Iowa, Desius is staying with host families from the parishes. He said everyone has been “very, very welcoming” to him during his visit. On Aug. 7, two dozen parishioners helped him celebrate his birthday with a party, complete with balloons, cake and candles. Others have brought him to local museums, restaurants and events. The monks at New Melleray Abbey gave him a tour. Others will help him explore Chicago for a weekend.

Desius was accompanied on his trip to the archdiocese by Father Marc Claudy Magloire, the former pastor of Notre Dame de Lourdes Parish. Father Magloire served the sister parish for six years (he was recently reassigned) and visited the Archdiocese of Dubuque once before, three years ago.

During this year’s visit, Father Magloire concelebrated Mass at All Saints Parish, as well as at Saint Mary Parish in Vinton, St. Mary Parish in Urbana and St. John the Baptist Parish in Mount Vernon. He and Desius also went on a Year of Mercy pilgrimage to the Cathedral of St. Raphael in Dubuque. He returned to Haiti ahead of Desius on Aug. 2.

Schmitz believes Desius’ and Father Magloire’s visit this summer has meant a great deal to the people of his Cedar Rapids parish and the other area parishes they visited during their stay. “… it certainly puts a face to an email or text message or story that we tell when we return from a visit to Haiti,” he said. “I think it helps confirm that the work the committee does and the support that the parishes provide touches real lives in very real and meaningful ways.”

Any parish in the archdiocese interested in learning more about how to establish a sister parish relationship with a parish in Haiti or elsewhere in the world, can learn more at the Parish Twinning Program of the Americas’ website: www.parishprogram.org.