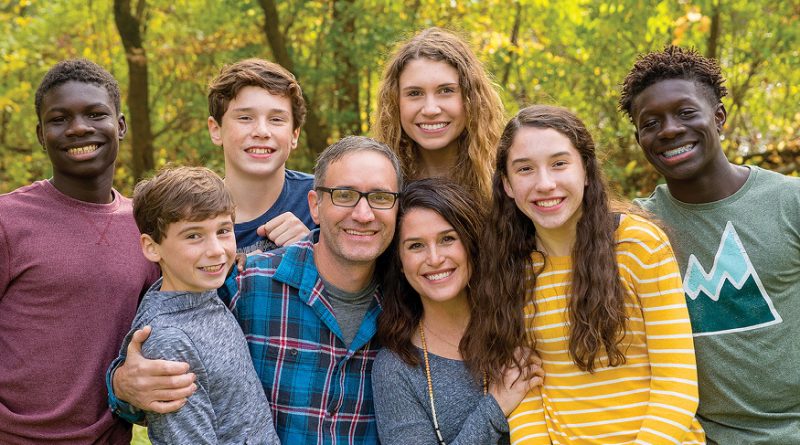 Visit to Haiti leads to adoptions, inspires ideas on fundraising

MT. VERNON — John and Amanda Rhomberg of Mt. Vernon never expected a mission trip to Haiti to change their lives. But when John traveled to the then earthquake-stricken country in 2012, that’s exactly what happened.

It started a process to not only start a new business, called One Mission, but also adding two members to their family through adoption.

“One Mission was really birthed out of our adoption story,” said Amanda of their small business. “John ended up meeting these two little boys right away on his trip to Haiti in 2012, and they had an instant connection. He called me from Haiti and said, ‘It might sound strange, but I met these two boys and I feel like they should be our sons.’”

Amanda said they didn’t know the boys’ story or what would happen next, but they felt a tug to follow their hearts.

“We started calling around to adoption agencies, but at the time, all Haiti adoptions were closed,” Amanda recalled. “Everyone kept telling us it wasn’t a great time to adopt from there. We kept hearing nos.”

“But I really just believe God putting the fire of the Holy Spirit in you to act when he wants you to act is what kept us going,” she said. “Even though those doors were being shut in our face and people told us this wasn’t going to be possible, I started working on all our adoption paperwork anyway.”

In the spring of 2013, an adoption agency contacted the Rhombergs to let them know there was one man in Haiti that could help them. After more phone calls, a substantial financial investment, and lots more paperwork, the Rhombergs flew to Haiti in the summer of 2013 so that Amanda could meet the boys and they could submit their official adoption application.

“It was a huge leap of faith,” she said. “We just felt so certain that these boys were supposed to be part of our family, that this was our path. It was a strong force that pulled us towards them.”

It was also during that visit that the Rhombergs came up with the idea for One Mission.

“When you travel to a Third World country, you see all of these groups there doing wonderful things — some on medical missions, some traveling to orphanages to paint. In our conversation with all these people, the common thread was they wanted to keep doing what they were doing as long as they could keep fundraising for their cause. So on that plane ride home, we started brainstorming how to plug into that because we thought it was so cool.”

The couple, who are members of St. John the Baptist Parish in Mt. Vernon, also have four biological children. They had done a fair amount of product fundraising in the past.

“We thought what if we came up with a product assortment that was really cool and stuff that people wanted and would make great gifts and then if 40 percent of that went to a cause,” said Amanda. “We looked at all the options out there and just combined all the best ideas, like crowdfunding, custom products and product fundraising into one platform and created One Mission. We thought it would be a fun business that would be purposeful and have so much meaning.”

As they worked through the adoption process, they started One Mission at the end of 2013 and launched their website July 1, 2014. Through their website, individuals and groups — adoptive families, youth groups, churches, mission teams, medical causes and nonprofits — can create a fund to raise money for their cause through either direct donations, with 100 percent going to the fund, or through product purchases, with 40 percent of proceeds going to the fund. One Mission has created a whole line of T-shirts, mugs, notecards, art prints, candles and more that individuals can purchase.

It’s easy to start a fund right from the One Mission homepage. Rhomberg said there is a vetting process for applications that come through the site. Once the fund is approved, there is a fund ambassador who works closely with that group to see if they want custom products.

“We work with good causes, someone making a difference for someone else,” she said. “We like to use the word ‘world changers.’ The people we get to work with are amazing. They are all good people trying to do good work, and it is so fulfilling.”

Amanda said “word of mouth” marketing has been the best way to get the word out to date. “One successful fund will lead to another successful fund as time goes on,” she explained. “It’s shopping and giving at its best.”

“We operate like a normal screen printer. If a church raises money with us, it’s very common to have them come back to us to have us print their 5K race, Vacation Bible School or NCYC shirts as well. We can help get branded products out to your supporters, and we’d really love to grow our business that way, too,” she said.

Amanda said they are excited for all they have in store for the business this year. And in the meantime, the Rhomberg family has settled in as well. Their oldest children have worked during the summer for the family business. The younger kids spend plenty of time at the shop, Amanda said. They were able to bring their sons home from Haiti in July of 2016, four years after meeting them.

“The boys are adjusting so well. This community has been fantastic in welcoming them with open arms and supporting us,” said the mother.

The Rhombergs have experienced grace during the adoption process and through their business. They strive to integrate their Catholic faith into daily life.

“We feel so grateful,” she added. “Our faith is a huge part of our lives, and we try our best to instill that in our kids by our actions and how we live. My word for this whole process has been trust. We have just followed our nudges and believed God is in this with us and he is leading us on that path he wants us to be on. It hasn’t been easy … financially or emotionally, but it’s amazing to me how God has brought us the right people at the right time. There were so many moments where things just worked out. God is definitely in all the details. If you are open to feeling the nudge of the Holy Spirit, you know what path you need to take. That can apply to big decisions and everyday small decisions. You just have to trust. His plans for us are far better than the plans we make for ourselves.”

To learn more about One Mission, visit https://onemission.fund/.

Amanda and John Rhomberg of St. John the Baptist Parish in Mt. Vernon pose with their six kids, including the two boys adopted from Haiti. (Contributed photo) 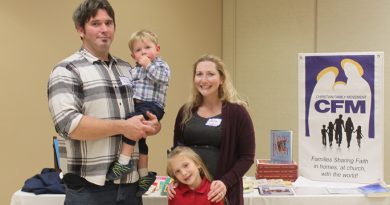 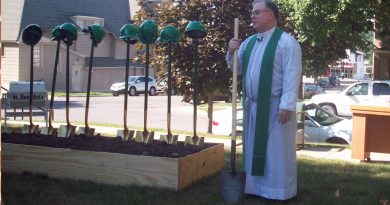