DUBUQUE — Casey Reekie, owner of  M.J. Knippel Church and Religious Supply Company is the fourth generation of her family to operate a business that has served the needs of Catholics and other Christians in the Dubuque area for over 110 years.

She enjoys chatting and laughing with customers, but as she prepares to close the shop on Main Street for the last time at the end of October, her smiles have been tempered with tears.

“It’s very hard,” said Reekie. “This is my life. I was born here. I go to work ­every day with my great-grandfather, my grandmother and my father.  I touch the same cases. I sit at the same desk. I’m going to have to take the memories with me. I’ve gotten very close to the regular customers. Some of them are like family to me.”

Antique cabinets filled with statues of saints or nativity sets line the show room, along with personalized rosaries Reekie creates herself, prayer books, sacramentals and other gifts for first communion, Easter or any other spiritual occasion.

The back room and basement contains more inventory — chalices, candlesticks, monstrances and clerical robes. Drawers are filled with lithographs and other sacred art, some dating back to the 19th century. A stack of old palms, a palm cutter and even a pan used to burn the left over palms so they could be used for Ash Wednesday are part of a collection of things used to express faith in all its aspects.

“(The store) has gotten us to interact in our religion a lot, including regular church and religious ed,” said Reekie, a member of Nativity Parish. “I taught religious ed for 17 years … and taught the religious awards for boy scouts. The store has drawn us to God is what it has done.”

Mathias Jeremiah Knippel, Reekie’s great-grandfather, was the business founder. Born in West Bend, Wisconsin in 1863, the son of German immigrants, he attended Pio Nono College for teachers and organists. As a young man, Knippel married Elizabeth Knetzger. The couple moved to Iowa in 1886 so Mathias could serve as a teacher and organist at SS. Peter and Paul Church in  Petersburg. In 1890, the Knippels moved to Dyersville, where Mathias took on the role of principal at a boys school connected to St. Francis Church, now the Basilica of St. Francis Xavier, until 1902.

Knippel’s obituary from 1937 describes him as a “pioneer in Catholic education” who “taught elementary Latin to a number of future priests.”

In 1902, the Knippels, who eventually had four children, moved to Dubuque where Mathias took a job at T.F. Phillips church supply firm. In 1907, he opened his own store at 453 Main Street, which he ran until his death.

In the 1910s, Mathias began training his daughter Cecil Catherine to take over the business. It was unusual to choose a daughter to succeed him in those days. Reekie said that her granduncle Edward “was a wild one” and her grandmother had a talent for business. Cecil adapted to the times, sometimes even altering her first name to appear like a man’s on paperwork so suppliers wouldn’t hassle her about being female, according to Reekie.

“My grandmother got married in 1921 and brought my grandfather into the business,” said Reekie. “They had three children.”

Cecil and William’s  boys served in the army during World War II.

“When my dad passed 18 years ago, we found a shoebox of letters in his basement that he got from WWII that my grandmother would send,” recalled Reekie. “She’s writing in 1945, and I’m opening up these letters in 1995. It was Easter time and I’m doing the exact same thing she had been doing — the palm orders.”

William and James O’Rourke took over the business in 1946. Eventually, James left, leaving Reekie’s father and mother in charge.

Reekie and her three sisters grew up in and around the store.

“I remember we would work for a nickel an hour when we were next to the Grand Theater,” said Reekie. “Movies were a quarter, so if we worked 4 hours, (dad) would give us a quarter and we would go to the movies.”

In the 1960s, the store moved to its current location. When William and his wife divorced in 1965, Reekie and her sisters moved with their mother to Chicago. At age 16, Reekie moved back to Dubuque to live with her dad again — working in the business at a second store location on 8th Street in the 1970s. The expansion store was opened with the help of Olivia Tegler, a family friend. Reekie studied accounting at a local community college, now called NICC. While working at a local hotel in her 20s, Reekie met her husband Ed, who, was a long haul trucker from Boston. The two dated long distance for two years before marrying in 1986.

“I liked it here,” said Ed Reekie. “When you’d wave at somebody on the side of the road they’d wave back.”

Ed had trouble finding work in the area, however, so he and his wife moved to Boston for seven years. While there, they had two sons. Two years later, Reekie’s father became sick. He hired employees to run the store and wasn’t able to set foot in it for several years due to illness.

Reekie decided to return in 1993 to  Dubuque to care for her father. He asked her to check on the store. When she and Ed walked in, they found the employees gone, the store in serious disrepair, and inventory missing.

“I found (an employee) was stealing money,” recalled Reekie.

Reekie never expected to come back to the store. With her dad unable to work, she decided to take on the challenge of running the business.

Ed helped to repair and renovate the facility, while Reekie made other needed reforms. The Reekies raised their children in and around the store. Being involved in the business helped Ed develop  his faith.

“Ed was not even baptized when we took over the store,” recalled his wife. “He came into the church on his own when he was ready. He became part of the church community, serving in scouts as a leader or assistant for 18 years.”

Reekie has decided to close the business for several reasons, including her own health issues and the fact that sales are down due to internet-based competition. She will have a liquidation sale through Oct. 31. She is grateful that the business provided her and her family a way to make a living, serve God, and connect with the community.

“Many people just come in to visit on a regular basis,” said Reekie. “And people that have moved away can always reconnect. I will miss that so much.”

Cover Photo: Casey Reekie (left) and her husband, Ed, are shown in front of the store her great-grandfather founded in Dubuque. She plans to close the store in October. (Photo by Dan Russo/The Witness) 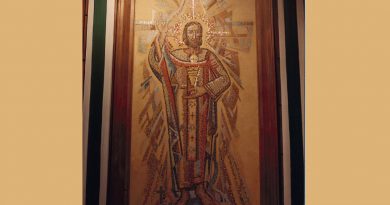 Parish celebrates anniversary of first Mass in its church 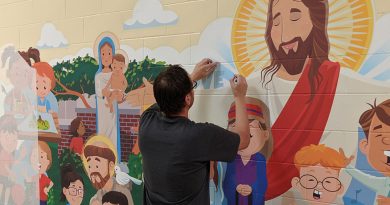 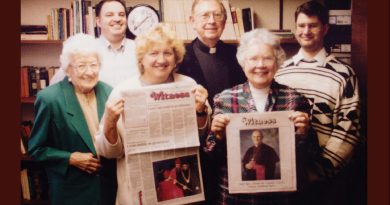