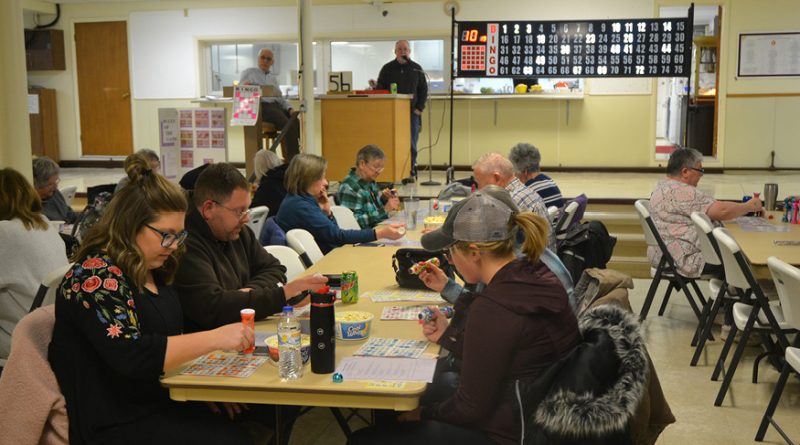 DYERSVILLE — “G-52!” announced the caller on stage at a recent bingo night at St. Francis Xavier’s parish hall in Dyersville, revealing to the roomful of players the next square they could mark on their bingo cards. At the basilica, as in a number of other places around the Archdiocese of Dubuque, bingo serves as a key social event and an important parish fundraiser.

Bingo is held in Dyersville on Thursday nights at 7 p.m. from mid-January to mid-December in the church’s basement. Each night of bingo is comprised of multiple rounds of the game with winners receiving cash payouts of various amounts. There are different types of bingo games played and progressive jackpots that build weekly, which is similar in format to most bingo programs around the archdiocese.

At St. Francis Xavier Parish, bingo draws a crowd that averages more than 50 people a night and includes a mix of individuals, couples, families, and groups of friends attending together.

“We have many regular players; however, we love to see new faces each week,” said Shirley Pirc, one of the chairpersons of the parish’s bingo program. “Our players come from all our surrounding towns and as far away as Anamosa on a weekly basis.”

Pirc is one of eight bingo chairpersons and is joined by four callers and about 60 other additional volunteers that make bingo possible at the parish. Bingo at St. Francis Xavier acts as a fundraiser, but also serves as a chance for participants to build community.

“The players and volunteers have become like one big family that look forward to getting together weekly to catch up with each other,” Pirc said.

In 2014, when a member of the bingo community — chairperson Deb ­Tegeler — passed away, her family donated money to upgrade the parish’s bingo equipment and the bingo committee started a bingo game called “T” bingo in her memory.

“Deb was very dedicated to our bingo program for many years,” Pirc reflected, “and now we remember her every Thursday night with the ‘T’ bingo game that was appropriately named for Deb Tegeler.”

Making a Mark in Ossian

Further north in Ossian, bingo is also popular at St. Francis de Sales Parish. It is held there on Sunday evenings in the school gymnasium, where early bird games begin at 6 p.m. and regular bingo games start a half an hour later.

Lifelong St. Francis de Sales parishion­er Joan Ameling serves as the chairperson for the parish’s bingo program; she said she sees her time spent helping with bingo as a donation to the church. Ameling is assisted by a bingo committee consisting of about 20 people and also circles of parishioner volunteers that help make the games possible.

“As a whole, bingo is a lot of work,” Ameling said, “but when you have good people that are willing to donate their time … it works out really well.”

Bingo at Ossian draws around 40 people each night, most of them individuals from outside the parish. Ameling said of those who attend, “I think it is a way for people to get out, and a lot of the ones that come, come in a group of three or four, and so it is an opportunity for them to get together and see each other and also something fun for them to do that doesn’t cost that much to play.”

An extra incentive to come out for bingo night at Ossian is the food. The parish offers a lunch stand at bingo that includes hot sandwiches, such as chicken and maid rites, as well as other snacks and desserts, most of which are made and donated by the parish’s circles and bingo committee members.

“A lot of the people that come eat supper there,” Ameling said, “so they love that we do lunch and get some goodies they wouldn’t make themselves.”

Ameling said the impact the bingo program has on the parish is substantial. “It is a good fundraiser for our parish, which a lot of goes to support our school system,” she said, the “average for a year is $9,000-10,000 a year.”

Doubling It Up in Cedar Rapids

In Cedar Rapids, at St. Ludmila Parish, bingo is held not once, but twice a week — on Sundays at 5 p.m. and Tuesdays at 6:30 p.m. Each of the four-hour sessions of bingo takes place in the parish school’s cafeteria/
auditorium. A full concession stand is also offered, which includes “home-cooked” specials such as casserole or soup.

On an average Sunday night — which is the busier of the two nights it is offered — there are approximately 250 people playing bingo at St. Ludmila’s, with individuals coming from all over Cedar Rapids, as well as other places such as Iowa City, Mt. Vernon and even Waterloo.

“It’s a social gathering, and many players have played for many years together,” said Karen Billick, one of the parish’s bingo coordinators. “We all notice when someone ‘isn’t at bingo.’ We get to know family dynamics, learn of upcoming medical procedures and like to share with each other if someone has passed away.”

Organizing bingo two nights a week for such a large volume of players is a rather big undertaking for the parish. Billick co-coordinates the program with fellow parishioner Carolyn Schulte, and the two are responsible for scheduling personnel, which includes other volunteers, but also hired sellers and callers and even security.

Billick said that bingo started at the parish about 50 years ago, around the time the state of Iowa changed the laws to allow charitable gambling. The parish applied for and was granted a license shortly after the change in law. The program has been an important fundraiser for the parish in the years since then.

“All the money we raise with bingo goes towards our Catholic school subsidy,” said Billick, whose own children attended St. Ludmila Elementary and said she supports the bingo program as a volunteer so future generations can also benefit from a Catholic education.

Many of those who come each week for bingo at St. Ludmila’s are passionate about the game — Billick compares their enthusiasm, and sometimes their superstitions, to those of sports fans. “They have their good luck charms,” she said, “like to sit in the same place, don’t like a lot of talking or cell phones going off during play.”

“Bingo is a ‘safe place,’ gathering with their friends, getting a home-cooked meal for the night and winning a little money if they are lucky,” Billick added.

Ed Welu took his place behind the bingo machine in Holy Ghost Church basement March 5 with the confidence only decades of experience in the caller’s chair can provide. Before getting down to the business of calling, he began yodeling. His voice blared like a crack of lightning through the crowded hall; his pitch varying with an expert precision that has won him multiple yodeling competitions. For decades he’s put his talent to work serenading bingo players.

“I do that instead of singing happy birthday,” he said, explaining that one of the regulars was celebrating that night.

Holy Spirit Parish, which consists of three churches, including Holy Ghost, is the last Catholic church to host bingo in Dubuque, a city with a vibrant bingo history. When the state of Iowa legalized bingo for charities in the 1960s, every parish took a night, according to Welu. Some other nonprofits, including Wahlert Catholic High School, also hosted games. For a while, bingo was one of the hottest forms of entertainment in town.

Over time, the demands of finding enough volunteers and other competing types of social outlets diluted the pool of players, until only three games remained: Holy Spirit’s, Knights of Columbus 510’s and the Tri-State Blind Society’s. Thanks to upgrades to their bingo technology, a good food menu, the dedication of volun­teers and the passion of players, Holy Spirit’s bingo has survived.

“I grew up around it,” said regular player Candy Harris. “Playing brings back fond memories of playing with my mom and grandmom.”

For some participants like Teri Richardson, the nights out offer a chance for camaraderie in a culture that has a style all its own. She came recently sporting a shirt with the words “Bingo Boss” and brought a homemade hand on a stick that she raises when she wins.

“My daughter and granddaughter made it for me,” she said.

On the parish’s most recent bingo night, over 120 players came out. Welu, who is in charge of callers, is one of a volunteer crew of over 20 per night that each have specific jobs.

“Callers were always hard to come by because they didn’t like the criticism,” he said. “People will tell you you’re going too fast, too slow or too loud.  You’ve got to have a thick skin.”

Callers are the “performers” on stage in a bingo hall, but they couldn’t do what they do without the supporting cast of kitchen workers, bingo card sales people and others.

“The best part about (volunteering) is knowing the people,” said Lisa ­Loomis, who has been preparing food in the kitchen for about a decade. “Sometimes we know what they want before they even come up to the counter and have it ready for them.”

Behind the scenes, serious responsibilities must be met to make any bingo night run smoothly. The Iowa Department of Inspections and Appeals oversees social and charitable gambling. Organizations usually apply for two-year licenses, file reports on an annual basis with the state and track income.

“We pay sales tax on all the money we take in from bingo,” explained Rich ­Ewers.

Ewers and his wife, Rae, coordinate a lot of the administrative work. Every single bingo card, for example, has an identifying number on it.

“I have to keep track of how many pieces of paper we have around here at all times,” said Rae Ewers.

Holy Spirit holds 28 regular bingo games per night beginning at 7 p.m., plus warm up games prior to that. Dinner and snacks are served, and many players show up hours early to find a good spot and play cards or other games with friends. Through the bingo program, the parish has been able to raise funds to pay for many important projects, including an elevator for persons with disabilities, a new basement floor and other projects at all three churches.

“The best part is that we’re able to do so much for the church,” said Rae Ewers.

Despite seeing the financial good ­bingo does, the Ewers are just as dedicated to volunteering for the social benefits it provides.

“The community aspect is an equal part of it,” said Rich Ewers.

Players at St. Francis Xavier Parish manage their bingo cards as a caller announces the latest number Feb. 28. The illuminated board to the caller’s left helps people keep track of the numbers called and what patterns they are going for in a particular round. Shapes can vary from a simple five across to a ‘T’ or a full ‘blackout’ of the card. (Photo by Jill Kruse-Domeyer/The Witness) 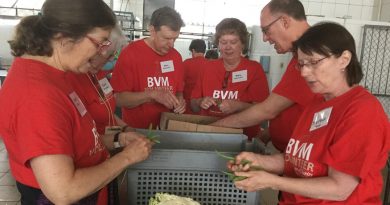 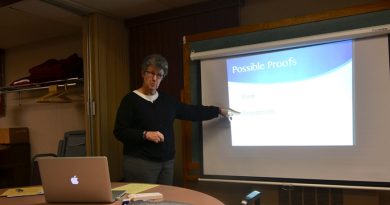