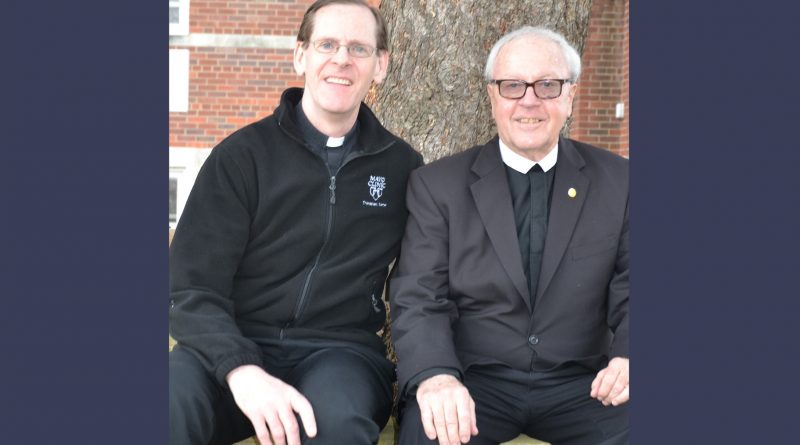 DUBUQUE — Father Scott Bullock and Brother Stephen Markham are forever bonded since the June 16, 2016 kidney transplant that has changed them both physically and spiritually.

“It is without a doubt the greatest gift you can give anyone,” said Brother Stephen of organ transplantation.

The two men recently sat down for an interview about 14 months after the priest read an article in The Witness about his friend’s predicament that put him on the path to becoming a donor.

“It was a great experience,” said Father Bullock of the transplant. “I jokingly say to people ‘I highly recommend it’, but I really do. It really was not that hard and the benefits are so huge.”

Despite a major post-operative complication and a few other issues, both Father Bullock and Brother Stephen are doing quite well.

“I actually have more energy than I did for a year or a year and a half before the surgery,” said the brother. “Having been told right before I got on dialysis that if I didn’t get on dialysis I had a very short time to live, and having been very, very sick at that time, you just look at everything differently. There are things that at one time in my life would have been a drama, and now it’s like, ‘we can deal with this.’ The sense of gratitude of things you otherwise take for granted is just really powerful. I can’t say enough how grateful I am for all the wonderful people, but also, for the wonderful things in life.”

In 2015, the De LaSalle Christian Brother, now living in Balltown, was serving in Chicago as director of vocation ministry for his order and had just been appointed as vice provincial when he got news his kidneys were failing. Eventually, after medications didn’t stop the process, his doctors encouraged him to seek a live donor.

“I was resistant to ask to go for a transplant,” said Brother Stephen. “I said, ‘I really don’t want to take somebody else’s kidney, and the doctor says, ‘you really need to.’ I have to admit (the transplant) gave me a new life.”

Before the procedure, the 72-year-old could barely walk and was drained of energy. Now he walks about three miles a day and has returned to part-time work for his order as director of temporary professed brothers and postulants. He works out of St. Mary’s University, a Christian Brothers institution in Winona, Minnesota. The road to where he is now from where he was proved difficult.

From March of 2015 until the surgery, the native of Rickardsville, had been dependent on kidney dialysis to survive. A flare up of chronic glomerilo-nephritis, a kidney disease he has had since age 14, caused his organs to fail. Brother Stephen sent out word of his need through his religious order, parish bulletins and through doing an interview with The Witness. The article in the Jan. 17, 2016, issue caught the eye of Father Bullock.

The priest, now pastor at St. Edward Parish in Waterloo, became friends with Brother Stephen when they were both serving together for three years (1999- 2002) at St. Catherine and St. Donatus parishes — the former as sacramental priest and the latter as pastoral administrator. After completing a battery of tests at the Mayo Clinic in Rochester, Minnesota, the priest made the prayerful decision to give his kidney to his friend.

“There’s a sublime joy in laying down yourself and giving of yourself. The more you can do that, the better life is,” said Father Bullock.

On the day of the surgery, Father Bullock and Brother Stephen were in neighboring operating rooms for a procedure that lasted about two hours. The priest’s left kidney went into the brother’s right side. Today small scars are visible on each man’s body.

“I remember amazingly feeling quite calm (the day of the surgery),” said Brother Stephen.

That feeling changed two days later when Brother Stephen had a heart attack during another procedure where medication was being infused directly into his heart to kick-start his new organ. He was in the intensive care unit for 24 hours afterwards.

“I put on a real show,” recalled Brother Stephen of the heart attack. “I lost all control of my body and I had a lot of attention. That was the scariest part of it all. I was conscious enough to hear what they were saying. I could hear the nurses giving directions and one of the directions was call his family … I really thought it might be it, but then they put me under again; by the time I came to, I didn’t feel pain.”

It is common for a transplanted kidney to take a few days to activate, but by June 21, five days after the surgery, Brother Stephen’s wasn’t yet working, so doctors were planning to put him through the same procedure that had caused his earlier heart attack. When Father Bullock found out about this, he began to pray for divine assistance.

“In my normal prayers, I looked at the calendar of feast days,” said the priest. “The saint of the feast day (June 21) was St. Aloysius Gonzaga. In reading his biography I discovered that he himself had suffered from kidney disease. It ended up taking his life ultimately with other things. Kind of in a moment of desperation I said, ‘Aloysius, help us out!’”

On that day, Brother Stephen’s new kidney started on its own, preventing the need for the second risky procedure. Both men acknowledge that it could have been the medication from the earlier procedure that could have jump-started the organ, but they believe the saint’s intercession was involved in prompting the kidney to work.

“Scott gave me a beautiful icon of St. Aloysius Gonzaga, which now hangs over what I now call my ‘pharmacy,’” said Brother Stephen. “It’s a desk that has nothing but all my medicines. Aloysius Gonzaga is right there looking down on the medicines.”

Father Bullock had his own struggle to deal with through the course of the surgery and recovery. His mother had been ill, and died June 23, shortly after the transplant. Despite his weakened condition, he traveled by plane to his hometown and was able to celebrate the funeral Mass June 30.

“I had some generous women in the parish that sought to be my nurses, and they were very good, but my mother’s death changed everything,” he said.

Father Bullock’s recovery was relatively quick — the avid cyclist was back to riding his bike within a month. Brother Stephen’s recovery took longer — about three months. Both men are thankful for their lives and the doctors, nurses and many other people that supported them through the transplant process.

“(This experience) taught me and reaffirmed my desire to just keep giving,” said the priest. “It’s the way to live fully. Clinging to life and trying to preserve it and protect it, that’s not living. If you give (your life) away, you’re going to be OK. (Organ donation) is a great thing to do and, I believe, really consistent with our faith.” 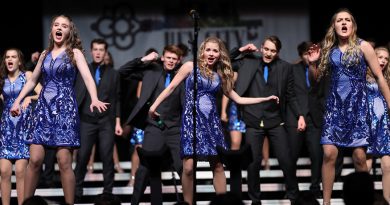 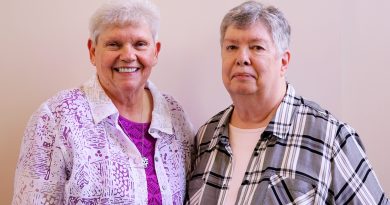 Get to know the new deacons being ordained July 20