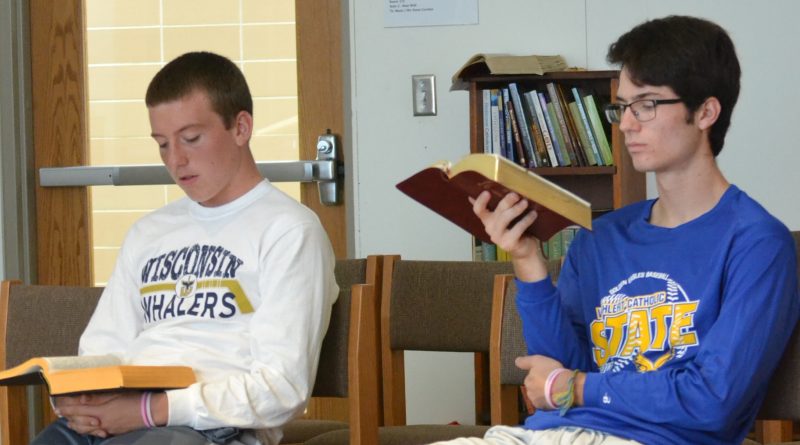 DUBUQUE — Wahlert Catholic High School junior Jack Doyle said the Bible study held at his school’s chapel each week offers him an experience he doesn’t get anywhere else.

“Bible study is a place I can go and discuss God and my faith with people I barely know and probably wouldn’t have talked to otherwise,” he reflected. “And I end up having conversations with them that I probably haven’t had with some of my closest friends.”

“That’s why I love our study, and it always keeps me coming back,” he added.

Doyle is one of a growing number of young people at Wahlert who are taking time out of their already busy student schedules to gather together for an extracurricular Bible study offered by their school every Tuesday evening.

“We’re trying to provide an opportunity — to be a time and a place and a space — for students to be able to intimately get to know Jesus Christ, to understand him more,” said Wahlert religion teacher Nathaniel Gee, who leads the young men’s Bible study group each week.

Wahlert’s evening Bible study sessions began in the spring of 2015, after a small group of young men who had just recently participated in a retreat, approached Gee, looking for ways they might continue to grow in their faith and in their relationship with Christ. Gee offered the idea of a Bible study and asked the students to pray about it and discern whether that might be something they wanted to pursue.

“They came back to me and said that they would absolutely love it,” remembered Gee. “This really came from their desire and their initiation. They’ve owned this.”

Gee describes the approach he uses when leading the young men in study as “very organic.” When working through a book of the Bible, students are asked to look at one verse or section at a time, entering deeply into the selected passages and expressing what stands out to them, what they’re drawn to or can relate to, and are encouraged to ask questions or raise topics that naturally come up.

Though Gee said he prepares for each Bible study session and brings with him various scriptural commentaries, he said the students rarely require much help from him.

“I’m there to provide them with solid direction. But the students are so incredible and are so open and the Holy Spirit is so alive in them that honestly there are times I barely have to facilitate at all,” he said.

Last school year, Wahlert began offering a Bible study for its female students as well. Caitlin Hansen, a senior at Loras College majoring in religious studies, is facilitating the women’s group this academic year. The women’s Bible study has followed a method that combines the reading of Scripture with a topical format.

During most weeks, the men and women meet separately for their one-hour Bible study sessions.

“We do that for the sake of being able to have conversations that are very specific to men’s struggles or women’s struggles, to allow them to have some of those vulnerable conversations when they arise, and as they are needed, at an age when that is so important. Very rarely do they get a chance to comfortably and faithfully have those authentic conversations with each other. We’re providing that space for brotherhood and sisterhood,” Gee said.

On the first Tuesday of each month, though, the men and the women come together for a joint session.

“We recognize there remains a need to grow with one another, which is why we meet collectively once a month to still have those touch points,” said Gee.

The Bible study groups maintain a “join us when you can” policy. Students are always welcome to participate, but it is understood that the many other commitments students have may prevent them from coming on any given Tuesday, so the numbers who participate fluctuate from week to week. Gee said when the Bible study sessions first began, there were evenings when it would be just him and one or two students. On well-attended nights, however, there have been as many as 30 to 40 students participating.

Though sessions usually take place at the Wahlert chapel, on days when the weather is especially nice, the group has been known to meet instead at a nearby park. Father Alan Dietzenbach, who serves as Wahlert’s chaplain, joins students for Bible study when he is able. There have been times also when the group has decided to forgo Bible study for the week, and participants have asked Father Dietzenbach to celebrate Mass with them in its place.

Gee said, “We’ve tried to use this as an opportunity for them to encounter more sacred, holy places and expand their experience of faith.”

Students read the Bible after school in Wahlert’s chapel Sept. 19 during a weekly meeting of a study group. (Photo by Jill Kruse/The Witness) 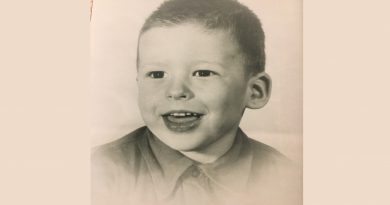 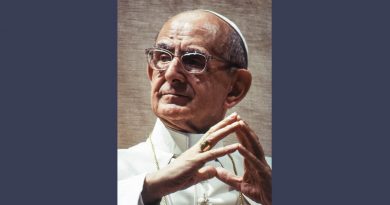 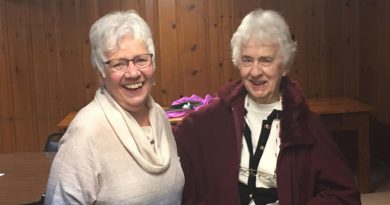