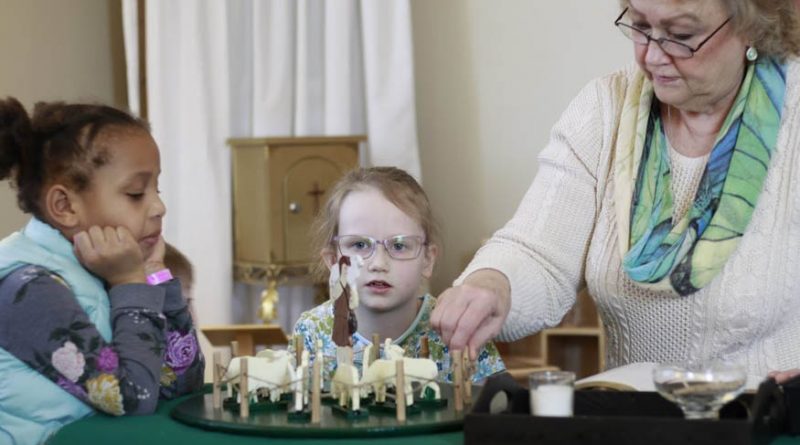 CEDAR RAPIDS — Most Catholics probably haven’t ever heard of  “epicle­sis,” but if you ask a child who has been through the Catechesis of the Good Shepherd (CGS) program what the word means, they’d probably be able to explain it.

“We do this beautiful gesture,” said Geralyn Ward, director of religious education at St. Patrick Parish in Cedar Rapids. “You reach up to heaven. God comes down. (Children who have been through CGS) are so in tune with the Mass.”

“Epiclesis” refers to the moment in the liturgy where the priest reaches up and then puts his hands over the bread and wine, invoking the Holy Spirit to change them into Christ’s body and blood.  Despite their youth, the participants in CGS are able to learn this concept and other essential components of the faith through their own hands-on experiences. Learning takes place in a space called an “atrium” with a small group. There is no classroom or tests in the usual sense. Children are given the freedom to learn independently using activities and exercises within a structure provided in the atrium.

“An atrium is a place of prayer in which work and study take place,” said Ward, whose parish began using CGS about a year ago. ”The catechist gets out of the way. It’s Jesus speaking to both of us. It’s more experienced based than text book learning. It’s basically based around the Bible, the liturgy, prayers and sacraments.”

A lesson on the liturgical year, for example, might involve bringing in the actual chasubles worn during Mass. A lesson on the Eucharist might give children the ability to touch the items such as the chalice or ciborium that are present on the altar.

The program is currently being tried in a growing number of parishes in the Archdiocese of Dubuque, including some in Cedar Rapids, Rockford, Waverly and Ames.

“Sessions include presentation by the catechist with plenty of time for the child to ‘work’ with materials placed at their disposal, allowing the child to meditate and absorb the theme presented,” explained Joanne Pohland, director of catechetical services for the archdiocese. “All of this leads to the development of the religious life (for both the child and the catechist). CGS is in harmony with the universal church by following the liturgical year.  The Eucharist is central to the process. In addition, catechists work together, so they do not feel as isolated in their role.”

CGS was developed Italian Scripture scholar Sophia Caveletti and her collaborator Gianna Gobbi, who applied the Montessori method of experience based independent education to catechesis for youth ages 3 through 12. Since CGS began in the 1950s, it has expanded into 37 countries, including the United States.

St. Patrick Parish, Cedar Rapids, is one of the locations locally offering training in CGS, but it is relatively new in trying it. One of the first parishes in the archdiocese to try CGS was Holy Name in Rockford, which is linked with St. Mary, Greene, and St. Mary, Roseville. It came to the community through the interest of Monica Miller, a catechist at Holy Name for the last seven years.

“Fourteen years ago I was a new DRE at a parish in Des Moines, when a young mother introduced herself to me, raved about CGS and invited me to visit a training she was in,” recalled Miller. “I gave her the benefit of the doubt and showed up over the lunch break where I was able to see my first atrium … for the youngest children ages 3-6. I was captivated by the hands-on, simple, yet, beautiful, wooden manipulatives like a miniature altar com­plete with brass chalice, paten and tabernacle. She then presented a Bible story as we do exactly with the children. It was the parable of the kingdom of God and the pearl of great price. I saw immediately that a simple story, only a few verses long, that was so familiar, was at one time accessible to the youngest children and, yet, held a richness that opened a new avenue of understanding for the adult.”

When Miller and her husband, Deacon Matt Miller, moved to the Greene area 11 years ago, they asked Father Jim Dubert if he would be open to trying CGS for the youth of the parish.

“He was open to it and suggested we begin at Holy Name in Rockford, which was linked at the time, because there were more families and children,” said Miller.

She enlisted the help of a fellow parishioner, who elected to do the 90-hour training course required for all CGS catechists in Des Moines. Catechists are trained in one of three levels, each tailored to the age groups 3-6 years, 7-9 years, or 9-12 years. The first level focuses on building a relationship with Jesus, while the second and third cover salvation history and other more advanced topics appropriate for the age groups.

“For the adults who are willing to invest 90 hours of training to become catechists, it enriches their relationship with God, enlivens the Bible and the Mass, and encourages them to build their own domestic church,” said Miller.

Holy Name currently offers levels one through three of CGS, with nine children in each of two atriums. Four adults are trained to facilitate. St. Mary in Greene is now considering trying CGS also.

Miller believes CGS has had a profound effect on the souls of all involved at her parish.

“One year I gathered the children in my atrium around a mat on the floor and asked them to bring something that reminded them how much they are loved by God,” said Miller. “One boy, 9 years old, remained seated. He was a boy whom three years previously had asked me who the man on the cross was, having received no religious formation at home.”

“That day he asked if he could bring himself,” Miller  said. “I said yes and he put his feet on the mat. The other children returned with their items and explained why they brought them, things a catechist would hope and expect them to choose: a model ciborium, a crucifix, a statue of the Good Shepherd, a Bible, a baby Jesus in a manger, etc. When it was the boy’s turn he said, ‘I brought myself, because the light of Christ shines in me and everyone can see it.’ I asked if it shined in him only. He paused a moment before responding, ‘No, it shines through everyone, because everyone is part of the true vine.’”

St. Mary in Waverly is the latest parish in the archdiocese to try the CGS program. Catechists will begin using it in September for the first time. Michelle Stone, director of faith formation, became interested in the approach after she read a book by Sophia Cavaletti as part of her studies for a master’s degree.

“It’s an answer to a lot of the issues we see with traditional catechesis,” said Stone. “It seeks first to build a relationship between the child and God. I think a large part of (the issue) is our faith formation is largely intellectual and doesn’t help our children form a relationship.”

Stone said she observed the numbers of children in the catechesis program at the parish where she grew up decrease from the time she was a child, so she was open to trying new approaches as a faith formation director. One of the advantages of CGS, Stone believes, is the impact it has on adult catechists as well as children.

“The adults go through a formation program that develops their relationship with God,” she said. I’ve grown so much through this process. Every weekend, it’s really a retreat in itself. I feel I grow closer to the Lord. I have a new and fresh perspective on the church.”

St. Mary has about 30 children in each grade of its faith formation program. Five catechists are being trained this summer and two more during the coming school year.

Although CGS is being used more widely, most parishes, both in the Archdiocese of Dubuque and nationally, still use traditional catechesis programs, either through weekly classroom meetings during the school year or more extended summer style programs, which can also be effective, according to Pohland.

“I think parishes and programs that are willing to try CGS understand that their children learn in different ways,” said Pohland. “The traditional ‘classroom model’ of religious education is not the only way to offer formation to children. Each parish can consider how they can best serve their parishioners.”

Cover Photo: A catechist works with two children during a lesson at the Catechesis of the Good Shepherd program at St. Patrick Parish in Cedar Rapids. Level 1 of the program focuses on helping children ages 3-6 build a relationship with Jesus as the Good Shepherd through prayer, Scripture reading, contemplation, and activities such as the one above where a figure representing the shepherd is shown with his sheep. (Contributed photos) 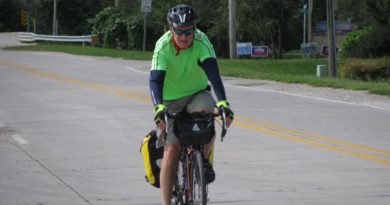 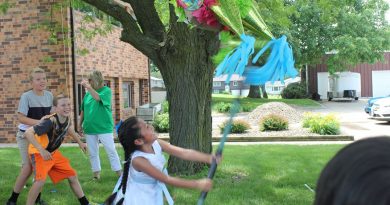 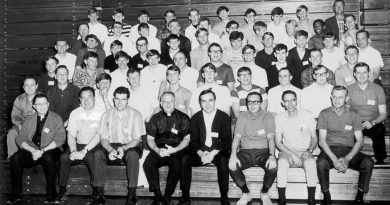