Flesh of my flesh

Shall a man divorce his wife! 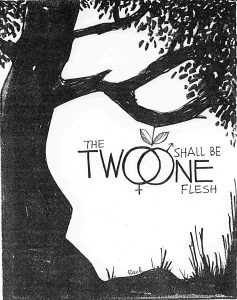 Today we come to Jesus’ teaching on divorce. It seems to begin with divorce as it was practiced in Judea at the time. “The Pharisees approached Jesus and asked, ‘Is it lawful for a husband to divorce his wife?’ He said to them in reply, ‘What did Moses command you?’ They replied, ‘Moses permitted a husband to write a bill of divorce and dismiss her.’”

Notice that only the husband initiated divorce proceedings. The system was an invitation to serial polygamy, exercised by the husband. Jesus’ answer implies that he considered this a violation of true partnership. Sensitive to the plight of the woman in this arrangement, Jesus cites the Genesis passage about the complimentary nature of the sexes: “Because of the hardness of your hearts he wrote you this commandment. But from the beginning of creation, God made them male and female. For this reason a man shall leave his father and mother and be joined to his wife, and the two shall become one flesh.” If each reaches completion in relation to the other, partnership is implied.

Mark, however, is writing for non-Judeans as well. Roman law permitted wives also to file for divorce. In this situation, the original thrust of Jesus’ message is blurred. The criticism of “men-only” is no longer behind the criticism of divorce. Yet Mark wants to transmit the teaching of Jesus. And so, for a different audience, he attaches a rider that includes wives seeking divorce, though this was not part of the original teaching: “… and if she divorces her husband and marries another, she commits adultery.”

But now the meaning has shifted slightly. No longer about inequality in marriage, it focuses on the permanence of marriage. This too is part of Jesus’ message. But he was affirming it in support of the partnership. If a relationship of true equality, grounded in the complementary nature of marriage, so that the two “become one flesh,” then it completes each in the partnership. And with a true completion, the need for divorce dissolves.

What Jesus taught as a reason for mutuality in marriage now becomes, with Mark, a law about divorce. The practice stays the same, but the reason changes. What came from love, now comes from law. The stability in marriage that was seen as a consequence of authentic partnership now is a legal prerequisite for marrying.

Of interest is Matthew’s version of the passage. Matthew is using Mark’s Gospel as his primary source, but adapting it for different needs and a different audience. Matthew is writing for Christians who come from Jewish background. For them, the rule on divorce is the same as with other Jews. Matthew’s situation is closer to that of Jesus, and he has no need for mentioning wives divorcing. So Matthew simply eliminates Mark’s verse about that.

Matthew actually takes the topic up twice. In the Sermon on the Mount, he mentions it in connection with the reinterpretation of the commandment against adultery (Matt 5:31-32). This brief mention again presumes the husband would be getting the divorce. The longer passage in Matthew (19:1-12) is a version of Mark’s account today. As mentioned, Matthew omits the verse about wives getting divorces.

However, since Mark is his source, Matthew continues Mark’s legal view of the matter. It would seem that this causes some hesitation on his part, for he adds a parenthetical exception: “unless the marriage is unlawful” (Matt 19:9). This passage is a source of great debate, for it is not clear what Matthew had in mind. However, it might be related to the disciples’ response, also only in Matthew: “If that is the case of a man with his wife, it is better not to marry.”

For reflection: How would you state the wisdom of Jesus’ teaching?

The gifts of the Magi