Hear these statutes and decrees

Who does justice will live

Be doers of the word

From their hearts comes the evil 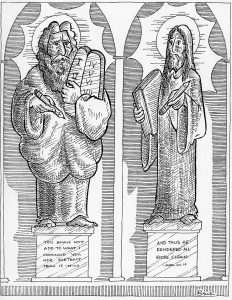 The role of the book of Deuteronomy in the history of the Old Testament has come to be understood anew in recent studies. In his book, “The Pentateuch,” John McDermott notes that Deuteronomy came together in its initial form during the Assyrian crisis in the northern kingdom of Israel, 200 years after Solomon. It deliberately models the alliance with Yahweh on those of the Assyrian treaties of that time. Their allegiance to God overrules that of foreign empires. After the destruction of Samaria in 721 B.C., it was brought south. A century later, when it was found in the Temple, it became the standard for the other traditions in the Pentateuch.

The passage for today introduces the terms of the covenant. The statutes are said to be unrivaled — that is, by foreign treaties. Its insistence can be explained by the competing demands of the Assyrians.

Later in the chapter, this intransigence is explained by the term “jealous God.” This is a result of traditional translations. The New American Bible has a useful footnote on that. It says, “In modern usage, however, ‘jealous’ denotes unreasonable, petty possessiveness, a meaning, even as nuance, wanting in the Hebrew.” There it is better expressed as “solicitude for someone or something,” perhaps like a mother fiercely guarding her child.

Today too we begin the letter from James. Here too the primary emphasis is on justice and humane treatment of the poor. Among New Testament writings, it is nearly unique in its focus on these themes. While traditionally attributed to James, “the brother of the Lord” in Acts 15, more recent assessments, based on its excellent Greek style and its concentration of themes that appeared after Paul’s time, think a later writer borrowed James’ name for the work. Attributing a work to a person famous for its particular kind of writing is a practice seen throughout the Bible, from Moses to David to St. Paul.

Today we are just getting started. But already we have one of the more famous lines from this letter: “Be doers of the word and not hearers only, deluding yourselves.”

In the Gospel reading we return to Mark’s Gospel, after a five-week detour to John’s Bread of Life Discourse. We check back in at Mark 7, where Jesus is shown disputing with the Pharisees. The issue that occasions the exchange is the failure of Jesus’ disciples to follow the practice of washings, as favored by strict interpreters like the Pharisees, but not so much by ordinary villagers, such as fishermen and farmers. Jesus takes advantage of the occasion to turn the tables on the critics and question the practices themselves.

The selection for today skips part of the passage. (In part, this allows us to avoid speaking of “latrines” in church — see Mark 7:19.) In the fuller text, their practice of qorban (here Mark adds: “meaning, dedicated to God”) is criticized for how they make use of it. He calls them hypocrites, because they ignore the larger picture as dictated in the law, while concentrating on the minor parts. He notes how this conveniently allows them to appear virtuous, even while they disregard the major demands of the law and covenant with God.

In the next part omitted in today’s selection, we discover that when they returned to the house the disciples sought an explanation. And here Mark takes advantage of the interaction to say, “Thus he declared all foods clean” (7:19). The final part of the passage, included in our selection, ex-plains the reasoning. It is not what goes into a person (e.g. “unclean” food) that is a cause for concern. Rather, it is what comes out of a person, in the way of evil thoughts, unchastity, theft, murder and a list of other bad actions.

For reflection: Has it even happened that we use religious acts to cover for bad intentions?

Angels and the city

The gifts of the Magi