THE OCTAVE DAY OF CHRISTMAS – SOLEMNITY OF THE BLESSED VIRGIN MARY, THE MOTHER OF GOD

The blessing of Aaron

May God bless us

The shepherds visit the stable 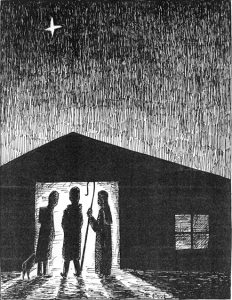 The year begins with the blessing of Aaron. The book of Numbers takes us from Mt. Sinai to the borders of the Promised Land, covering a period of some 40 years. It begins with a census and instructions, delivered at Mt. Sinai (Num 1:1—10:10). From there to 25:18 we have the story of the Israelite rebellion and desert wanderings. In 25:19—36:13 we conclude the book, after another census of a new generation. It takes place at the eastern border of Canaan, where Moses dies before the Israelites enter the land promised them.

How does the blessing of Aaron fit into this? It is a part of the set of instructions given before the departure from Sinai. Looking over these chapters, you can see that it is part of the lists and instructions pertaining to the Aaronite tribes. This is prayer is given them to be their standard blessing. Presumably at the time this was written, many years after the event, it was part of the priests’ liturgy at the temple if Jerusalem. It serves us, in turn, as the blessing on the new year.

The passage from Galatians is located at the very heart of the letter. It follows from 4:1-3, and with those verses fits closely with the previous part, Galatians 3:23-29. Paul speaks of three moments. If Aristotle is to be blieved that a narrative has a beginning, a middle, and an end, this is a narrative. I like to think that the three moments here can be titled “we were,” “but now,” and “so then.”

We were slaves and estranged from God.

But now the Christ has come, faith has come.

So then we have become adopted children of God and can call God “Abba, Father!”

Even more impressive, Paul uses it to structure the doctrinal part of his letter to the Romans—1:17—3:20; 3:21—5:21; 6:1—8:39. This gives the theological meaning to the season we are celebrating. The Gospel story provides the human element. But of course, here too we have more than meets the eye.

The Gospel of Luke has contributed the story of the shepherds coming to the stable, following upon their visit by the angels. The shepherds represent some different aspects of the Christmas story. On the one hand, they evoke the original shepherd of Bethlehem, David before he became king (1 Samuel 16). “Shepherd” was a time-honored title for the ancient kings. On the other hand, in the story they represent the marginal members of society. This is the point of the angels announcing a new day to the shepherds, rather than the royal court.

The story of their visit to the stable brings both of these meanings to the site of the incarnate newborn. As the Magi in Luke’s story, bringing the homage of the world to the site of Christmas, so with Matthew: the heritage of David kingship is giving homage and handing over the future to the new king. Meanwhile, the lowly of the world are present to welcome this king to the new world. For it will be a new world for them.

For reflection: What would you point to as the central meaning of Christmas?

Here I am, I come to do your will

Our struggle with riches