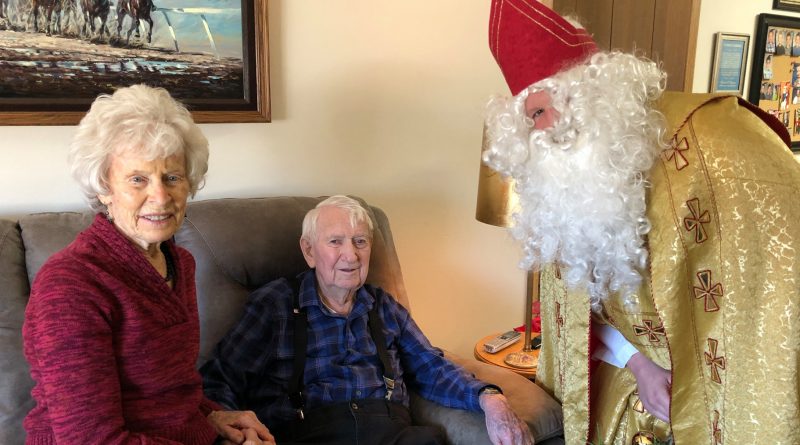 Not too long ago, I received information from a credible source that a man dressed as St. Nicholas was spreading cheer in a small Iowa town. With this courageous display of Christmas spirit as my inspiration, I present the following verbal stocking stuffer to you, dear reader.

Before adopting an alias, putting on a red suit and gaining a few pounds, St. Nicholas was the generous bishop of Myra, a city in what is now the nation of Turkey. By about the middle of the fourth century, old St. Nick had already spent time in prison for his faith amidst the Christian persecution of the Roman Emperor Diocletian.

He had also attended the groundbreaking first Council of Nicaea in the year 325, during which the Nicene Creed that Catholics say at Mass every Sunday was agreed upon. Although Nicholas was known as a pretty happy fellow, he was rumored to have punched a man named Arius in the face during a heated debate over church doctrine. Ultimately, Nicholas won the argument over whether Jesus is a co-equal member of the Trinity. (The council said he is.)

The bishop garnered a reputation for gift giving that flowed from his concern for the poor. One ancient tale tells how St. Nicholas helped three sisters. Their father didn’t have enough cash for their dowries, so they couldn’t get married and were in danger of being sold into slavery. St. Nicholas allegedly went to their home in secret on three different nights. Legend has it, he threw bags of gold coins through a window each time, which made it possible for the women to wed. After St. Nicholas died, his fame spread worldwide, with many miracles being attributed to his intercession.

During a strange caper in the year 1087 that is reminiscent of “The Grinch that Stole Christmas,” Italian sailors stole Nicholas’ bones from a tomb in a church in Myra and took them to Bari, Italy, where they are buried today. The saint reportedly

said: “The giver of every good and perfect gift has called upon us to mimic His giving, by grace, through faith, and this is not of ourselves.” Over time, St. Nick’s life inspired

Santa Claus as we know him today. Almost as common as singing songs about Santa Claus on Christmas is the practice of putting stars on tops of trees.

This tradition has its basis in Scripture. According to the Gospel of Matthew Chapter 2: “When Jesus was born in Bethlehem of Judea, in the days of King Herod, behold, magi from the east arrived in Jerusalem, saying, ‘Where is the newborn king of the Jews? We saw his star at its rising and have come to do him homage.’” A footnote found in a widely used version of the Bible explains that “it was a common ancient belief that a new star appeared at the time of a ruler’s birth.”

So was there an actual star in the sky the night Jesus was born and did it lead the wisemen to him? There’s been a lot of debate about this through the centuries. Some have said the light was given off by a meteor, a comet or an extraordinarily bright star called a “nova”— others believe it was a miracle that wasn’t bound by the laws of physics. Astronomer Michael Molnar, formerly of Rutgers University, has gotten a lot of attention in recent years for his theory that the star was the planet Jupiter. Whatever it was, the mysterious light announced the coming of “the Light of the World,” as Jesus calls himself in John’s Gospel. Now, you’ve got some things to think about while sipping eggnog with Rudolph. As they say in Bari, Buon Natale!

Photo: On Dec. 6, ‘St. Nicholas’ arrived in Edgewood on his feast day and spread joy throughout town. He shared his wealth by giving chocolate gold coins to the residents of Lincolnwood and the Edgewood Convalescent Home. He then took a stroll through town and continued to share his gold coins with people throughout the community. When he ran out of gold coins, he shared hugs. (Contributed photo)

The martyrdom of inadequate self-expression