The mission of the prophet

To you I lift up my eyes

A thorn in the flesh 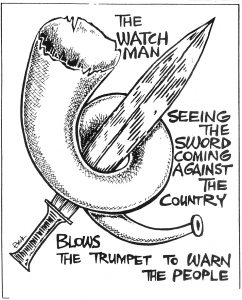 Taking its cue from the Gospel story of Jesus’ rejection in his hometown of Nazareth, the readings today speak to the experience of declaring the truth, when no one is listening.

It is common among the prophets to be warned about rejection at their very calling. We see this with Isaiah (6:9-10) and Jeremiah (1:4-8). And so it is today with Ezekiel. The prophet is assured, however, that whether or not they listen, it is important to put the truth on record. He needs to speak, regardless of the reception. The point is elaborated shortly after this, in 3:17-21, with the example of the watchman in the watchtower. The implication is the prophet is one who warns of the coming catastrophe. You, Ezekiel, are responsible for speaking, but they are responsible for listening. You do what you must do.

This message is repeated again in Chapter 33 of the book, where again the image of the watchman returns.

Paul mentions a thorn in the flesh that was given him. While traditionally this has been considered a physical ailment of some kind, recent commentators suspect it refers to someone that Paul shares his mission with. In other words, a person, not a bodily affliction. In any case, it would fit the theme for the day, insofar as it points to another kind of rejection — but this time of partners, rather than partisans.

The Gospel story of Jesus’ rejection at Nazareth comes at the end of a stretch of narrative that began with his family coming to take him home (Mark 3:20-21, 31-35). Then, it was “come home.” But now it is different: “Do not come home.” During these chapters between the two scenarios of the family, Jesus has been speaking of faith and fear — do not be afraid, but be-lieve. At Nazareth, for one reason or another, faith fails them. Consequently, he leaves them and moves on. It does not seem coincidental that he then sends out the disciples two-by-two, extending the mission to other localities (6:7-13).

The experience of rejection given in this story not only sets the tone for this Sunday. It also provides a basic theme for the Gospels, with their story of the crucified Messiah. Matthew repeats Mark’s story almost exactly. Luke, however, uses the story to set up his Gospel, as Jesus preaches in the synagogue at Nazareth and is rejected (Luke 4:16-30). Even John’s Gospel, which shows very little verbal similarity to the other three, does in fact have a number of lines that echo this story — though they are scattered around (John 4:44; 6:42; 7:3-5, 15). Here too, I think, the story represents the larger theme of the Messiah’s rejection.

To change the tone a bit, I thought I might end with another version of the story of Jesus rejected at home, this one from a musical I put together some time ago. This song is called “Nazareth.” And these are the words:

Went down into Nazareth,

went into the synagogue;

found his hometown people no longer love him.

Some trouble with the family,

neighbors were not neighborly,

just nonplused at what they might make of him.

We know this man!

Isn’t he Joseph and Mary’s son?

Why does he think he can

when no one else has tried to do

what no one else has ever done?

He scarcely spoke a word before

they closed and double-locked the door,

to make it very clear he was rejected.

Since they threw out the seed he sowed,

he took his movement on the road,

to knock on doors where he was less expected.

The tone is light, perhaps, but the overtones are grim. The Nazareth rejection hints of rejections to come.

For reflection: What might be some reasons Jesus wasn’t taken seriously in Nazareth?

The power of fear