Mathias is elected to replace Judas

The Lord has set his throne in heaven

We must love one another

That they may be one as we are one 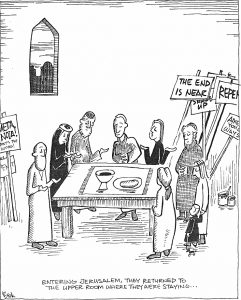 In this archdiocese, as in many places, we exercise the option to celebrate the Ascension on the seventh Sunday of Easter. The readings for Ascension are well known. But what are we leaving behind when we replace the liturgical selections from the seventh Sunday? This week, I thought it might be interesting to see.

The reading from Acts returns us to the first chapter of the book. We hear about the apostles replacing Judas. The liturgy skips over the rather gruesome account of Judas’ death, perhaps for reasons of delicacy in the Sunday worship setting. This account (Acts 1:18) differs from that of Matthew (27:5).

With the election of Mathias, the number of apostles once more returns to 12. This practice was not continued beyond Mathias, perhaps because the description of an apostle is one “who accompanied us the whole time the Lord Jesus came and went among us” to “become with us a witness to his resurrection” (Acts 1:21-22). Only members of the first generation need apply.

The Gospel reading is from the concluding chapter of Jesus’ lengthy Last Supper discourse in John’s account (John 14-17). Jesus has been speaking to the apostles. But now he raises his eyes to heaven and prays. This prayer for protection and unity of the disciples was chosen by Pope John XXIII as the official prayer for the Second Vatican Council — “that they may be one, as we are one.”

The prayer begins with Jesus putting on record that he has completed the task given him by his Father, and now the time has come for him to bring matters to a conclusion. His term of this is “glorify” — “I glorified you on earth by accomplishing the work that you gave me to do. Now glorify me, Father, with you, … ” (17:4-5). After this, he turns his attention to his disciples, praying that they be protected (17:6-19). He ends by extending his prayer to include all those who follow — “those who will believe in me through their word” (17:20). We recall that this Gospel concludes its Easter chapter with a mention of those who, unlike Thomas, have not seen, but yet believed (20:29).

This prayer serves as the final word of Jesus before the passion account in John. In that, it is somewhat parallel to the garden prayer of Jesus in the other Gospels (for instance, Mark 14:32-41). John does not include the garden temptation of -Jesus. The burden of the garden prayer is Jesus’ saying “yes” to the difficult demand made of him by God. Earlier, in the passage about the grain of wheat, Jesus makes this affirmation (John 12:27-28). When Chapter 17 concludes, we turn to the garden, just in time for Judas and the guards to arrive for the arrest of Jesus.

Scholars of John’s Gospel have noticed echoes of the Lord’s Prayer in John 17. There is an initial concern about glorifying the name of God (“hallowed be thy name”). And then it turns toward care for the disciples, with further similarities. In today’s selection, we hear “I do not ask that you take them out of the world but that you keep them from the evil one” (v. 15). There are other echoes as well.

In Mark 14, Jesus’ prayer of acceptance in the garden also has echoes of the Lord’s Prayer — Abba Father, not my will but your will be done. Here, instead of daily bread, we hear of the cup, which Jesus dreads, but accepts. And he shows concern for his followers. “Watch and pray that you may not undergo the test.”

For reflection: Has Jesus given us, in the Lord’s Prayer, a version of his own?

I am meek and humble of heart

Jesus ascends before his disciples