Up to the house of the Lord

As in the days of Noah 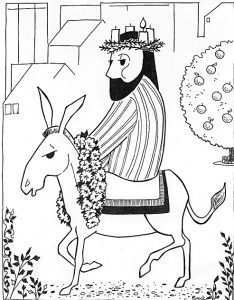 Today we turn the page to a new year in the lectionary. In fact, we turn back to the first page and begin the three-year cycle over again.

First in the book is a poem from Isaiah—a hymn most likely. It is famous as an inspirational text appearing on a public memorial across the street from the United Nations building in New York. In a similar manner, for us it stands at the head of the church year.

It has been called God’s dream for us. The Bible’s call for justice generally tends to yearn toward the future, rather than turn to the past. It favors the New Jerusalem over the lost Eden. This passage fits in that framework.

It is literature, and it might reward a brief look at how it works so successfully. To get technical for a moment, the piece consists of three stanzas, as shown in the Jerusalem Bible. These are equivalent to the three verses, 2-3-4, but with one ex­ception. The first line of v. 3 belongs with the previous stanza, so that the second begins with the quote. Each stanza consists of three parallel couplets.

The first stanza presents two ideas: the mountain of the Lord is God’s house, and the nations one day will come streaming to it. The other two stanzas take each of these ideas and add another to it. To the theme of the mountain is added that of instruction, or Torah. To that of the nations is added that of peace, with no more swords. (There is more, but probably that is enough for most of us.)

So much for form. What about meaning? The hymn plays on the age-old theme of the temple on top of the mountain, closest to heaven. This was the idea behind the stepped pyramid temples in Mesopotamia with their high temples. Isaiah applies the idea to Mount Zion, the temple mount in Jerusalem. The hymn makes the point that when the due time arrives, all nations will turn to the true God, streaming to the holy mountain. There they will receive “instruction.” Zion will resemble the reception of the Torah on Mount Sinai in Exodus, but on a wider scale.

As a hymn, it probably preceded Isaiah, who adapted it for his own purposes. The reason for that opinion is the fact that it appears in almost identical form in Micah 4:1-3. Micah was a contemporary of Isaiah. Probably they both were familiar with a liturgical hymn that they admired and worked it into their own writing.

If this is the case, then Isaiah 2:5, the end of today’s reading, can be read as the prophet’s own footnote, as it were, to the hymn. In a kind of an exasperated sigh, he suggests that if someday entire nations will be turning to God, why shouldn’t Israel do so now? After all, they are on site, and wouldn’t have to wait. But, no…

The passage is famous, of course, for its line about turning swords into plowshares. This has become something of a mantra for world peace, and no doubt is a main reason it appears in front of the UN building.

And it is also enshrined in the famous American folk song. We all remember—

“Gonna lay down my sword and shield

Down by the riverside

For reflection: Any thoughts on why this passage should begin the lectionary?

Note: As in past years, a book of my homilies given at the Franciscan motherhouse is available to interested persons—Cycle A of three years ago. $13.00 covers most of the cost of reproduction, with an additional $3.00 for postage. Also available for pick-up at Smyth Hall at Loras College. Contact Carol Oberfoell, 563-588-7662, or Carol.Oberfoell@loras.edu.

All your works give you thanks

Upright is the word of the Lord