At the Procession with Palms

Third Song of the Servant

Why have you abandoned me?

He emptied himself unto death 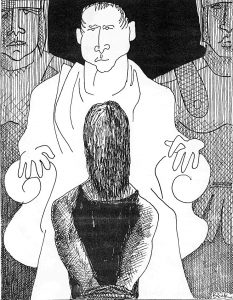 We come to Palm Sunday, and with it to the Passion Account of Matthew. There are so many things to remark upon, but here we will restrict ourselves to a few things that are unique to the Passion as Matthew tells it.

We are all familiar with the Sword Saying in this Gospel. At the arrest of Jesus, which is elaborated by Matthew, we hear Jesus tells the person who draws a sword to defend him, “all who take the sword will perish by the sword” (Matt 26:52). In itself, it makes the point that those who employ violence tend to invite violence. It is similar to the kind of thing we associate with karma—the deed itself will come around and afflict us. Matthew has given us a set of sayings that invoke “your heavenly Father,” such as 5:48: “So be perfect, just as your heavenly Father is perfect” (Matt 5:48). But the karma-like Sword Saying doesn’t mention the heavenly Father. The act itself contains the seeds of its consequences.

Furthermore, by itself the Sword Saying simply states a common pattern of events. It takes on the meaning of non-retaliation by its context. It is because Jesus says to the sword-bearer, “Put away your sword” and follows it with “all who take the sword will perish by the sword” that the Sword Saying comes to express a nonviolent principle.

This comes into play later on, after Jesus is arrested, and the plot against him thickens. Matthew’s version contains a theme not seen elsewhere, that of “innocent blood.” It appears in a couple of scenes in this account. One is the story of Judas’s suicide, which follows upon his attempt to return the 30 pieces of silver (Matt 27:3-10). He is conscious of having “sinned in betraying innocent blood.” Following upon his attempt to remove himself, the priests recognizing the tainted character of the money, refuse to accept it, and purchase the potter’s field.

The other scene, also unique to Mat­thew, is that of Pilate washing his hands of the matter, claiming to be “innocent of this man’s blood” (Matt 27:24). Of course, since his decision is responsible for the crucifixion, this attempt at excusing himself is no more successful than that of Judas. Thus far we see Judas, the priests, and Pilate all refusing to accept responsibility.

This changes when we come to the end of this scene, in a saying that has caused trouble down through the ages of Christian tradition. Following upon Pilate’s ges­ture, the people are shown saying, “His blood be upon us and upon our children” (Matt 27:25). An ironic inversion of this pas­sage has allowed Christians to justify the persecution and even killing of Jews down through history. For Catholics, at least, this hostile view has been explicitly repudiated by Vatican II, in Nostra Aetate, 4.

Matthew is writing in the aftermath of the Great Revolt of 66-70 AD, an uprising which ended in a devastating siege on Jerusalem by the Roman army, and the destruction of its Temple. Many have held that Matthew is saying this was God avenging his Son’s killing.

Which brings us back to the principle of the Sword Saying. Instead of saying, as some do, that God is taking revenge, perhaps it is instead about a failure to accept the message of Jesus. Perhaps the Gospel is saying that those who neglected to adopt his teaching on violence, particularly as framed in the Sword Saying, have invited the damage to come, perhaps especially including the Temple destruction. Vengeance is of the world, rather than of God.

For reflection: What do you see being affirmed in the Passion of Matthew?

A big win for the little guy