Water in the desert

While we were still sinners …

The woman at the well 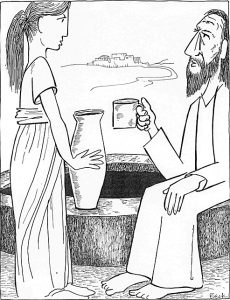 In the Rite of Christian Initiation of Adults, this Sunday and the next two have special meaning. This Sunday features the woman at the well. The following Sundays we will see the man born blind, and the raising of Lazarus, in turn. Each is a dramatic masterpiece.

The story of the Samaritan woman at Jacob’s Well has famously been studied by the late Raymond Brown in his commentary on John’s Gospel. Notably, he shows how the agenda for their conversation is set out by Jesus at the beginning: “If you knew the gift of God and who is saying to you, ‘Give me a drink,’ you would have asked him and he would have given you living water” (4:10). By v. 26, she knows who he is, and by v. 15 she is asking for water to drink.

Brown does not mention that the woman also has an agenda, and it also is honored in the exchanges. “How can you, a Jew, ask me, a Samaritan (and a) woman, for a drink?” In v. 16 Jesus responds to her concerns about men and women in conversation by asking her to get her husband, then. And in v. 21, Jesus addresses the Samaritan question: “Believe me, woman, the hour is coming when you will worship the Father neither on this mountain nor in Jerusalem.”

Sandra Schneiders, another well-known Catholic biblical scholar, has highlighted the allegorical quality of this story, in the way it represents the inclusion of the Samaritan people in the story of Jesus’ coming. Samaria, in the northern part of the land, was the kingdom of Israel, along with Judah in the south. The northern kingdom was destroyed by the imperial campaigns of Assyria, in 721 BC. Judah survived this onslaught, to continue for an­other century and more, before Babylon reduced Jerusalem to rubble.

The last time I was writing about this reading, three years ago, I received a follow-up email from a reader, Tom Schoellen, who pointed out aspects of the allegory. When Jesus speaks of the woman’s five husbands, this refers to the five nations (along with the gods) that Assyria resettled in the land they had conquered.

We should remember that Hosea, a northern prophet who addressed specifically this particular issue, compared the covenant between God Yahweh and Israel to a marriage (his own!), a marriage that Israel violated in his view. As Tom notes, we find the five peoples with their gods in 2 Kings 17:24: “The king of Assyria brought people from Babylon, Cuthah, Avva, Hamath, and Sepharvaim, and settled them in the cities of Samaria in place of the Israelites.” In the allegory, these are the five “husbands,” which is confirmed by Schneiders.

We might put all of this in a larger context. We recall that the Gospel of John begins with the announcement, “the Word became flesh, and dwelt among us” (Jn 1:14). The verb rendered here as “dwelt” literally says “tented” or “camped.” It evokes Israel’s time in the desert, also evoked by Hosea. At that time, God Yahweh lived in a tent, or “tabernacle.” But now God will be “tabernacled” among us, says John.

It is significant that in this Gospel Jesus initiates his public work with a cleansing of the Temple, or Tabernacle (John 2:3-21). The new tabernacle succeeds the old (which will have been destroyed by the time John writes). After this, Jesus come to Samaria, where in his conversation at the well he notes that the future will occur “neither on this mountain nor in Jerusalem.”

Later, John tells of an extended debate in the Temple of the Feast of (what else?) Tabernacles. Next week’s story takes place at that time.

For reflection: What speaks to you in the story of the woman at the well?