THE SOLEMNITY OF THE MOST HOLY TRINITY

How wonderful your name!

We have peace with God through Christ

The Spirit of Truth

As “Immanent,” the Trinity is considered in terms of its inner life, the relationship among the Persons. This is what pre­occupied the Trinitarian Councils of Nicaea (325) and Constantinople (381). Those were times of difficult discernment, and no doubt discourage many today from talking about the mystery for fear of getting it wrong. Accusations of heresy lurk in the background. But let’s forge ahead. 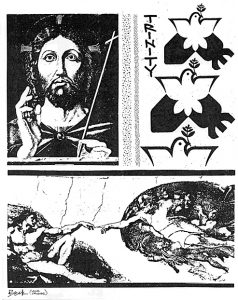 The “Economic” Trinity looks at the Persons in their relationship to us. This is the way the New Testament typically presents it. Simply put, the three persons relate to us (1) as Creator and ground of being, (2) as entering history and bringing salvation, and (3) as dwelling in the church as the on­going life of the community. Thus, our world is first created, then recreated after being disrupted, and finally, it is sustained in love. Accordingly, in some years this feast is celebrated with biblical texts that show God as creator, Jesus as savior, and the Spirit as community life.

The Trinity in this sense allows for the many ways that God enters our lives in our roles as individuals and as social beings. Very likely it is this kind of realization that produced the multiple gods of paganism, with the desire to have divine influence touching the many aspects of their lives.

That being said, we might note that this year the biblical texts depart from this program. The message is not so much about creation, salvation, and community as they are about how the Persons relate to each other. In other words, we have selections that give the biblical evidence that point more to the Immanent Trinity than the Economic.

The passage from Wisdom evokes the Old Testament theme of Sophia—the feminine image of Wisdom that is said to guide God in creation. Wisdom is said to have existed before creation, and to have provided the plan for it. It is recognized that later the image of Logos, the “Word,” as in the opening of John’s Gospel, builds on this Wisdom tradition. It was the Jewish philosopher, Philo of Alexandria, who first depicted Sophia as Logos, ready for John to pick up on it. Much of John’s Gospel develops the way in which the Son relates to the Father. One example: “For just as the Father has life in himself, so also he gave to his Son the possession of life in himself’” (Jn 5:26).

The other reading for today, from Romans, brings all of these together in one passage. Now we return again to the “Economic” vision of the Trinity. Paul begins the passage by taking for granted our rupture from God through sin. But “peace” with God arrives through the intervention of Jesus. As a result, God’s love fills our hearts, by way of the Holy Spirit.

For reflection: How have you always thought of the Trinity?

The nun who kissed Elvis, ditched Hollywood and found her home