Abraham argues on behalf of Sodom

When I called for help, you answered

In baptism, you were buried and raised with him 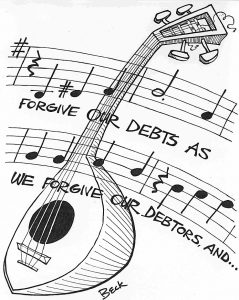 Persistence in prayer is the theme. Persistence in petitioning. This example is for those not in a position to command results. We often see it with certain depictions of persistent women in the Gospel (Luke 13:1-13; 18:1-8). Their only leverage was persistence.

Today, the theme is introduced by the disciples — “Lord, teach us to pray just as John taught his disciples.” Jesus responds with what we know as “The Lord’s Prayer,” or “The Our Father.” The version given us by Luke is more succinct as that in Matthew’s Gospel (Matt 6:9-13). Which is interesting, since already in Matthew it proceeds from Jesus’ opinion that they should not multiply words, as the pagans do. But Luke’s account is even shorter, with only five petitions, to Matthew’s seven.

But Luke is more interested in persistence in prayer. And so he follows the Lord’s Prayer with sayings and examples. First, there is the instance of a neighbor showing up at the door in the middle of the night wanting to borrow three loaves of bread, because he himself has an unexpected visitor. He will get up and answer the man’s needs if he realizes that he will not get any rest until the visitor is satisfied. Persistence pays.

The example is followed by pithy sayings. “Ask and you will receive; seek and you will find; knock and the door will be opened to you.” For everyone who does so will be satisfied. And another example follows. What father would disappoint his child when asked for something to eat, and substitute a snake for a fish, or a scorpion for an egg? The imagery is more vivid than realistic, for Jesus wants this to be memorable. And it is.

And then the lesson to round it off: If you, who are human, fallible and compromised, do the good thing, how much more will your “Father in heaven” do so. And with this, the vignette returns to the opening advice on praying — to “Our Father.”

But all of this is vividly dramatized by Abraham, petitioning God for the citizens of Sodom. Abraham is properly deferential. He is arguing from a position with little leverage, so he has to be patient and careful.

If persistence in seeking favor from God is the theme, it is not simply recommended. It is carried out. We not only hear that Abraham persisted, we are allowed to experience it. Much of the meaning of the passage is in the very patience required for listening to it to the end. This is what persistence is like.

The bargaining of Abraham reflects the common practice of making deals and purchases in that culture. They enjoyed it; though, we may not share that joy, with our preference for fast food and quick results. As we are led through the process, we are repeatedly surprised that it still keeps going. Abraham always seems able to find a way to push it one step further. While we wish he would just get it over and we could move on.

The setting is instructive. The sin of Sodom and Gomorrah was not simply the character of the sin, it was the fact that they were violating hospitality. For they assaulted both men and women who were visiting. Their mockery of welcoming the stranger is in contrast with Abraham, whose elaborate hospitality to the three visitors has just been told before today’s passage. When the strangers leave, one stays behind, and it turns out to be the Lord, the God of Israel. And the bargaining ensues. Abraham is pleading on behalf of the people of Sodom, for they can’t all be bad. Can they?

For reflection: Though 10 good men could not be found, Abraham’s effort is still honored.

Third Song of the Suffering Servant

The flavor of God’s energy