Seven brothers and their mother

Hide me in the shadow of your wings

May the Lord direct your hearts 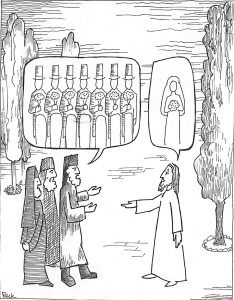 Maccabees and Sadducees. Today’s readings from the Old Testament and the Gospel of Luke feature strange names and arcane movements. And the two passages have similar structures, each featuring seven key characters. Furthermore, both concern faith in the resurrection from the dead. All these aspects serve to pair the two readings.

The lectionary gives only a selection from the story of the seven brothers. Whenever seven instances appear in a story, we can be sure that a leisurely folk tradition has entered the picture. We are not so patient, so the lectionary gives only a selection featuring the seventh brother. The folklore character of the story can be seen in the way the martyrdom of the seven brothers is directed on site by the emperor himself, rather than a subordinate.

Furthermore, each brother gives a speech before dying, and the speeches form a loose progression. The Jerusalem Bible Commentary notes these: The just die rather than sin (7:2); God will vindicate them (7:6); God will raise them up (7:9); they will rise with bodies fully restored (7:11); but for the wicked there will be no resurrection to life (7:14); instead, God will punish them (7:17); the just suffer for their sins, as well as do the wicked (7:18-19); the death of the saints has expiatory value (7:37-38). In this way, the brothers present a theology of martyrdom and an interpretation of resurrection.

In the Gospel, the Sadducees present an argument against the theology of resurrection, with a story of a widow who outlived seven husbands. The law of Levirate marriage (Deut 25:5-10) said a widow should carry on the family lineage by having a son by her dead husband’s brother. The son would then be counted as son of the dead man. The Sadducees, who did not believe in resurrection, are proposing their own belief as a satire on resurrection. But Jesus will have none of it.

The two stories are linked by more than formal features. Belief in resurrection is the thread that underlies both. That belief took hold during the time of the Maccabees. Around 160 B.C., Antioches IV Epiphanes, the Hellenist emperor of Syria, which claimed Judea as a colony, decided to become more aggressive in his promotion of Greek religion. Making it a shrine to Zeus threatened the purity of the temple of Jerusalem. The revolt by Judas Maccabee (“the Hammer”), his father and four brothers succeeded in achieving freedom from the foreign power. The feast of Hanukkah celebrates the following rededication of the Jerusalem temple.

It was during this time that belief in an afterlife emerged more clearly among the Hasidim party (the Pure). It was seen as a resurrection of the body, rather than release of an immortal soul. It was prompted by the feeling that a just God would honor those who died in his name. The resurrection met that need.

The successors of the Hasidim were the Pharisees. They carried on the tradition of belief in resurrection life. The more conservative party, however, was that of the Sadducees, made up of the wealthier high priests and landowners. For them, resurrection was a new-fangled doctrine not mentioned in the first five books of Moses, the Torah, which they viewed as the only true Scripture.

Their differences underlie the Gospel story. In presenting a ludicrous proposal, they are mocking the Pharisees. But Jesus agrees with the Pharisees, at least concerning resurrection. His argument is rabbinic in nature, playing upon the grammar of the verse from Exodus 3: God is still the God of the patriarchs. For they live on.

For reflection: The biblical argument for resurrection is that a just God will honor those martyred in his name.

Striving for heaven: benefits and responsibilities of being Catholic