Rejoice in the Lord always

He preached good news to the people 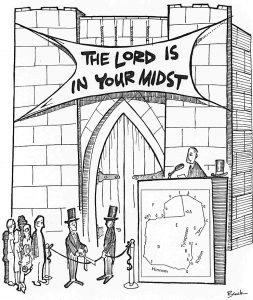 This is Gaudete Sunday, named by way of the second reading. The passage from Philippians, however, attached itself to the celebration because it provided an appropriate verse for the Introit, the traditional entrance antiphon for this Sunday. This is a part of the enduring poetry of Advent, and one among many of the familiar passages that we associate with the season. Many of us recognize biblical passages primarily by their use in the liturgy. This is the case, for example, with the passages in Isaiah that mention “Emmanuel.” It just says “Advent” to us.

But behind the liturgical use of these passages there is the backstory. Each has its own identity in the Bible. For example, today we have an unusual situation in that the response psalm is not from the Psalter, the Book of Psalms. Instead, it is from the 12th chapter of Isaiah. In fact, it is nearly the entire chapter, which is the shortest in the book of Isaiah. But in addition, it is very much like the first reading itself, from Zephaniah. In fact, they are almost interchangeable, and one wonders how the lectionary editors decided which was to be the reading and which was to be the response.

They are both psalms, from the point of view of genre. Not all the psalms in the Bible are in the Psalter. In the case of Zephaniah, this is a song of rejoicing that concludes the book. (The prophetic books tend to end on an up note.) But the passage from Isaiah also concludes a section of that book. Chapters 7-12 in Isaiah are from the collection we call the “Emmanuel” prophecies. It is a distinct section of the book. And so we come back to Emmanuel, though that name isn’t specifically mentioned today.

In the original form, “Emmanuel” was Isaiah’s name for the king of Judah — probably Hezekiah. Perhaps it was one of his throne names; it seems that typically there were five formal titles of this kind. Isaiah, upset with Hezekiah’s father, king Ahaz, promises that the father will be replaced by the son (Isaiah 7-8). Once the original occasion was long gone, as was the David kingship itself, these passages were still on the books and were reinterpreted. They were read in terms of a great king who would one day come and restore the lost dynasty of David. He was the “anointed one,” or “Messiah,” that Judah longed to see. The New Testament announces that Jesus of Nazareth is that Messiah — or “Christ,” to translate the Hebrew word into the Greek of the New Testament.

The passage from Zephaniah has its own history. Although some dispute this, it was seen as the passage alluded to in Gabriel’s salute to Mary in the story of the annunciation. His greeting, “Hail, favored one! The Lord is with you,” which comes to our prayer tradition as “Hail, Mary,” evokes Zephaniah 3:14, the first lines of the reading. This is among a few similar prophetic passages with strong messianic overtones. Of course, different traditions for translating the passages make the connection less obvious to us. The implication is that the promise announced by Zephaniah is reaching fulfillment in the angel’s annunciation to Mary.

The passage from Philippians also has its own history. Paul had been in prison, and his friends in Philippi had sent aid and a person named Epaphroditus to assist him. In the conclusion to his letter back to them he rejoices in them and encourages them also to rejoice. It is the characteristic posture of the Christian. There is more, and we haven’t even talked about the Gospel!

For reflection: This is just a beginning, but learning the deep story enriches our liturgical experience of the Bible.

The call of the apostle Peter

The spirit of truth