Who can know God’s counsel?

Teach us wisdom of heart

Jesus has some words of admonition 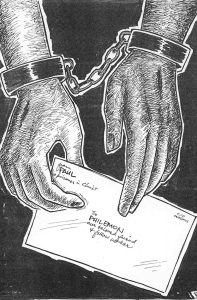 In the Gospel for today Luke mentions two episodes not found elsewhere in the records, neither in the other gospels nor in the histories of Josephus, the Jewish contemporary to the evangelists. However, the story about Pilate fits in well with other accounts showing his fondness for quick and violent solutions to administrative problems. That he would slaughter a group of Galileans who opposed him, even while they were at prayer, would surprise no one.

The two cases given here differ. One involves political power, the other natural causes. It is not clear why the tower in Siloam fell, though some would conjecture unsafe working conditions in a building project. In that case, it would also trace to social conditions in which most people were considered largely expendable, not worth efforts at protection.

Luke’s interest, however, is in the need for repentance. Jesus refuses to view these incidents as instances of divine punishment. Rather, he sees an opportunity to convince people to evaluate their lives. Repentance is a constant theme in Luke’s gospel. He contrasts it to the hubris of self-reliance that takes the form of self-salvation. The Prodigal Son and his brother come to mind (Luke 15:11-32), as well as the Pharisee and the Tax Collector praying in the temple (18:9-14).

The parable of the fig tree is only in Luke. On the other hand, he does not recount the fig tree incident mentioned in the other gospels (Mark 11:12-14, 20-25; Matthew 21:18-22). Today’s lesson clearly concerns God’s forbearance, and the opportunity one is given for repentance — although the hint that the opportunities are limited is also there.

The New Testament reading is from Philemon. The letter is only one chapter long, and this is the only time it finds it way into the lectionary. It would be worth spending the entire column on it. But here are the main points. Paul is in prison, and the slave of Philemon, an important Christian in Colossus (see Col 4:9) escapes to join Paul. The slave, Onesimus (the name means “Useful”), may be seeking refuge. In any case, Paul is returning him to his owner with this letter!

It would seem that Paul is honoring the institution of slavery, but not so. Father James Burtchaell, formerly of Notre Dame, has written a famous reflection on the letter. He notes that Paul has put conditions on the return. He is to treat the runaway, now a Christian, as a brother.  It was customary to treat runaway slaves harshly if they were re-captured. Loss of an eye, or a few digits of a finger, would be a vivid illustration to the other slaves that trying to escape was an unwise thing to try. Execution was not unknown. Such harsh measures were required if slavery was to be maintained as a practice.

Paul is giving Philemon a choice — treat Onesimus as a fellow Christian and a brother, or follow the cultural procedure of harsh reprisals. But in the latter case, Philemon can no longer count himself a Christian. Besides, Paul planned to visit later, once out of prison, and it would not do for him to see Philemon at the liturgy with only one eye. Paul gives Philemon a choice — but he forces him to make that choice.

It appears then that though Paul does not confront the injustice of slavery directly, he still opposes it deeply. His makes it unthinkable. In effect, Philemon cannot be both a slave owner and a Christian. Typically Paul does not confront social structures directly. Instead he preaches a Christianity that rejects unjust practices. His is a radical Christianity that recognizes the basic humanity of all persons.

For reflection: Galatians 3:28, says neither Jew nor Greek, slave nor free, male nor female.

Faith the size of a mustard seed

Pope calls on us to ‘welcome, protect, promote and integrate’ those on society’s margins

Applying theological and cardinal virtues to the abortion issue