The cry of the poor

The rock of refuge

A model for believers 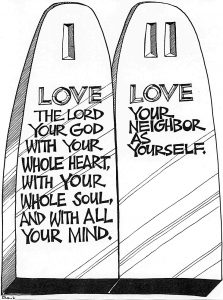 It is commonly held that Jesus was the first to combine the two Old Testament passages quoted in the Gospel—Deuteronomy 6:4-5 and Leviticus 19:18. The first is the “Shema,” the daily prayer of the pious Jew. The second is part of a version of the commandments, with this command to love one’s neighbor position­ed explicitly against taking revenge. Together, they suggest that love of God expresses itself in love of neighbor.

Luke’s Gospel brings out a different aspect. An expert in the law questions Jesus about eternal life (Luke 10:25), and Jesus asks him in turn, “The Law, how do you read it?” The law expert responds with this passage about the great commandment. But then he follows up with the question, “Who is my neighbor?” This is not just an attempt to narrow the demands. It is also a lively legal question current among Jewish factions in the time of Jesus. The Essenes, for instance, excluded everyone who was not part of their community, as not being a “neighbor.” The Pharisees held different positions and argued them vigorously. So the lawyer’s question is raised in that context.

In fact, later in the chapter Leviticus itself adds a clarification, where the stranger in the land is included as a neighbor (Lev 19:33-34). But then it was asked whether this refers to only those who convert to Judaism or to all strangers in the land.

Luke’s account notably answers the question with the parable of the Good Samaritan. But today’s liturgy takes another approach, citing Exodus 22:20-26, a section of the covenant law code. This is one of my favorite passages. It might be called “the cry of the poor.”

A close look at the passage shows that it runs its argument by twice (Ex 22:20-23, 24-26). Each run has three parts: (a) a warning not to molest the vulnerable among you; (b) the assurance that if they cry out to God, he will hear them; and (c) the final declaration in which God enforces his will.

The first part naming the vulnerable includes the resident stranger (22:20), the widow and the orphan (22:21), and the poor person (22:24-25). These have in common a lack of the usual safeguards their society provided. The stranger is missing the family support, the widow and orphan lack the patriarch essential in that patriarchal society, and the poor person lacks the material resources. They are vulnerable members of the society, hence the injunction, “do not molest” them.

This remarkable passage, part of the covenant code of law, sets the terms for the evaluation of God’s people in the Old Testament. The book of Ruth tells the story of two women, Ruth and Naomi, who are widows, poor and “strangers in a strange land.” The prophets also consistently draw on this passage to make their case against social injustice (Isa 1:17, 23; Jer 7:5-6; etc.).

We might also understand this criterion for a just Israel to apply today, as we look to the Scriptures to guide us in creating a just society. We too have our vulnerables—our widow and orphan, poor person and stranger in the land.

For reflection: How would you rework Exodus 22 for today?