The covenant of Noah

Your ways are of old

Jesus in the desert 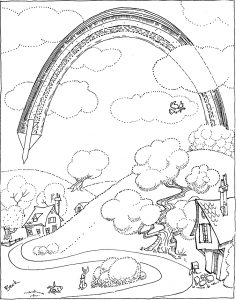 A flood story is part of the collective memory of most ancient peoples in the Near East. In Greek mythology it is given in the story of Deucalion and Pyrrha, which marked the end of the Bronze Age.

The biblical account features Noah’s famous ark. An “ark,” literally, is a container of sacred items. The Ark of the Covenant was something like a cedar chest with handles, in which the sacred artifacts of the Moses covenant were transported during their wanderings in the desert. Similarly, an ark in the synagogue is a container of the sacred scrolls.

In the case of Noah’s ark, the sacred content is that of life itself. I tend to think of certain individuals and associations that have taken it upon themselves to preserve the genetic diversity in farms, reserves and special-purpose parks, acting as sort of an archive, or library for “out-of-print” species. Or, if you will, an ark.

Or one might think of this blue planet we inhabit, floating through the universe carrying its cargo of life. Some call it Spaceship Earth. I think of an ark.

The account ends with a covenant in which God promises that there will never again be a deluge like that which devastated the land in those days. This declaration of peace is sealed with a sign—the rainbow, suggesting God has hung up his war bow, and the turmoil is over. Another sign that has come from the Noah story, of course, is that of the dove, representing peace.

I Peter is among the last of the New Testament books to be written. Composed in elegant Greek, in the name of the apostle, it is addressed to Christians in five territories of Asia Minor, including some where Paul had done missionary work. They are Gentiles experiencing pressure to abandon their faith commitment, and the letter speaks often of persecution. In today’s selection, the topic is the baptism that separates them from the life they once knew.

The letter invokes the example of Noah, dramatizing the change that has taken place in the sacrament. It is more than washing off a stain; it is a new lease on life itself. It is a matter of replacing the old life with a new one.

In the Gospel of Mark, the opening events of the preaching of John the Baptist, the baptism of Jesus, and the sojourn in the desert tempted by Satan, move by quickly, in a few verses. For Mark, this is the beginning of Jesus’ story. He does not include any stories about Jesus as a child. The focus is entirely on the mission that begins in Galilee, and eventually takes him to Jerusalem to mount a protest in the Temple.

That is yet to come. For now, the story begins. At the baptism, a voice from heaven presents a program, a call. Quoting passages from the Old Testament—Psalm 2:7, Isaiah 42—Jesus is named the Messiah. But he is to carry out that role and mission as the servant of Yahweh. It is a daunting request, and we see him move out into the desert to process it and prepare. It has clear risks and dangers, and they will prove real once Jesus arrives at Jerusalem.

As we begin Lent, we also prepare for the road ahead.

For reflection: How might Scripture be your guide this Lenten season?

Our fear of hell

Remembering miscarried and stillborn babies as part of our spiritual community