SECOND SUNDAY OF EASTER (OR SUNDAY OF DIVINE MERCY)

A new birth to a living hope 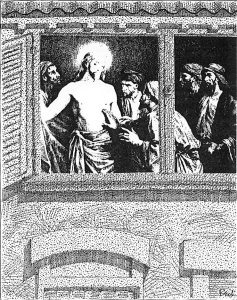 As we move into the Easter season, we leave behind the Old Testament and the letters of Paul. Acts of the Apostles provide the first reading, while (this year) the first letter from Peter provides the second. Throughout the season, we will be taking the Gospel reading from John.

This week the Gospel tells the story of the appearance to Thomas. This is always the Gospel reading this Sunday, no matter the year. The reason, of course, is that this is the only Gospel story in the book that takes place one week after Easter.

Actually, the reading covers both Easter Sunday and the Sunday after. And here we see a characteristic of the Gospel that has been mentioned before. John often sets up two scenes, similarly described, which invite comparison. In this case, we have two scenes taking place after the resurrection, where the disciples are in a room, where the doors are locked. Despite the security, Jesus appears in their midst and greets them with the words, “Peace be with you.” After that, the two scenes differ.

Actually, there is a doubling already in the first scene, taking place on Easter night. Twice, in this case, Jesus offers the greeting, “Peace be with you.” After the first, he shows his hands and side, authenticating the risen life. After the second, he breathes the Holy Spirit upon them, with words about forgiveness. We are led to connect the two—resurrection and the gift of the Spirit.

But a week later we have another visit, focusing on Thomas. Between the two scenes we were told that Thomas was missing. We have already met Thomas, since he spoke up during the Lazarus scene, noting that a return to Jerusalem would mean death (John 11:16). He also speaks up during the supper discourses (14:5). We know that he is blunt and tends to be a realist, in today’s vernacular. And he does not disappoint, as he refuses to ac­cept the word of the disciples.

In this second scene, beginning as be­fore, Jesus moves immediately to Thomas and engages his skepticism. On Easter night, he displayed his hands and sides. But now he invites Thomas to touch and explore them. The clear implication is that this is not a vision but literally a tangible reality. This is truly a resurrection of the body, as the early church expressed its faith. This was not a mirage. It was not a vision that would offer no resistance to touch, like a hologram.

Nor was it a gnostic story. Gnosticism was a distortion of the Gospel story that appeared in the later years of the New Testament. It’s prevailing belief was that spirit is good, but matter is evil. Salvation, for the gnostics, meant that one was delivered from material existence and returned to pure spirit. After effects of gnostic thinking still dog Christian belief.

In recent years, publicity of certain gnostic Gospels, such as the Gospel of Judas, or the Gospel of Mary Magdalene, have received exposure on cable television. What these “gospels” typically show is Jesus having a conversation in his final days, or after the resurrection, with certain believers to whom he delivers an esoteric message. He assures Judas, for instance, that he is to enable Jesus’ deliverance from this flesh.

Not so in John’s Gospel. The Risen Christ is the bodily Jesus. The Word be­came flesh, and the flesh itself is re­deemed, along with the human spirit. Confronted with the risen body, with its wounds—a presence both corporal and injured—Thomas confesses his Lord and his God. Many sides of the one experience converge here. And the skeptic Thomas seals the revelation with a realist’s word of affirmation.

For reflection: Why is the testimony of Thomas valuable?