By the streams of Babylon

Even when we were dead …

Just as Moses lifted the serpent 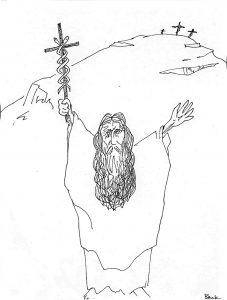 During the Sundays of this Lent we are looking at the Old Testament readings. In the first three weeks we witnessed the covenants of Noah, Abraham and Moses. This week we move beyond those to view Israel in exile, under judgment.

The Babylonian exile was the deepest crisis in Israel’s history. Yet much of the Old Tesatment took shape during this time. However, it is an amazing fact that we have no account of the exile itself. At most, we have reports from the margins, before and after. The return is given told in Ezra 1. The events leading up to the crisis are reported in three accounts—Jeremiah 39-43, 2 Kings 24-25, and 2 Chronicles 36, today’s first reading. Rainer Albertz, in his book, “Israel In Exile,” writes about these three, which are the basis of these sketchy remarks.

Jeremiah was among those who remained behind. With the Jerusalem elites taken away, he was part of an effort to construct a social system that was more equitable to the poor and the peasant landowners. Albertz calls it “The Exile as a Lost Opportunity.” Although he had the cooperation of the Babylonian authorities, that ended when a member of the deposed royal family assassinated Gedaliah, the Israelite appointee that was assigned to govern the colony.

Second Kings 24-25 reports the experience of the elites who were deported. It has become the official version in the Bible. Albertz calls it “The Exile as the (Temporary) End of History.” These chapters of the Bible are part of the historical project that begins in Deuteronomy and concludes here. Its assessment is that Jerusalem was leveled and the Temple destroyed because of the sins of Israel.

Today’s reading from 2 Chronicles 36 parallels that of 2 Kings, but was written after the exiles had returned. It is part of a writing project that continues into Ezra and Nehemiah. The return puts a new cast of the experience of exile. Albertz’ title is “The Exile as a Sabbath for the Land.” It maintains that the 70 years mentioned by Jeremiah represents a sabbath and that the Chronicler sees these as making up the lost sabbaths of the past history. It is both chastisement and promise for a new day. The covenant of Moses had been violated, but God renews his promise.

While there are no historical accounts of the exile experience, there are a few texts from that time. One major example is the writing of Second-Isaiah, prophet of the exile (Isa 40-55). Another example is the response psalm for today, Ps 137. This psalm, familiar to us from many versions, such as “By the Willows There” in “Godspell,” escapes categorization. It is drenched in bitter irony.

It has three parts. In the first part (1-4), the psalmist is asked to sing a song of Zion, that is, Jerusalem. He is appalled, since those asking him have just leveled the place. The memory prevents him from complying. The second part (5-6) consists of a double self-curse, designed to prevent him from singing should the memory fade. His tongue and right hand are to be paralyzed should he forgot the horror, thereby ensuring that he can neither sing nor play his harp. The third part (7-9) is excluded from today’s liturgy. In contrast to the curses in the previous section, this part pretends to be a beatitude—“Blessed are they …” However, these blessings are given to those who destroy Babylon in revenge, and who slaughter their babes, as happened at Jerusalem.

The final irony is that he is singing the very song that he claims to be unable to sing, no doubt because he has no choice. But it is not the song they requested.

For reflection: How does crisis produce a renewed life?