Opening the door of faith to Gentiles

Make known to the children of Adam

The holy city, the New Jerusalem

A new commandment: Love one another

The Acts reading relates the end of the first missionary journey of Paul and Barnabas. It concludes with an affirmation that the door of faith has been opened. This clearly has the shape of a conclusion. After this, the Apostolic Council of Jerusalem will draw together the evidence of Peter (Acts 10), with Paul and Barnabas, and make a decision about the ongoing mission. One thing happening here is organizing the churches that they have started. “They appointed elders for them in each church and, with prayer and fasting, commended them to the Lord in whom they had put their faith.”

The New Jerusalem evoked in the reading from Revelation is an idealized image of the community of Christians. For the writer this was not seen as in the future but rather in present time, and capturing the soul, as it were, of the community. In a time of persecution, this image provided reassurance against the Empire, which presented itself as the overwhelming force in the world. This vision put that in proper context. 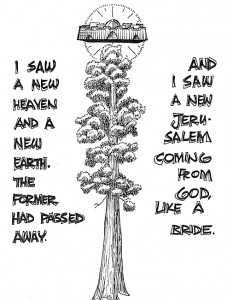 In the Gospel reading, we are just entering into John’s account of the Supper. After this comes four chapters of Jesus’ farewell discourse. For now, the basic theme is announced — the new commandment of love. “My children, I will be with you only a little while longer. I give you a new commandment: love one another. As I have loved you, so you also should love one another.” By this, he adds, “all will know that you are my disciples, if you have love for one another.”

How do these readings fit together? The readings are chosen for their seasonal value more than their appropriateness for any particular week. However, we might see some coordination in the set of texts. My own sense is that we have the different takes on the Christian community. In Acts, we have Paul founding individual communities, with the practical aspects included. With Revelation, we have the essential community beyond all historical particulars, affirmed in the face of persecution. With John we have the fundamental principle of the life of the community, mutual love.

Here I might risk a comparison. As an analogy, no doubt it limps. Nevertheless, there is a similarity between these images of the church, and how we think of the Trinity. For the theologically precise, that would be the economic, not the immanent, view of the Trinity — how the Trinity relates to the people of God, not how the Persons relate among themselves.

In the Trinity, the Father names the depth dimension. This is the Godhead who exists beyond existence, the Creator beyond creation. This is God as the God of the universe, one way in which we experience God. In Revelation, we have a similar way of thinking about the Christian church, as existing in its spiritual reality, its pure spiritual form.

The Son is our experience of God acting in history. This activity is throughout the Bible, but in the Second Person, we find that activity taking on a personal level in Jesus of Nazareth. In Paul’s activity in Acts, we see the historical establishment of specific communities. We see elders being named, a mission being proclaimed in a specific part of the world. We see the church as a historical reality. And for Paul, the church was Christ.

The Spirit is the life of the community, sent to keep and inform the existence after the Death and Resurrection of Jesus. In John, we have something similar, insofar as the basic commandment, Love One Another, lies at the heart and soul of the church’s community life.

In some ways, then, God’s church reflects God’s life.

For reflection: What language would you use to describe the Church?

Parable of the Two Sons