Judgment on the merchants

The Lord lifts up the poor

Pray also for those in authority 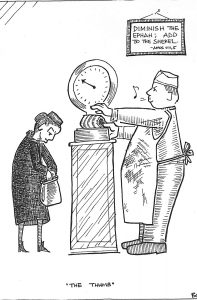 Amos has a reputation of being the prophet of social justice. This is accurate, but it does tend to ignore how the other prophets share the same concerns. Nevertheless it is true that Amos is more blunt in his accusations. Typically, he directs his attention to different groups of the leading classes, charging them with abuse of their position. The political leaders, judges, priests — all get their moment in Amos’ scorching spotlight. In today’s case, it is the merchant class. What he finds disturbing is their exploitation of the poorer members of society.

His first charge is that their piety is false. They apparently only join in the liturgies because it is necessary for business. But they cannot wait until the festival is over so they can get back to making money. He next charges that they are dishonest in their business dealings. They alter the scales; they adjust the amounts. And worst of all, they take advantage of the limited resources of the poor to unload on them the inferior goods they otherwise wouldn’t be able to sell. For them it is a plus-plus. For the poor it is a burden brought on them by their very poverty — a minus-minus. Amos is not happy, and he is convinced that God is not either.

The Gospel parable is among those infamous as “problem parables.” In this case, there are a handful of issues. One is that no one knows where there parable itself ends and the attached sayings begin. They seem to slide into loosely related sentiments.

The other question concerns what seems to be the steward’s immoral behavior. The background is the practice of absentee-landownership common in an­cient Israel. The absentee landlord has put a manager in charge of his property. In assessing the collection of rents, the owner is not satisfied with the job the steward is doing. Critics such as Sharon Ringe point out that most likely no dishonest or illegal behavior is implied in the steward’s “squandering.” Nothing is said about any charges against him, nor requirement to repay the master. More likely the manager is simply not doing his job.

His shrewdness lies in acting quickly, before the word gets out that he has been sacked, and everyone assumes he still has the authority of a manager. In his “generosity” he makes certain that he has secured friends for the future. The owner must go along with the new arrangements, for to cancel them now would create further problems among angry tenants. The owner calls the steward “shrewd” for outsmarting him.

But Luke takes it further. As Ringe points out in her commentary on Luke, “the key is the manager’s identification by the owner as a ‘manager of injustice’ (16:8), and in the subsequent identification of wealth, not as ‘dishonest,’ but as ‘wealth of injustice’ (16:9).” In other words, where our text commonly uses the adjective “dishonest,” she reads it as more properly rendered by the phrase “of injustice.” It makes a difference.

In an economy of scarcity, the excessive accumulation in the hands of one, such as the “rich man” is an injustice that must be redressed by redistribution. The manager is actually doing this, by reducing the amount owed by the poorer tenants. While he does it for personal reasons, the effect is praiseworthy. Ringe: “the manager’s act makes him obedient to Torah despite himself.” And so, what he does out of self-interest, the “children of light” ought to be doing for reasons of simple justice (16:8).

Between Amos and Luke we have both sides of the matter — regard for the poor and advice for management.

For reflection: We like to say that our situation is different, and these words do not apply, at least not directly, to us.

What ‘Jurassic World: Fallen Kingdom’ gets right and wrong

A case for priestly celibacy

Parable of the Wedding Feast