You have heard the words of my mouth

You were buried and raised in baptism 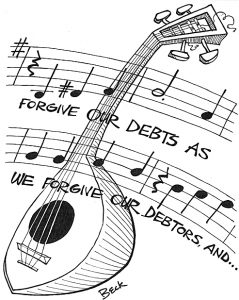 We are on our way to Jerusalem. The conversation shifts back to the disciples. They ask Jesus to teach them to pray, “just as John taught his disciples.” So the theme for the day is prayer. And more: persistence in prayer.

The Gospel passage is set up for us by the Genesis story of Abraham and his three visitors. Actually, we saw the first part of this story last week. The visitors leave and are heading toward Sodom, which is destined to be destroyed by molten fire. But first, Abraham prays for their survival. The story illustrates persistence in prayer. It does so not by informing us that such persistence is beneficial. It actually allows us to experience it second-hand, as we sit through the repeated negotiations of Abraham, as he bargains with God. He tries out patience, as we witness him concerned about trying the patience of God.

In the Gospel, this persistence is indicated in the second part of the reading. The parable of this friend coming to the door at midnight and asking for three loaves of bread concludes with the words: “I tell you, if he does not get up to give the visitor the loaves because of their friendship, he will get up to give him whatever he needs because of his persistence.”

One implication is that the delay that re­quires persistence also serves to sort out the trivial prayer from that truly expressing need.

Following this, the lesson shifts its direction a bit. Rather than talking about persistence, it makes the point that God will listen to prayer. In a way, this is already implied somewhat, since the need for persistence might suggest God is not paying attention. So now we hear, “Ask, and you will receive; seek and you will find; knock and the door will be opened to you.” And then another parable. Drawing on their own experience of parenthood, he indicates that God, who is good, knows that kind of concern, and does it even better.

But what has gone unmentioned so far is the first part of the reading: the Lord’s Prayer. Both Luke and Matthew (but not Mark or John) give us this prayer. However, Matthew’s version is a bit longer, with seven parts. Luke’s version has only five. Our liturgical version follows Matthew.

In a way, the five parts read like a list of prayer topics: “Father, (1) hallowed be your name, (2) your kingdom come. (3) Give us each day our daily bread, (4) and forgive us our sins, for we ourselves forgive everyone in debt to us, (5) and do not subject us to the final test.”

It begins by recognizing God’s transcendent holiness, far beyond created reality. Following this, it calls for the recognition of God’s rule in human society.

The final three petitions look to human needs. First, sustenance: provide us with the bread that we need. The word translated “daily” appears here and in Matthew’s version, but nowhere else in Greek literature. A likely meaning is “necessary.”

Then, he calls for the gift of forgiveness, and with that, of forgiving others. Luke speaks of God forgiving our sins, but our forgiving “debts” to others.

The third is to guard us against the “test,” both that occurred by living as Christians, and the final “test” in the end times. We are reminded of the apostles in the Garden of Gethsemane. In fact, much of the Lord’s Prayer has echoes in Jesus’ garden prayer. Abba Father, your will be done. Jesus speaks of a “cup,” not of “daily bread.” And asks that the disciples be spared of the test.

For reflection: When you say the Lord’s Prayer, how do you understand the different requests?

Flesh for the life of the world

I came to you in weakness

He calls us friend!