Let all the earth cry out with joy

May I never boast but in the cross

Jesus sends 72 out on mission 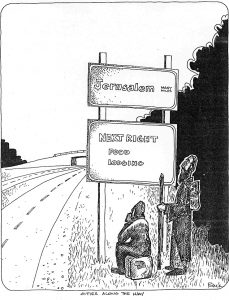 We are back in the ordinary time, when the Old Testament reading is chosen to align in some way with the Gospel reading. Luke has just announced that Jesus and his entourage are heading toward Jerusalem, and now he sends out 72 disciples ahead of him to prepare the way. They are looking ahead. Perhaps that is why the first reading focuses on Jerusalem.

Isaiah 66 is the final chapter of the work. It is when a number of farewell messages are set forth. In this passage, it focuses on the city of Jerusalem, presented as a nurturing mother. While “Mother Jerusalem” is a frequent image in the Old Testament, it seldom gets this specific. The sustained image is that of a mother nursing a child — the same kind of activity, when performed in public places, that has become controversial in our society. There’s no hesitation here, however.

The setting for the passage in Israel’s history is their return from exile. Isaiah 40-55, that part of the book we attribute to the anonymous exilic prophet, “Second-Isaiah,” is devoted to convincing the Israelites to return to the land, now that the exile has been announced as over. But Isaiah 56-66, which we usually call “Third-Isaiah,” consists of prophecies that take place once they have made the return trip. Today’s passage seems to be an idealized image of the security and comforts of arriving home again.

But if the Old Testament reading is about arriving in Jerusalem, the Gospel reading takes place just as the group of Jesus and his disciples set out on their long journey toward the city. That journey will be a lengthy one, filling the 10 chapters to follow in Luke’s Gospel. And so it is probably a good idea to look ahead at the destination, as we begin the long walk to the city.

Along the way we will see Jesus interacting with three groups — his disciples, his opponents (Pharisees and “scholars of the law”), and the growing crowds that join the procession. During the course of the coming months we will experience each of these three dialogues. Notice also, that while each is distinct, the others seem to be listening in, and break into the conversation at times.

Today the interaction is between Jesus and his disciples. The 72, a number which is also rendered “70” in some versions, sends echoes from the Old Testament. Not only Second and Third Isaiah, as we have just seen, but also the story of Eldad and Medad and the 70 elders anointed by Moses (Num 11:16-25). They prophesied and the Spirit rested on them.

But the story also looks ahead, anticipating the other book by Luke, the Acts of the Apostles. There we also find a delegation of disciples, other than the apostles, extend the mission of the church, now to the wider world beyond Jerusalem (see Acts 8:1). Other echoes of this mission in Acts are to be seen in the exchange between Jesus and the 72, when they return.

Themes accompanying the mission are “Spirit” and “Satan,” anticipating Acts’ Spirit-driven narrative. In Acts, the pagan idols of the gentile world are aligned with demonic spirits, as in the oracular ­spirit in Philippi, exorcized by Paul (Acts 16: 16-18). This foray into the larger world depicted in Acts is previewed here, as Jesus and his disciples move into the unrepentant towns and the curious, often enthusiastic, but uncommitted crowds.

Today we say goodbye to the letter to the Galatians, one of the most important and interesting of Paul’s letters. However, this year it was mostly hidden behind the special seasons of the liturgical year. There will be another day.

For reflection: Jerusalem is not only a place, it is a destination.

Sent out by Jesus