The third song of the suffering servant

“My God, my God, why have you abandoned me?” 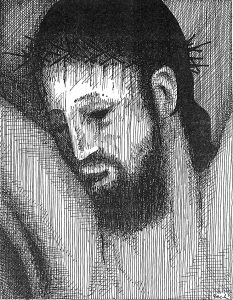 This Sunday, we hear the Passion according to Luke. There are some things only Luke tells about. For in­stance, only Luke tells about the good thief. Only Luke calls the episode in the Garden of Gethsemane the “agony” (22:44). Only Luke speaks of two cups at the supper and two swords for the disciples. Let’s look at some of these.

The two cups stimulate all kinds of anguished exegesis, as commentators try to coordinate this with our liturgical practice of using just one cup. Probably the best explanation that I have heard is that by Sharon Ringe. In her commentary, she notes that the text shows a parallel pattern for each cup. First, the meal is aligned with the first cup, in a parallel passage that has as its refrain, “I will not eat (or drink) it again until the coming of the kingdom of God” (23:15-18). This refers to the last meal they will have with the historical Jesus of Nazareth before he dies. It is a farewell.

The second cup is connected with the bread (23:19-20). This too is in a parallel passage, as both the bread and the cup are given “for you.” This refers to the meals of the community that will be celebrated henceforth “in remembrance of me.” Here is the proper location of the eucharistic celebration.

The two parts reflect the double narrative of Luke, both the Gospel and Acts of the Apostles. One looks back at the Gospel story of Jesus; the other looks forward to the narrative of the early church, in Acts.

In fact, this pattern of facing in two directions, forward and backward, affects the entire Passion account of Luke. This is the double focus of these chapters. In Luke’s account, the supper discourse is also Jesus’ farewell to his disciples. Meanwhile, he commissions them to carry on the task that he has begun. He has served as a servant, and they must do likewise (22:25-27). And he explicitly confers on them the kingdom, as his father conferred it on him (22:28-30).

The two swords are part of looking ahead to the final hours of Jesus’ life. Disciples point out that they have two swords, and Jesus responds, “It is enough” (22:38). Some take this to mean that Jesus endorses violence in certain circumstances. Others suggest it is ironic speech, which doesn’t appear on the radar screen of literalists. The symbolic meaning is already on record in this Gospel, when Simeon tells Mary that a sword of sorrow will pierce her heart (2:35). And in any case, when they come to the moment of Jesus’ arrest by the authorities, he rejects the sword. And in fact he heals the wound. Injuring and healing are flat out opposites, and only the first can be used as a threat.

But there is more to say here, since the little conversation is preceded by Jesus’ remark that what is written about him must be fulfilled, and is being fulfilled: “He was counted among the wicked” (22:37). In fact, this passage is about the suffering servant  (Isa 53:12).

Understood in the New Testament to refer to the crucifixion of Jesus, this is about accepting suffering, rather than inflicting it.

In Luke’s account of the Passion, Jesus’ suffering is emphasized more than others. Mark’s account is equally bleak, but there the emphasis is more on the abandonment and isolation of Jesus. In Luke, it is the suffering and humiliation. In Luke, the mocking of Jesus begins early, the night before. It continues in the episode with Herod, which only Luke records, and reaches a pitch at the crucifixion, to be ended only with the repentance of the good thief.

For reflection: We sometimes find ourselves as characters in the Passion.

The Beatitudes: The Path To Sainthood!

God loves me, as I am