Woe to the complacent leaders

Integrity demanded of a church leader 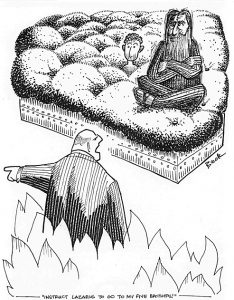 Most of the time we focus on the con­tent of Scripture passages, with little interest in the character of the writing. However, it is literature, and works like literature, and often has the enjoyable qualities of literature, though from a different culture.

This week we return to Amos, and Luke 16, with their concerns about inequality. The first is a fine example of Hebrew poetry. The second shows many of the features of oral literature. Let’s look.

Hebrew poetry is organized by a pattern known as parallelism. How does it work? Well, they say something, and they say it again using different words. It has been described as a rhyme of sense rather than sound. Along with this direct version, called synonymous, two other types are commonly recognized. With antithetic parallelism, they say it twice, but in contrasting ways, presenting two sides to the matter. Thirdly, there is synthetic, which only appears to be parallel. Instead of repeating the sense, it actually continues the thought further. Examples abound in Proverbs and the Psalms. See if you can identify some of them.

All the prophets use this poetic form. Take Amos today. The passage begins with a general “woe” for the governing classes. Without today’s editing, it reads:

“Woe to those who are complacent in Zion,

secure on the mount of Samaria,

Leaders of the first among nations,

to whom the people of Israel turn.”

It is too bad that the fuller version isn’t given, since it identifies the specific group Amos targets. Though I suppose the lectionary wants to involve all of us.

After this we have the eight lines of verses 4-7. These are in four parallel couplets, elaborating on the refined lifestyle of the leadership class. But these couplets are in turn divided into two groups of two couplets each, in the pattern,

“Lying upon beds of ivory …

They eat lambs from the flock …

“Improvising music on the harp…

They drink wine from bowls …

After this eight-line build-up comes the zinger. One line in antithetic contrast: “yet they are not made ill by the collapse of Joseph!” Joseph, you are to understand, is a poetic name for Israel. The point is that the leaders elaborate lifestyle is draining the resources of the people they are supposedly leading. The illness implied is, at the least, nausea. At worst, poisoning.

This much is the charge. Then comes the sentencing:

“Therefore, now they shall be the first to go into exile,

and their wanton revelry shall be done away with.”

As for the story of the Rich Man and the beggar Lazarus, here we see how oral transmission works. In our print-oriented culture we have not retained many oral traditions, though jokes can be considered one such. You can check them against these rules.

The story from Luke shows two of the principles of oral traditions. One of these is the rule that only two people can be in the story at a time. Otherwise it quickly gets confusing. The written page can handle many characters at once, but not oral transmission. Thus, we begin with the Rich Man and Lazarus, but once Abraham comes on the scene, Lazarus no longer has an active part.

The other rule that is illustrated is the use of three-fold repetition. (In more leisurely societies, this is sometimes seven-fold.) We see this today in the three-part dialogue between Abraham and the Rich Man, showing how the latter believes he is still in charge.

The Bible is a library, which happens to have been collected in one volume. There are many writings, and paying attention to them often enriches the message.

For reflection: Where else in today’s read­ings do you find similar features?

Our fear of hell