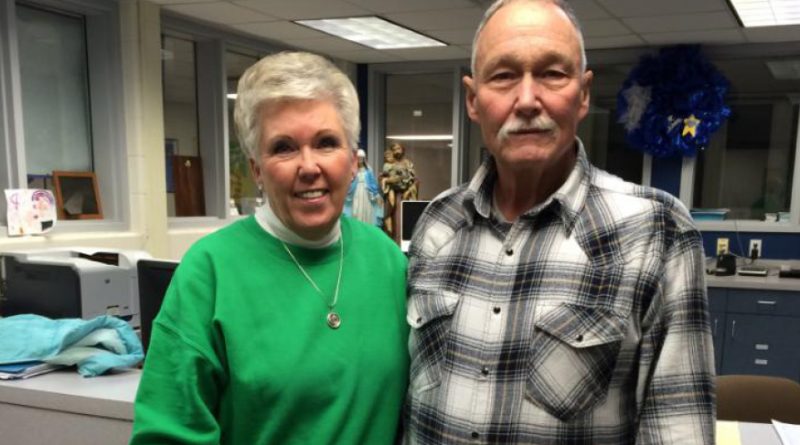 INDEPENDENCE — “It’s been a long journey, but it’s been a wonderful journey,” said Harriett “Sam” O’Loughlin of the path that’s led her to the Catholic Church.

The 64-year-old O’Loughlin will be confirmed and will receive her first Communion as she enters the church at the Easter Vigil on April 15 at St. John the Evangelist Parish in Independence.

O’Loughlin’s long journey to Catholicism began in California — where she was born and raised and grew up in the Baptist faith. It was there, at a USO dance in 1972, that Sam met a young man named John O’Loughlin who was stationed in California while serving in the U.S. Navy. John was from Iowa and was Catholic.

The two had an immediate connection.

“I knew right away he was the man I was going to marry,” remembered Sam.

And marry him she did. The two were wed in a Baptist church in June of 1973. The couple would attend Baptist services together while living in California, and also after they relocated to Texas.

But the two would go to a Catholic church when they were back in Iowa visiting John’s family.

During these visits, Sam developed a strong affection for John’s family and vice versa.

“They were wonderful. So warm and welcoming. They were really accepting of me. They really made me feel like I belonged; they made me feel proud to be a member of the O’Loughlin family,” Sam said.

In 2016, John and Sam — who have one son, Joseph, who still lives in Texas — decided they wanted to move to northeast Iowa to be closer to the rest of the O’Loughlin family.

“The timing seemed right,” said Sam, who is retired from 20 years of employment at Texas Mutual Insurance Com­pany. “We put our house up for sale and buried a St. Joseph statue in our yard.”

The house sold quickly, she said, and in August of last year they moved into their new home in Jesup, Iowa.

Several of John’s family members live in nearby Independence, so he and Sam began going with them to St. John the Evangelist Church — the Catholic parish there. Sam was deeply impressed by the parish’s pastor, Father David Beckman, and said she got a lot out of his homilies each week.

“I loved listening to what he had to say. I loved it there,” she said.

Shortly after they began attending St. John the Evangelist, Sam saw a reference to RCIA in the church bulletin and asked what it meant. She began to consider going through the program.

“After moving back here and finding our house and being around family, I started to get the feeling that God was calling me to come into the church,” reflected Sam.

She began RCIA in October of last year, and John became her sponsor. Her instructor through the process has been Beth Flaucher, the coordinator of adult faith formation and RCIA at the parish.

“Beth is phenomenal,” Sam said. “I’m not shy; I asked a lot of questions. But there were no dumb questions with Beth. You never felt uncomfortable. She usually knew the answers to questions, and if she didn’t, she found out. She wanted to make sure we understood (what the church teaches) and why.”

Sam said she also learned a great deal from a book they used in the class, “In His Light: A Path into Catholic Belief,” by Father William Anderson, as well as from several guest speakers who presented on different topics pertaining to the faith during class time.

“Everyone should go through this class — even cradle Catholics,” Sam said of the RCIA program. “Learning about church history is amazing. I love all the detail, all the symbolism in the church. A lot of stuff, the ceremonies and things, I didn’t understand. But once it was all explained, it made sense to me. It was beautiful.”

While going through the RCIA program, Sam and John had their marriage blessed in the Catholic Church.

Sam also experienced the sacrament of reconciliation for the first time; she went to confession on the morning of Palm Sunday.

Initially a bit uncomfortable with the idea of confessing her sins to a priest, Sam said the experience turned out to be a positive one.

“I was used to the idea of talking to God directly to say I was sorry,” she said. “But after confession your sin really does feel like it’s gone, like you’re not carrying it around with you anymore. I got a lot more out of it than I thought I would. It was pretty cool.”

When Sam joins the church at the vigil Mass her husband’s family will be there with her.

“They are such a supportive unit. They’ve been fantastic to me,” Sam said. Twenty-four people will be there to support me that night.”

Sam said she has also received an overwhelming amount of support from the members of St. John the Evangelist Parish. She said parishioners have been welcoming to her in so many small ways, such as the women who invited her to crochet prayer shawls with them. Or the people who — in kindness— gently touch her shoulder as they walk past her on their way to Communion each week.

“The congregation has been wonderful. I’m looking forward to being in this church and supporting this church,” Sam said.

“But I don’t feel new here,” she added. “I feel like I’ve been here forever.” 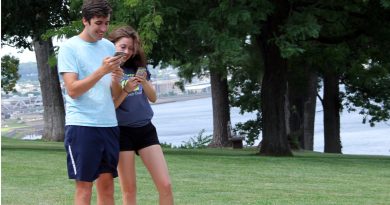 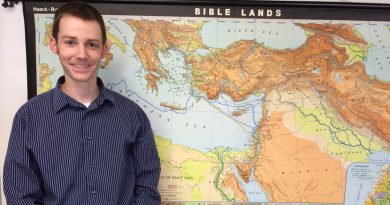 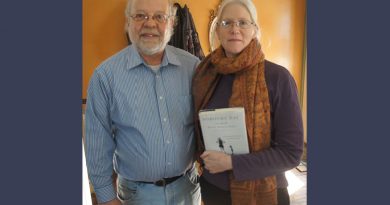