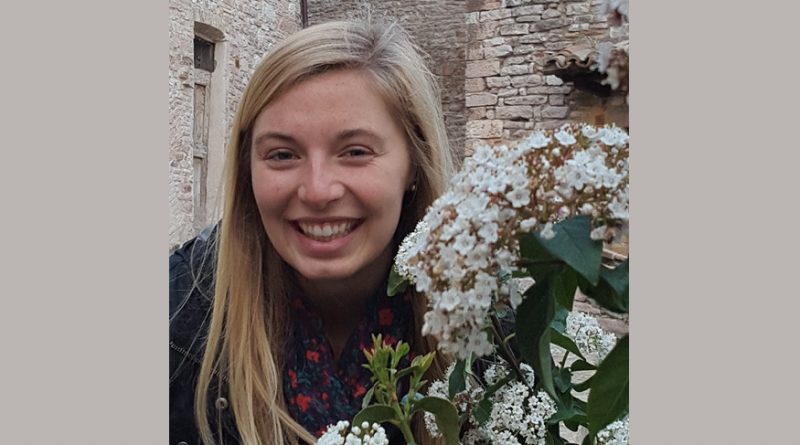 Will officially join the Catholic Church during Easter Vigil

AMES — For a “cradle Catholic,” someone baptized shortly after birth into the worldwide Catholic community, it can be difficult to answer the question, “Why are you a Catholic?” when challenged by others. If Catholicism is all you’ve ever known, there can be a tone deafness as to the pain­stakingly hard decision and the yearlong active process for becoming Catholic.

But despite the Catholic Church’s bumpy road through history, thousands of people around the world still leave behind their former beliefs and faith systems to enter the church every year at Easter. Why do people still seek membership in the church? What is it that is so attractive?

One graduating Iowa State student has offered her own unique pilgrimage story as a way of gratitude. Rachel Jones, a graduating senior with dual degrees in Spanish and kinesiology says, “I never intended to be Catholic. I was so blessed to grow up in a family that kept God at the center. I grew up Methodist, transitioned to a non-
denominational church as a middle-schooler, and my family and I went to church ­every Sunday. But it wasn’t personal.”

As it always is, middle school was a difficult time for her—fleeting thoughts of cutting her wrists, suicide, bouts of crying and a lack of healthy friendships all swirled around her. In her sadness, she kept asking the questions “If God is real, he would help me at some point. Does he even care? Is God even here?”

Finding a teen Bible and flipping through the pages one day, she found a prayer that said, “Lord, thank you for loving me enough to get me out of harmful situations. Help me leave my past behind, so I can enjoy your future blessings.” She says, “This was the first moment I realized God was real. I still have this Bible on my bookshelf by my bed at home.”

High school was a different story. She became friends with a group of girls that were a good match for her, and they called themselves the “core four.” She also began dating a boy, who of all things, was Catholic. He became her best friend.

“I was so against everything Catholic, and I don’t really know why,” she says. “I had heard so much about how we need to only follow the ‘Bible alone’ and keep God only in our life, and he would guide us. So, to me all this nonsense about faith working together with works instead of faith alone, tradition and Scripture going hand in hand together, instead of Scripture alone as the word of God, the Eucharist and the real presence of Christ was absolutely nuts. Saints and Mary and all these ‘idols,’ purgatory instead of just heaven, and so many other things, seemed to me like they were all just nonsense things that got in the way of people’s real relationship with God. And the Mass was SO dry and boring. Why people got down on their knees and recited things all the time instead of just praying was beyond me. It was about a true relationship with God, not just memorized routine. This is just a bunch of craziness, I thought.”

This led to many interesting discussions with her boyfriend, but he did impact her thinking when he told her the word “Catholic” literally meant universal and that the Catholic Church was the original church of Jesus rooted back to the apostles. Eventually, they broke up when college appeared on the horizon, and she was devastated. Why did she lose her best friend, and what was God showing her through all of this?

Studying abroad in Spain twice allowed her to see for herself the universality of the Catholic Church. She made a point to go to Mass in Spain, Italy, Hungary, Belgium, England and Greece. She spent two Palm Sundays at the Vatican attending Mass there. As she did this, she began to understand how that boring Mass with boring prayers used by millions of people all over the world tied them all together into one “home.” She walked the Camino de Santiago, a 500-mile pilgrimage walk across Spain with a friend, still asking the question, “What is God wanting me to do? Does God want me to become Catholic?” She found silence a necessary component for prayer as she visited Assisi and found truth in the saying of St. Francis, “Preach the Gospel at all times, and if necessary, use words.”

Returning to the U.S., she met again the former Catholic boyfriend, and they were able to heal and renew their friendship.

But no one can come to the Catholic Church in isolation. Mentors, friends, RCIA instructors at St. Thomas Aquinas Student Center all helped Jones find a “home” at last.

“The program at STA has been incredible,” Jones says, “and it has helped me to continue to learn more. Even more importantly, it has helped me make connections with people of strong faith to have continued support to grow more in my relationship with Christ.”

After entering the church this Easter, Jones will graduate from ISU. Her future plans are to spend a year growing spirit­ually and volunteering through Francis Corps to work in Costa Rica doing health care projects and therapy for those living in poverty and facing abandonment.

And when she returns to the U.S., she plans to marry that Catholic boy and move back home to Colorado to continue her studies as an occupational therapist.

“Looking back, three main questions I have asked myself all my life are: Who am I? What do I believe? Why do I believe it? For so long, I thought I knew the answers, and in my stubbornness, it took me a long time to slowly change my perspective and see how God truly wanted me to live my life. I had to, in a way, die to my old self, and find new life in Christ as I learned to seek out, listen and respond to these three questions.” 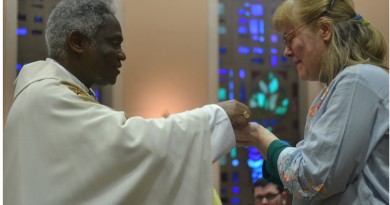 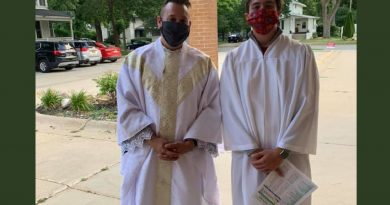 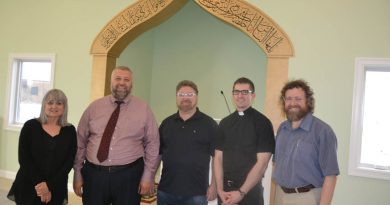 Catholic parishes of Dubuque give gift to mosque