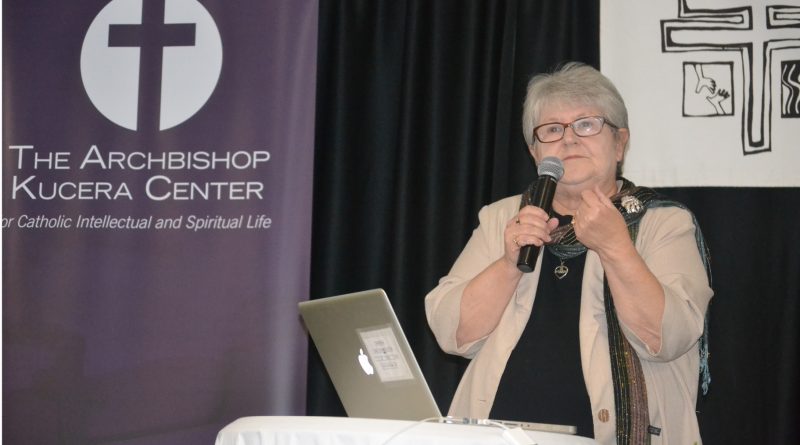 WATERLOO — Adapting to the combining or clustering of parishes spread out over greater distances, the sharing of clergy and church staff, and the integration of diverse cultures and languages are just some of the issues that characterize modern parish life, both in the Archdiocese of Dubuque and globally.

At the most recent Pastoral Leadership Study Day, about 200 leaders from faith communities around the archdiocese came together Oct. 18 at the Five Sullivan Brothers Convention Center in Waterloo to engage in a wide ranging discussion about how to best serve in a Catholic ministry landscape that has changed drastically in the last few generations. Dr. Kate Wiskus, the keynote speaker, focused a series of talks on “Complex Parish Ministry,” drawing on her own experiences of over 40 years working in parishes and other ministries. Mixing anecdotal evidence, statistical data and a bit of humor, the professor challenged the crowd to “transition from surviving to thriving.”

“What used to work is not going to work,” she said. “You can’t put a new community of faith in an old mold. It’s kind of like trying to put me in my granddaughter’s size five wedding dress. It wouldn’t be pretty.”

After painting a picture of the current trends in parish ministry, the professor, who currently teaches at Mundelein Seminary and the University of St. Mary in Illinois, offered tips on how to enhance the work of the church in the current environment. “We all know that in our parishes there are 10-20 percent of people that do 90 percent of the work, but part of that is our fault,” said Wiskus. “Everybody needs to engage somehow.”

Since 1965 in the United States, there has been a 70 percent increase in the number of Catholics (from 48.5 to 81.6 million), while at the same time a 39 percent decrease in the number of priests. The number of lay ministers has gone from zero half a century ago to over 39,000 today. In the Archdiocese of Dubuque, the total number of Catholics has remained about the same during that period (roughly 200,000), but there has been a 64 percent decrease in priests, according to statistics Wiskus presented. Over time, parishes have offered more ministries to an increasingly ethnically and ideologically diverse population and parish staffs have increased in size.

The current reality offers challenges, but also opportunities, according to the professor. Wiskus argued that success in this environment hinges on three key behaviors: being mission focused, collaborating effectively and being adaptive.

“Our primary mission is to grow the church by growing disciples,” she said.

During discussion, parish leaders commented that many spend a lot of time during meetings focused on how to survive as a community rather than the mission to grow the church. But some parishes found ways to change this focus.

“We use two-thirds of our council meetings on formation,” said Father John Haugen, a pastor of several parishes, including St. Mark in Edgewood. “To me, I’m convinced that if you do the formation first, the rest of these things fall into place.”

Wiskus agreed that there needs to be more effort to educate both children and adults in the faith, since many adults have not received good formation in earlier years.

Participants in the study day asked questions and gave commentary during the talks, and also engaged in small group discussions at their tables. Many representatives of parishes pointed out the challenges of bringing together people of different backgrounds, including growing immigrant populations, such as Hispanics, Burmese and others.

“While we are a church of tradition, we are a people of the future,” said Wiskus of the blending of parish communities. “We have to begin to look for new ways to fully realize our values. The transition is like a blended family and it doesn’t happen instantly. Both have to come to know the other. One culture will consider themselves the host and think there’s no need to change. Change is needed on both sides. You must find leaders in both cultures. They will not be comfortable filling a position on the council, for a while.”

Some participants had already had years of experience in clustering and combined parishes, such as the staff at Circle of Saints cluster, which combined about 11 years ago.

“Our hardest part was they (members of the parishes) felt they were loosing their identity,” Steph Babinat, business manager for the cluster. “We also have a Hispanic ministry. All of our churches continued with their religious education programs.”

Wiskus advocated making practical changes such as reducing the number of Masses when appropriate, delegating duties to lay people that clergy used to do or combining services to help each other.

“One of our biggest challenges was combining our bulletins,” recalled Babinat.

Some parishes that are not clustered felt the discussion was relevant, including St. Edward Parish staff in Waterloo. The parish has combined faith formation efforts with other parishes in the city.

“I think (the day) reinforced the reality of change and being more focused on mission,” said Pastoral Associate Toni Pint-Burke. “Big or small, clustered or not, there are certain realities that we all face.”

The study days are organized twice a year by the archdiocese and the Archbishop Kucera Center for Catholic Intellectual and Spiritual Life at Loras College.

“We have a day where people can gather and network,” said David Cochran, director of the Kucera Center.

More information on Pastoral Leadership Study Days is at www.dbqarch.org/offices/leadership-development-pastoral-planning/pastoral-leadership-study-day/ . 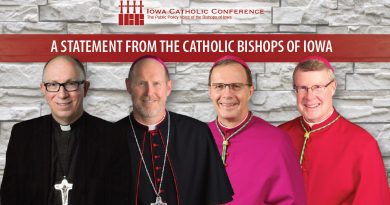 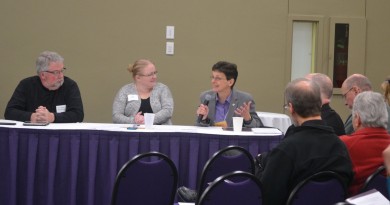