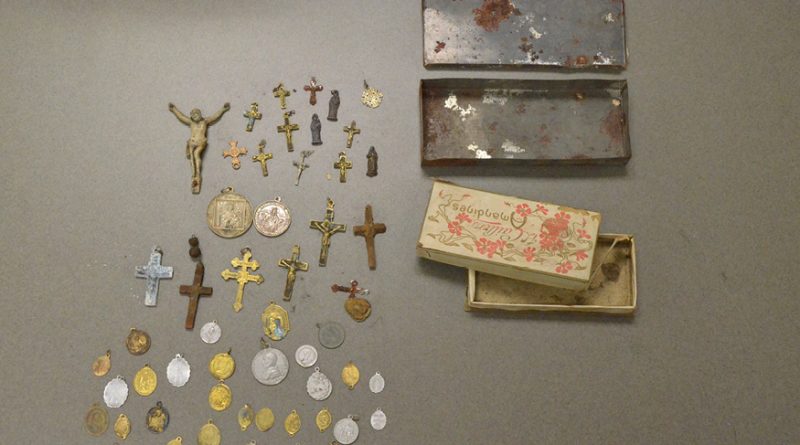 DUBUQUE — “This box was closed on the Feast of the Transfiguration. August 6th, 1907,” reads a yellowed piece of paper recently pulled from a time capsule found in the cornerstone of a razed Loras College dormitory.

The time capsule was discovered earlier this month by Mike Gibson, archivist for the college and the director of the Center for Dubuque History, and John McDermott, the college’s assistant vice president for physical resources.

The two men found the capsule in what had been the cornerstone of the north building of the Visitation Hall Complex, which was ravaged by fire on March 16, 2016. The cornerstone had been removed this January during the building’s demolition.

Before it was a residence hall for Loras College students, the building on Alta Vista Street in Dubuque had previously been owned by the Visitation Sisters who operated the Visitation Academy, an all-girls school, at that location until 1970.

When Gibson and McDermott opened the time capsule they found several copies of Dubuque area newspapers from the year it was sealed, as well as a large number of medals and other religious artifacts.

“Most interesting,” said Gibson, “was a letter dated 1907 listing the sisters who resided there at that time and some of the names of students.”

Gibson gave a copy of the letter to Sister Bernadine Curoe, SVM, one of four Visitation Sisters still living in Dubuque, so she could share it with the other members of her community.

“Seeing the lists of the sisters and the students who were alive at the time of the capsule was very meaningful to me,” Sister Bernadine said. “I knew many of them. Some I knew personally. Others, I knew of, or I knew their relatives.”

The items from the time capsule are not the first artifacts to be found in the remains of the Visitation building since last year’s fire. In December, a box was discovered inside the cross that had stood atop the cupola of the building. It contained numerous relics, prayer cards and other religious items placed there in 1959.

The contents of the box found in the cross were given to the Sisters of the Visitation. Gibson said the items of the recently discovered time capsule would be given to the sisters also.

“They have been a part of Dubuque’s history since 1871,” he said, “and these items are a significant piece of their heritage.”

Medals, crosses and other holy items were among the contents of a time capsule from 1907 found in the cornerstone of Visitation Hall, which was demolished after a major fire that began in 2016 as the result of a lightning strike. (Photo courtesy of Mike Gibson) 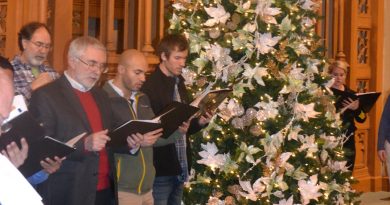 Lessons and Carols program to be held at cathedral