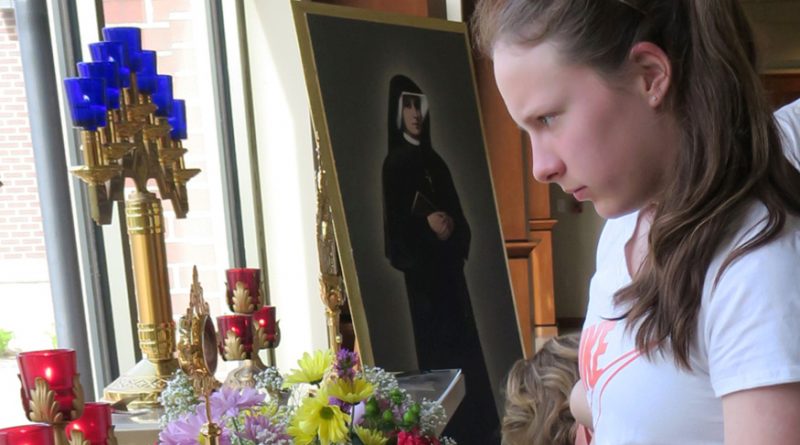 CEDAR RAPIDS — St. Patrick Parish in Cedar Rapids wouldn’t have survived the destruction caused by major floods in 2008 without divine mercy, so it’s fitting that this Catholic community is now vehemently promoting the mercy-centered message Jesus gave to a Polish saint.

Last summer, the parish obtained a first class relic of St. Faustina Kowalska, a nun who became famous after Jesus began appearing to her in 1924. She was given a vision of the resurrected Christ and was asked to spread his words to her worldwide — a phenomenon that led St. Pope John Paul II to declare the first Sunday after Easter Divine Mercy Sunday.

“We probably have the only relic of St. Faustina in the state of Iowa,” said Father Ivan Neinhaus, pastor of St. Patrick.

This past weekend, to commemorate Divine Mercy Sunday on April 23, the parish held special events, such as eucha­ristic adoration in its Divine Mercy Chapel and veneration of the relic. A highlight of the day for many was the opportunity to touch and pray with the reliquary, which contains a small fragment of the saint’s body.

The parish also displayed a first class relic of Blessed Michael Sopocko, the priest who served as spiritual director to St. Faustina. This item came into the parish’s possession very recently thanks to the devotion of seminarian Jacob Francios, a Cedar Rapids native, who requested it from Poland with Father Neinhaus’ help.

“We are now promoting his cause for sainthood,” said the pastor.

St. Patrick’s connection to the Divine Mercy message began shortly after the flood.

“How do you rebuild a parish that has been hypothetically destroyed?” Father Neinhaus and his people asked at the time. “(We decided) we’re going to have to pray ourselves back.”

As they began the painstaking process of rebuilding, the community decided to add a chapel to its parish center where eucharistic adoration would take place almost every day from 9 a.m.-9 p.m. The sacred space was later named after the Divine Mercy. In 2016, the pastor and a group of 10 young parishioners began planning a trip to World Youth Day in Krakow, Poland. That year, the parish hosted a large traveling relics display curated by Father Carlos Martins called “Treasures of the Church” that was very well attended. The participants decided to try to obtain a relic from St. Faustina and began filling out the necessary paperwork, which required, among other things, a letter from Archbishop Michael Jackels.

According to church rules, only a priest or bishop can request a first class relic, and it must be picked up in person.

“The information was sent two months before we left,” recalled Father Neinhaus.

The group attended World Youth Day July 25-31. On one of the last days of the trip, Father Neinhaus and a Polish host visited the nuns. They were initially told that since there are thousands of requests, the process could take up to two years. Then, unexpectedly, a nun at the convent came out with the relic. The relic of Blessed Michael Sopocko was a bit easier to obtain because he is not yet canonized. Two relics of his were sent through the mail.

On Divine Mercy Sunday, Jesus promised St. Faustina that those who receive Communion, pray the Divine Mercy Chaplet and go to confession would receive a remission of all sins, and any punishment due for those sins and other graces. In a series of visions beginning in 1924, Jesus spoke to the nun.

“If it hadn’t been for St. Pope John Paul II, we may have never known about the Divine Mercy image,” said the priest. “It’s not a new message. It’s been with the church for 2,000 years.”

Since encouraging the Divine Mercy devotion and adoration, Father Neinhaus has noticed some changes in the parish.

“We’re trying to feed our people spiritually,” he said. “I’m seeing an increase of people going to confession, especially during Holy Week. I would subscribe that to the (St. Faustina) relic.”

The relics of the saint and Father Sopocko are on display in the parish chapel and people are welcome to pray there whenever it is open. 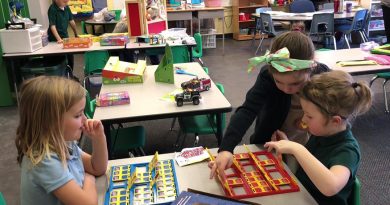 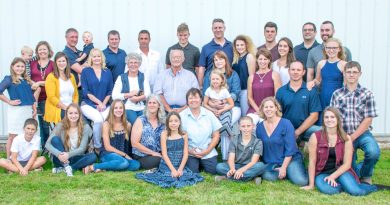 Support for students with special needs in Catholic schools growing 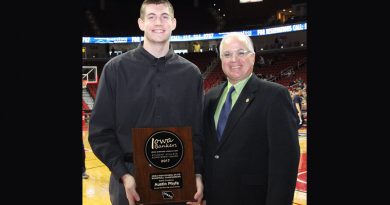