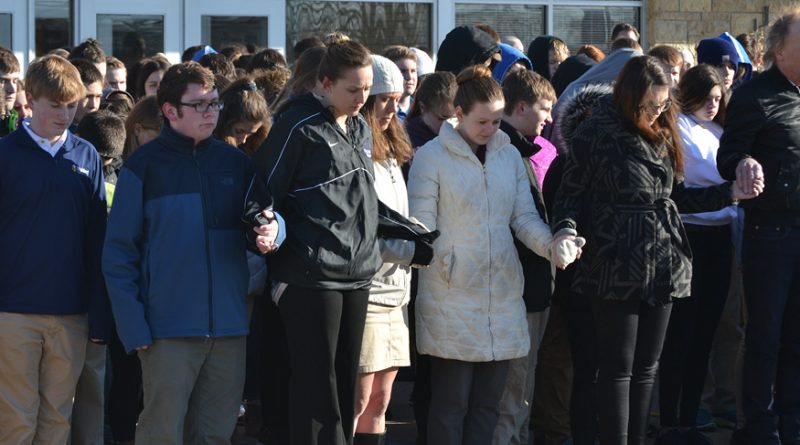 DUBUQUE — Students and staff at Wahlert Catholic High School recently held a prayer service outside their school building for the victims of the school shooting in Parkland, Florida, and for an end to gun violence.

“My Lord and my God, from the depths of our hearts, we offer up the victims of the Parkland Florida shooting into your hands,” said Archbishop Jackels in the opening prayer. “Be with them Lord. Comfort, heal and bless those affected by this event. We pray especially for life-changing conversion for all criminals and the violent — remove all evil from their hearts, fill them with your goodness and love that they may cease their evil work and that our schools be free from crime and violence.”

Dozens of students lined up outside Wahlert’s main entrance. The event began with an opening song. Students read Scripture from a podium. During petitions to God, the names of the victims were read aloud. Ribbons were tied on 14 trees around the campus and three on the main flagpole to symbolize the deceased.

Abby Burns, a senior who is president of the Students Teaching Others Peace (S.T.O.P) club, offered a reflection. Wahlert students formed the organization after the Columbine, Colorado, school shoot­ing in the late 1990s to promote peace.

“Those 17 victims did not die in vain, and their lives will be remembered by the action we take today. Indifference is not an option,” said Burns during the event.

She mentioned that the 14 trees on campus were originally planted to symbolize the Stations of the Cross.

“We can find strength and comfort in the heart of our Lord who knows and is experiencing our same sorrow,” she said.

With the political debate over guns and gun laws being very intense in the wake of the shooting, Burns said organizers’ intent in holding the prayer service was not to take a position in the debate on specific policy.

“I know there are a variety of different beliefs held in a Catholic school, so we were pretty careful in planning this because we didn’t want to take a political stance on it, but I think no matter what political background you have, we all want an end to gun violence,” said Burns after the event.

Prayer services like the one at Wahlert were held at Catholic schools around the nation. The March 14 “pray-outs” were offered in some areas as an alternative to a national school walkout organized for the same day. On March 24, the “March for Our Lives” is being planned in Washington, D.C. Students at Xavier Catholic High School in Cedar Rapids are working with other schools to hold an event locally on that day in Green Park, according to Kim Hermsen, superintendent of schools for the Archdiocese of Dubuque.

He also advised that some sponsors of the national March for Our Lives “are not sympathetic to the Church’s teaching on the dignity of life at all stages.” (See full statement beginning on Page 3).

On social media, #PrayOutforPeace is a hashtag circulating to promote the prayer efforts.

Students and faculty of Wahlert Catholic High School hold hands while praying the ‘Our Father’ during a prayer service March 14. (Photo by Dan Russo/The Witness) 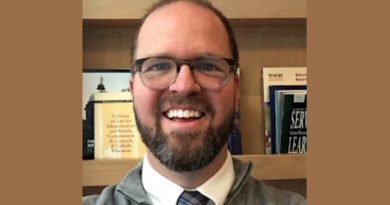 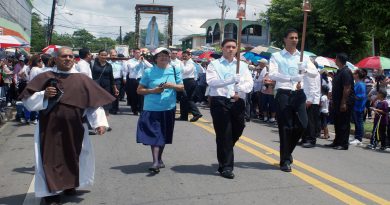 Bishops say Our Lady of America apparitions were not supernatural 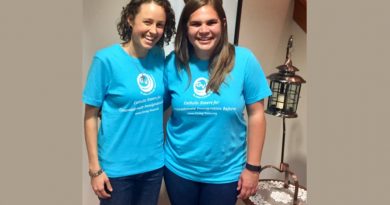 100 gather in Dubuque to pray for immigration reform