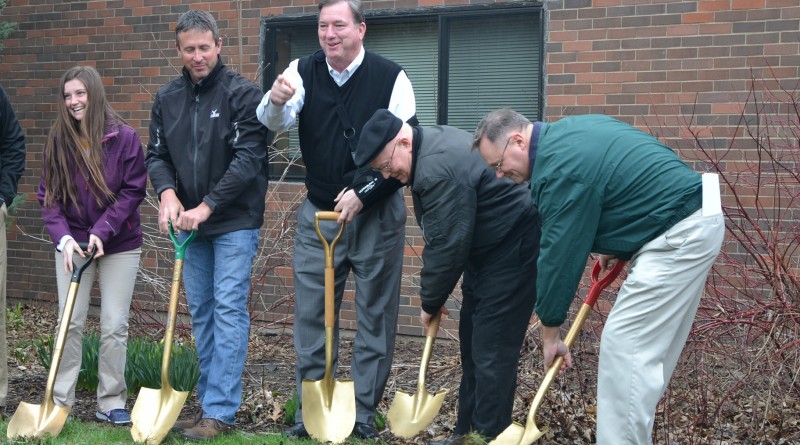 DYERSVILLE — Wet weather didn’t deter dozens of students, faculty, parents and other supporters of Beckman Catholic High School from attending a blessing and groundbreaking for a major renovation project recently.

On March 31, Archbishop Michael Jackels led the ceremonies held near the front entrance of the main school building. “I’ve been identified as a special guest, but I’m really not special or a guest,” the archbishop told the crowd during the opening prayers. “Perhaps the special guests are those who are seated in these chairs, obviously not students, and I would presume you are representing people who are interested in supporting this project in one way or another. It is something to recognize and be grateful for. There are people who are supporting this project who do not have children, do not have school-aged children, but nevertheless they’re contributing in support of this. For your sakes, certainly, but also for the sake of the local community, our state of Iowa, our great country the United States — even the world.”

Over the last two years, the Beckman community has raised approximately $7.5 million to fund an upgrade and expansion of the school facilities, part of the “Blazing Forward Capital Campaign” which is slated to last through 2018. The campaign aims to increase the endowment by $3 million to provide for scholarships and other needs, to fund improvements to existing structures and to expand. “As we get ready to celebrate the 50th anniversary of Beckman Catholic, it’s good to remember the efforts that went into that — the original task of putting this building up; it’s good also that we’re continuing this idea and goal of Catholic education in our community by doing our part here presently and for the future,” said Principal Pat Meade as he introduced the archbishop. “Through this entire process, I’ve been recalling one of my predecessors, Sister Mary Clare (Miller, former assistant principal, 1966-87) … I saw a quote she put down at one time and I’m going to repeat it to you now, ‘When asked to do the work, when asked to make the sacrifice, do it with a gladness of heart and a joy in your soul because we believe in being Catholic, we believe in Beckman’ and I would add, we believe in blazing forward.” The school founded in 1966, currently educates about 400 students in grades seven through 12 from Dyersville and the surrounding areas. The renovations to the existing building will include: increased security at the front entrance, an upgrade to science labs and ventilation, improvements to student lockers and restrooms. The expansion will include the addition of a 24/7 adoration chapel near the front entrance, a multi-purpose room and upgrades to locker rooms, among other improvements. Students Casey McCarraher and Elise Westhoff, in their final year at the high school, read from Scripture during the groundbreaking celebration.

“(Beckman) has been my home for the last six years,” said Westhoff. “I think (this construction project) shows we’re doing something right here.”

“I think this shows how much value the community puts in Catholic education,” added McCarraher.

Archbishop Jackels sprinkled holy water on the ground and into the crowd during the blessing, taking a moment to make sure the students in attendance got their fair share. He addressed them specifically during his remarks.

“We are conscious of and careful for not just the body represented in the practice gym on the back of the school, and not just the mind represented in the classrooms in the middle of the school but also in your soul, in the soul of every human person represented in the chapel that will be on the front end of this school,” said the archbishop. “It is something that inspires our efforts in a project like this. So we’re grateful to those who will do the work and we ask God that they will do it safely and under bid or for free if God so inspires, but we also ask that you, the students present and in the future, use this facility — this school well, for the sake of your body, your mind and your soul.”

After the ceremonies, seventh-graders Liz Wessel, Maria Dominguez and Abbey Mensen reflected on the importance of the project and on having a Catholic school in their community.

“Not every kid gets to talk about their faith in school,” said Wessel. “They’re building a chapel so I hope it helps inspire people.”

The girls expressed gratitude that they are able to make their spiritual lives part of their education.

Photo: Beckman community representatives share a laugh while digging on the site where a new chapel will be built for the high school. 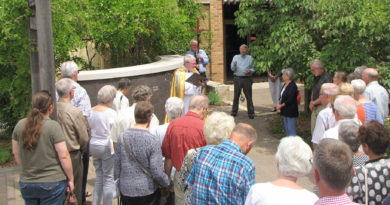