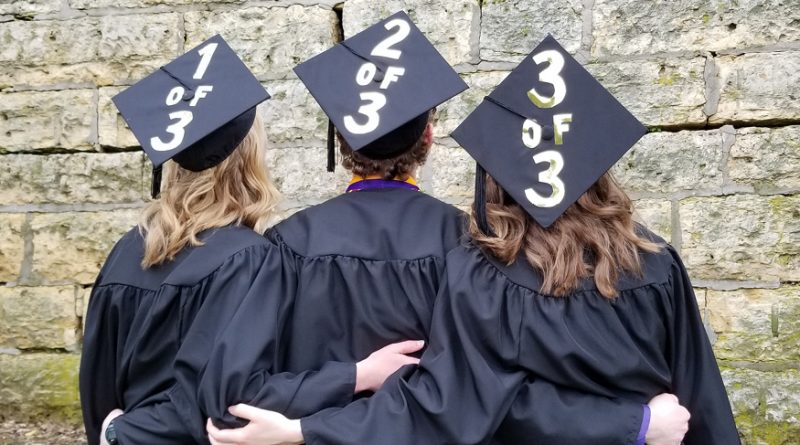 “1 of 3,” “2 of 3,” and “3 of 3” read the tops of the Kuboushek triplets’ caps at their Loras College commencement. The three siblings, who walked across the stage one after another at the ceremony, held May 18 in Dubuque, had decorated their graduation caps to denote their birth order.

As they celebrated at commencement that day, the Kuboushek triplets — oldest Kelly, middle-born Matthew, and youngest Nicole — were marking the symbolic ending of a college experience that had deepened their already strong Catholic faith. The three now continue down different paths, all living out that faith in the vocation to which they feel called.

The 22-year-old triplets grew up on a dairy goat farm near Spillville. The children of Chad and Cathy Kuboushek, they have four older siblings, three of whom also went to Loras College. The triplets attended Calmar-Festina-Spillville (CFS) Catholic School during their elementary and middle school years, followed by South Winneshiek High School. They grew up active at St. Wenceslaus Parish in Spillville.

Religion is incredibly important to all three of the Kuboushek triplets. “I would say my relationship with God and the Catholic faith truly is the center of my life,” said Nicole, expressing a sentiment shared by her siblings.

The three credit their parents and the family life they had when they were younger with creating a firm spiritual foundation for each of them.

“The thing really important in our formation was just having that Catholic faith as we grew up, having it at home,” said Matthew. “Being raised on a farm, our parents were often around to influence our development. They prayed with us. And we went to Mass. I would say that that contact with our family and prayer was very important to us all.”

After they graduated from high school, each of the triplets decided to continue their education at Loras. At the college, they said, they had experiences that developed their faith further. They became involved with the activities offered on campus by FOCUS (Fellowship of Catholic University Students) missionaries, and each of them participated in Bible studies.

While at Loras, the triplets enjoyed the opportunity to frequently participate in the sacraments, including daily Mass, and to pray regularly at eucharistic adoration. “Having that availability,” Kelly said, “was really formative in my faith and my college experience.”

Kelly also said she met many good people while she was a student at Loras and she was able to build “friendships rooted in Christ” that helped her deepen her faith still more.

Since their commencement, Matthew has completed a summer course and officially wrapped up his college requirements. Though he is still in a time of discernment, Matthew said he is currently seeking religious life.

“Toward the beginning of college,” he said, “I was wrestling with the idea of maybe being a priest or a religious. And I started attending Mass daily and praying the rosary every day. After a while, I began to feel more and more that I was called not to marriage, but to either the priesthood or the religious life.”

By visiting and communicating with several different religious communities and also a couple of dioceses, Matthew came to believe he was called to monastic life. “That’s what I would like to do with the rest of my life,” Matthew said, “be a monk.”

Matthew has plans to visit a group of Carmelite monks in Wyoming in the near future to explore whether the community might be a good fit for him. While stressing that his future at the Carmelite monastery is tentative, he said he is hopeful about a vocation there. In the interim, Matthew plans to get a job locally so that he can pay down his college debt, which he will need to eliminate before he can join a religious order.

Though Kelly and Nicole both walked at Loras’ commencement in May with their brother Matthew, the two young women had actually completed their credits a semester earlier in December 2018. Kelly has since moved to Altoona and works for Pella Corporation as a junior content producer. Nicole is in Iowa City employed by the University of Iowa Hospitals as a support services specialist. Since they graduated from Loras, both Kelly and Nicole have also gotten married.

Nicole was united in marriage to Steven Landa on Dec. 29 of last year. The new Mr. and Mrs. Landa visited Italy and the Vatican after their wedding in a honeymoon that also served as something of a pilgrimage. They saw religious sites such as the tombs of St. Francis and St. Claire and visited numerous shrines. They also had the opportunity to receive a blessing from Pope Francis.

The Holy Father has a general audience most Wednesday mornings, and during the conclusion of that audience, the pope blesses newly married couples who come to the Vatican dressed in their wedding attire. Tickets need to be obtained ­prior and a copy of a marriage certificate brought along. Nicole and her husband sought a blessing while on their trip in January.

“It was incredible to get up early in the morning and put my wedding dress back on and get all dressed up like it was our wedding day again,” remembered Nicole, who said she and her husband arrived at the Vatican gates early that morning, hoping they might get to meet the pope when he arrived in the building.

“During the audience, we were blessed to meet the Holy Father,” she said. “I thought he smelled like incense,” she added, with a laugh. “He congratulated us, gave us a blessing, and he asked us to pray for him.”

Kelly married her high school sweetheart, Devin Franzen, this April 27. Though Kelly discerned religious life for a short time, it was married life, she said, that was always the desire of her heart. “They say you know your vocation by the joy that it brings, and so that is kind of what I think led me to married life,” the happy newlywed said.

The Franzens also visited Italy and the Vatican on their honeymoon this spring and received a newlywed blessing from the pope while they were there. Hauling around a wedding dress in Rome wasn’t the easiest, Kelly joked, but it was worth it in the end. Kelly said they got to meet Pope Francis, and he touched their hands as well as a rosary they had brought with them. He also asked for their prayers, and they asked him to pray for them in return. “It was a very neat experience,” she said.

Cover photo: Kelly, Matthew and Nicole, the Kuboushek triplets, are shown (left to right) in birth order. They graduated from Loras College, attending the 2019 commencement ceremonies together. (Contributed photo) 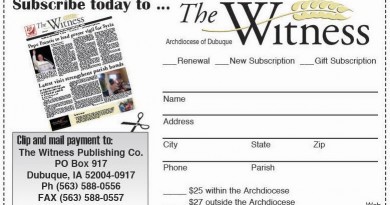