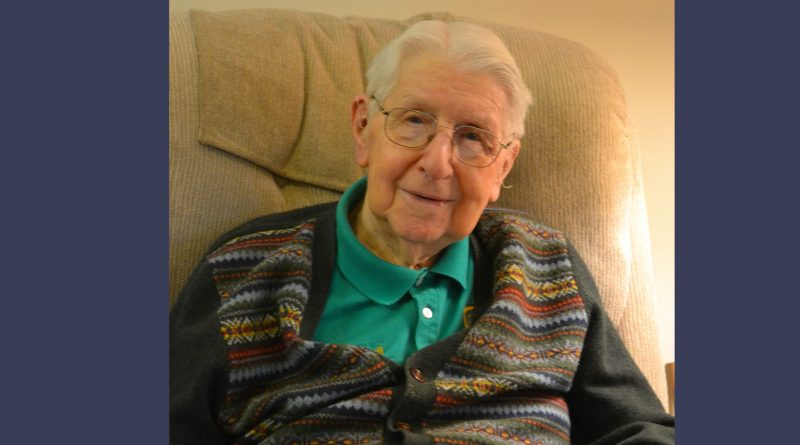 DUBUQUE — In one of the 14 books Msgr. Francis Friedl has written since his official retirement, he described what it means to be a “legend.”

“I defined legends as ‘individuals whose qualities are combined in such a way that they are in a class by themselves, extraordinary, unforgettable, people who march to the beat of a distant drummer,’” wrote the priest.

In his books “Loras Luminaries,” “Legends of Dubuque” and “’Doc Kammer Lives,” the former Loras College president told the stories of many remarkable people who are considered local legends, but it could also be argued that the author himself is a legend, although, his humble character would preclude him from acknowledging that.

The 98-year-old celebrated his 73rd anniversary of being ordained on April 26, and holds the distinction of being the oldest and longest serving priest in the Archdiocese of Dubuque. He took a few moments recently to reflect on his years in ministry at his apartment in Villa Raphael, a residence for retired priests in Dubuque.

“I didn’t think I’d live this long,” said Msgr. Friedl, sitting in a chair surrounded by books. “I’m just lucky I guess. I’ve behaved myself with what I eat and so on. That helps.”

His living space is decorated, in part, with pictures of Loras College and the two churches where he served as pastor — St. Joseph in Elkader (1977-84) and St. Columbkille in Dubuque (1984-87). But most noticeable are the images of the covers for the books he wrote hanging on a wall in his living room. One — titled “Phi Thuong” — is a Vietnamese translation of “Extraordinary Lives,” a book that recounts the stories of 34 priestly vocations. “Most of the things I’ve done since I’ve retired are those books,” said Msgr. Friedl. “None of those were done while (I was in active ministry).” Born in Waterloo to parents Philip and Mary Rose (Schares) Friedl in 1917, Msgr. Friedl has had a passion for reading and writing his entire life. He began considering the call to the priesthood early thanks to the positive influence of clergy in his hometown.

“The pastors that I had when I was a kid were very good men,” he said. “I admired them so much.”

After finishing Sacred Heart High School, he graduated from Loras College in 1939. Msgr. Friedl completed seminary at St. Mary of the West Seminary in Norwood, Ohio. He was ordained in 1943, beginning his ministry as an associate pastor at Nativity Parish in Dubuque. A talent for academia and a thirst for knowledge led him to being an instructor at Loras in 1947. From then until 1971, he held various positions at his alma mater, including professor of psychology, executive vice president and academic dean. He earned master’s and doctorate degrees in psychology at the Catholic University of America (1950-54). In 1971, Msgr. Friedl was promoted to president of Loras College, a position he held until 1977. His love for Loras runs deep and he has continued to keep up with current events at the college.

“I think Loras College is doing a great job,” he said. “This president (Jim Collins) is very good at keeping the Catholic identity at Loras.”

Msgr. Friedl has always had a keen interest in preaching. In fact, he wrote a book on it called “Homilies Alive.”

“I liked to study homilies,” he said. “Any book or any movie that showed how to give a homily, I think that’s so important. One of the most important things a priest does all of his life is the homilies he gives.”

Experience has taught the veteran homilist a thing or two about speaking during Mass.

“Make them short and make them accurate,” said Msgr. Friedl. “If you can’t give (a homily) in seven minutes, then you’re not a good homilist. If you work hard on it and review it and review it, you cut out a lot of the nonsense. Make a very brief homily, but make it count.”

Although the former president is known best for his achievements in the classroom and as an administrator, winning the First Citizen Award of Dubuque in 2008, his most cherished part of his many years in ministry is his time as a pastor.

“I worked at Loras College for 15 or 20 years,” he said. “When I went to Elkader, that was the first time I was ever a pastor. I loved it. The best thing is being able to serve your people and to help them.”

Msgr. Friedl is done with writing books now and spends most of his days reading. He concelebrates Mass every day in the Villa Raphael Chapel with his fellow retired priests. His health is good, and although he can’t do all the things he used to do when he was younger, he says there are some benefits of age.

“I think your judgments are a little more balanced in old age than they are when you’re very young because … you can put things together a little easier,” he said.

“Love your priesthood and respect it and love your people and respect them,” he said. As he contemplated his 73 years in min­istry and 98 years of life, he said he is grateful for many blessings. “I don’t think I would change anything,” reflected Msgr. Friedl. “I’ve had a wonderful life. I just would like to thank the archdiocese, the priests, the bishops and all the people for the opportunity to serve them. It’s been a great favor for me.”