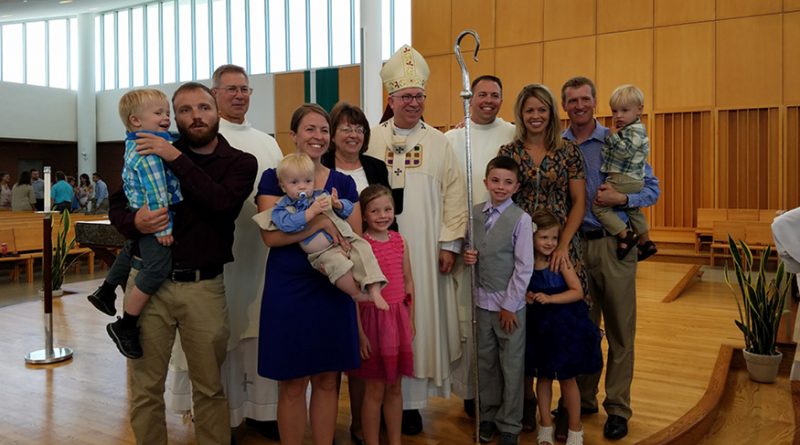 TOLEDO — After a period of intellectual and spiritual exploration, a quest to go deep into Catholic apologetics eventually led Andy Upah to leave the computer industry and follow the call to the priesthood.

“I had to discover my faith before I could discover my vocation,” said Deacon Upah, now a transitional deacon who will be ordained a priest May 26. “Although I was raised in the church, was an alter server, attended religious ed and youth group, I still wasn’t convicted in my Catholic faith. Back in the spring of 2007, my dad invited me to a men’s conference in Cedar Rapids, and the keynote speaker, Curtis Martin, talked about the Eucharist and confession straight from the Bible. I grew up Catholic, but had started exploring other denominations in and after college, and when I heard about those two doctrines, which are particularly Catholic, I realized that the Catholic faith had to be the true Christian faith and that I had been missing other things that were probably equally clear in the Bible.”

Deacon Upah began reading the Bible seriously and receiving the sacraments more often. Over time, he was drawn closer to the church on a gradual basis.

“I then discovered the Marian apparitions and began to pray the rosary and read spiritual books, which led me to attend daily Mass and eucharistic adoration,” he recalled. “And through it all, I started to gain a deep appreciation for priests, realizing how important they were to provide encounters with Jesus in the sacraments.”

The desire to share what he was learning with the people in his life, including two women he dated during those years — one a Protestant and one a Catholic — took him in a direction he didn’t initially anticipate.

“In early 2009, I was dating a great girl for three years, had a great job in West Des Moines, and found myself having thoughts of attending seminary but reluctant to give up the life I had,” remembered Deacon Upah. “I continued to learn and grow in my faith, feeling like I needed to be more involved in the church and perhaps even change careers to work in the church helping people learn more about their faith and not walk away like I had almost done.”

While still dating, Father Mike Mescher invited Upah to go to an Operation Andrew Dinner in Ames where he met then Vocations Director, Father David Schatz.

“I was feeling more called to priesthood than I was to married life, so I said goodbye to my girlfriend and applied to seminary,” Deacon Upah said. “I was accepted by the Archdiocese of Dubuque in the summer of 2012, quit my job and entered seminary at St. Pius X Seminary at Loras College in Dubuque.”

Deacon Upah, 36, grew up in Toledo, with two younger sisters — the son of Deacon Stan Upah, an entrepreneur, and his wife Charlotte, a CPA. The family attended St. Patrick Parish in Tama.

After high school in South Tama County, Deacon Upah studied computer science at Buena Vista University in Storm Lake. Starting off as a programmer, he later became a project manager at the firm he worked at for almost a decade before entering the seminary at the University of St. Mary of the Lake in Mundelein, Illinois.

“My favorite part of seminary was spending almost 10 weeks in the Holy Land,” he reflected. “It was an incredible experience, learning and visiting the sites, seeing the places where Jesus and many saints walked really made Scripture come alive for me.”

As far as spiritual influences go, Deacon Upah enjoys the writings of St. Ignatius of Antioch, an early martyr of the church, and St. Padre Pio. When he isn’t working or studying, he likes playing or watching sports or spending time with his friends and family.

Other than his own parents, Deacon Upah lists his three home pastors for the last 30-plus years as influential on his spiritual journey. They are Fathers Ernie Engler, Keith Birch and Mike Mescher.

Deacon Upah is looking forward to starting his ministry.

“I’m very excited to be ordained a priest and get ‘back to work’ after six years back in school,” he said. “I’m excited to be able to provide the sacraments to the people of God in the Archdiocese of Dubuque or wherever I am called to serve. I’m nervous because I know no matter how much I have prepared over these six years of seminary and really my whole life that the priesthood will be different and more challenging than I expect, so I will have a lot of learning to do right away.” 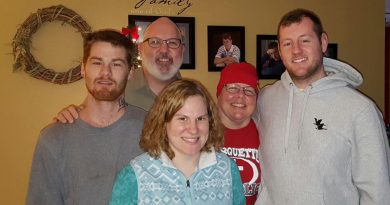