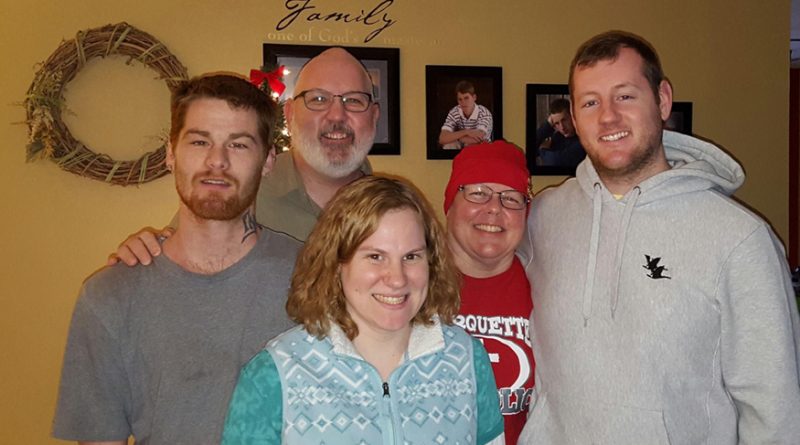 CEDAR RAPIDS — When it comes to the priesthood, an increasing number of men in the United States are hearing God’s call later in life.

This fact received widespread attention after a 2013 survey conducted by the Center for Applied Research in the Apostolate (CARA) at Georgetown University found that the age of priests at the time of their ordination had gradually increased, with the average age that year being 35.5.

Traditionally, a significant majority of men being ordained have been in their 20s. As of the 2018 survey, that is still true, but it is more common now to see candidates entering the seminary in their 30s, 40s and beyond. In the Archdiocese of Dubuque, there are two examples of seminarians now in formation that are part of this vocational trend.

Deacon Sean Smith of Cedar Rapids is no stranger to the title “father.” As the dad to three adult children, it is one he has held for many years. But that title will take on an additional meaning in the spring of 2020 when he is ordained a priest for the Archdiocese of Dubuque and becomes known as “Father Smith” to the people he serves.

Fifty-three-year-old Deacon Smith has recently been accepted to Mundelein Seminary in Illinois. Given his years of diaconate formation, his previous graduate studies in theology, and his decade and a half as an ordained deacon, his priestly formation path will be a bit different. Deacon Smith will study at Mundelein for two years, rather than the typical four, before he will be ordained a priest.

Deacon Smith, a New York native, grew up in Michigan and lived in Ohio, North Carolina and Texas before transferring with the company he worked for to eastern Iowa in 1993. He came to Iowa with his wife, Sara, with whom he raised children Duane, Ryan and Felicia. The couple was married for 30 years before Sara died in 2016 following a three-year battle with breast cancer.

Deacon Smith first recognized his call to ordained ministry in 1992 when he attended a charismatic conference with wife Sara and some other members of his family. At the closing liturgy of the conference a bishop did an “altar call” for those that might be considering a vocation as a priest, religious or a deacon.

“I felt ‘called,’ so I responded, much to the surprise of my wife and family!” Deacon Smith remembered. “I was only 27 years old at the time, so it took a while for the vocation to develop.”

He was ordained in 2003, and since that time has served in several parishes in the archdiocese, including St. Joseph Parish, Marion; SS. Peter & Paul Parish, Springbrook, and St. Joseph Parish, Bellevue; and most recently, St. Patrick Parish, Cedar Rapids. As a deacon, Smith has helped with preaching and religious education, CEW retreats and the RCIA program, baptisms, weddings, funerals and visiting the sick.

Deacon Smith said he is pursuing the priesthood for the same reason he pursued the diaconate — because he believes God is calling him to it.

“Actually, it feels like this call to be a priest is really just a continuation of that call 25 years ago,” he said.

Smith said that his wife was and remains a part of his journey to the priesthood. “Sara and I talked about the possibility of my becoming a priest, and I know that she is praying for me,” he reflected.

Deacon Smith said that as a deacon preparing couples for marriage or families for baptism, he has drawn on his own experiences as a husband and father. He said he will do the same as a priest, and as someone who has now experienced the death of a spouse, Deacon Smith said he will be able to relate to those he ministers experiencing that same grief too.

Aware that he’ll be at a different age and in a different place in his life than most of his fellow seminarians, Deacon Smith admitted, “I had a bit of anxiety about the ‘challenges’ I might face, but the Lord is calming most of those anxieties. My experience with the other seminarians over the past few months has been wonderful. I’ve been welcomed and accepted as a brother … .”

When asked how his own children have reacted to his decision to enter seminary, Deacon Smith said, “I think they think it is pretty cool.”

This spring, Deacon Smith left his job at Rockwell Collins in Cedar Rapids as he prepares for seminary and priesthood. As he ends his 32-year-career in information systems and technology, he said he looks forward to his ministry to come.

“I have experienced the love and mercy of God in my life and been fed by the sacraments, and I want to be able to share that with others,” he reflected. “I want to walk with others on their journey of faith and accompany as many to heaven as I can.” 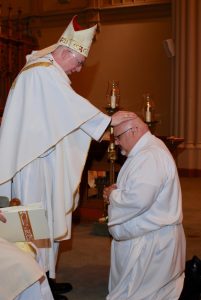 Deacon Jim Goerend, a native of West Union, was ordained a transitional deacon this May and will become a priest after one more year of formation at Mundelein Seminary near Chicago. Discerning his calling has been a long and winding road. The deacon grew up in St. Lucas. His community was always very supportive of vocations to the priesthood and religious life. The small town of about 200 people has sent 27 of its men to the priesthood and 50 of its women to religious life since the early days of the archdiocese, according to the deacon.

Deacon Goerend first considered the priesthood as a Catholic elementary school student there. At Loras College, he entered the seminary program during his sophomore year. At one point he was a roommate with Father Phil Gibbs, and the two became friends, but his priestly discernment process was put on hold after he left the program to date someone.

He eventually dropped out of college, lived in many different places and tried a variety of jobs before returning to the University of Northern Iowa to finish an education degree.

After teaching for a while, the call to ministry grew louder, until one day he had a powerful experience while listening to a homily at Mass while he and his mother visited a church in Wisconsin.

“The pastor was talking about vocations,” recalled Deacon Goerend. “His message was ‘why aren’t you saying yes to this vocation?’ It felt like there was no one else there and he was talking to me.”

The deacon described his younger self at points “running away” from God’s call. The deacon quit trying to evade the “Hound of Heaven” and entered Mundelein at age 45. He feels society’s focus on materialism and status might delay some men from pursuing a priestly vocation.

“Then, they find that happiness is not just money in the bank or a three-car ­garage,” he said.

In his case, he believes he had to experience what he did to be ready for his vocation.

He credits good formation and catechesis for the foundation some of his younger classmates have that allowed them to pursue their vocations at a younger age. At his seminary, however, he isn’t the oldest student. Some are in their 50s and 60s. There are challenges to answering the call later in life, he said. For example, it can be hard to relate to some aspects of the program geared to men in their 20s. Nonetheless, his teachers and classmates have been supportive, and there are also advantages to having life experience when it comes to learning the many practical aspects of being a priest. The older seminarians meet monthly for a support group that they jokingly call the “AARP club.”

Deacon Goerend is looking forward to being a priest. Looking back, he reflected on obstacles he put in his own way on his path to his calling. He has a message for those thinking about the priesthood.

Deacon Sean Smith (back row, left) is shown in the last family photo taken with his wife, Sara (back row, right), on Christmas 2015. The Smiths are with their children, (l to r) Duane, Felicia and Ryan. (Contributed photo)

Part 10: The vocation of marriage 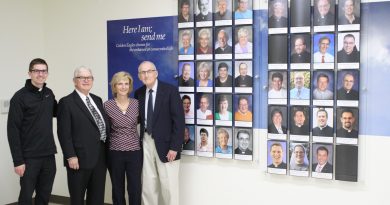