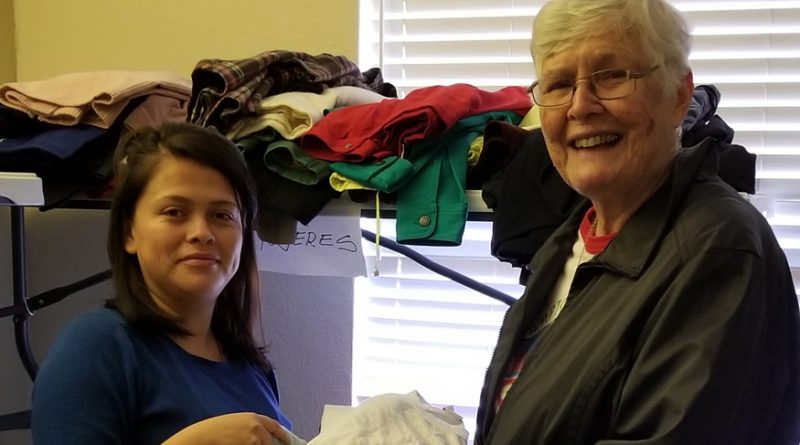 Reflects on experience with migrants in El Paso, Texas

By Sister Maura McCarthy, PBVM
Special to The Witness

The city of El Paso could be considered the city of “a thousand welcomes.” It seems to be overwhelmingly a Latin city. One store clerk said that 95 percent of the inhabitants are bilingual. Most of the persons that we met in church, at the center or in the stores seemed so strikingly Latin.

Our neighbors from the South are arriving from Guatemala, El Salvador and Honduras to the city of El Paso, Texas, “the passage” to the North. The overwhelming majority are from Guatemala, lesser numbers come from Honduras and El Salvador, and several families are also arriving from Cuba and Brazil. They are turning themselves over to Immigration and Customs Enforcement (ICE) seeking asylum. Their experience in the ICE facilities is not always so positive. One man from Honduras spoke of being treated like animals.

There are up to 1,000 persons a week being released from the ICE facilities in El Paso to be reunited with family all over the United States previous to their “court date.” This number can go up to over 2,000 persons. It is absolutely essential that centers of hospitality like those sponsored by Annunciation House, which includes Nazareth House, and some other 12 welcome shelters, under the auspices of Annunciation House, provide shelter, beds, showers, food, clothing, and facilitation of bus and plane tickets provided by family members.

On Christmas Eve, over 100 refugees were released to the streets of El Paso, rather than to the houses of hospitality. This, ICE said later, was a mistake. The people of El Paso showed up by the dozens to respond to this need providing food, clothing and shelter.

Our presence came about when the Leadership Conference of Women Religious (LCWR) received an urgent request for economic help and for volunteers to give hands-on ministry to the immigrants in these hospitality centers. The Dubuque Presentation Sisters, along with the Presentation Sisters from Aberdeen and Benedictine Sisters from Yankton, South Dakota, responded by sending sisters on Dec. 6, to El Paso, Texas. Sisters Maura McCarthy (Dubuque), Myra Remily (Aber­deen) and Clarice Korger (Yankton) became a volunteer team at Nazareth House, one of the nearly 15 immigrant hospitality centers sponsored by Annunciation House in El Paso.

The sisters live at the former Loretto Sisters Convent, part of which is a center of social services for the city of El Paso. The volunteer sisters who live in the Loretto Convent have come from all over the United States. Several are seniors and one sister humorously remarked that she would like to write a book about the “over 80” group of volunteers. Most are bilingual, but several are not. The volunteers provide services such as recording basic information when the immigrants arrive, assigning rooms and providing bedding, making phone calls to the families, distributing clothing, packing lunches for those traveling, providing basic medicines, cooking and serving meals, driving immigrants to the airport or bus station, as well as being a welcoming presence.

For nearly three days, Sisters Maura, Myra and Clarice were asked to prepare breakfast, dinner and supper for the immigrants. This was in response to a pressing and dire need. All were grateful that Sister Myra had some past experience in food service management for large numbers of persons. Sister Clarice was a practicing LPN before becoming a Benedictine. This skill was frequently needed by persons suffering from colds or upset stomachs.

Sister Myra wrote about her experience of the “miracle happenings at Nazareth Shelter”:

God, the angels and saints are giving us many miracles that pop up ­every day. There are the miracles of getting them off to their destination by air or by bus and getting volunteer drivers to get them to the station or airport. (hard to get drivers). I believe in the multiplication of the loaves and fishes after this first week of work. There is the miracle of finding cooking supplies and serving enough food was a peak one for us. The miracle of many religious orders that have answered to call to come and have come at the right time.

The volunteer endeavor has been a rich interchange with the courageous and risk-taking immigrants from Central America; an opportunity to share mission with many volunteers from El Paso; and an invitation to share community with religious sisters from all over the United States. Sisters Myra and Maura especially enjoyed being in mission together after a hiatus of some 12 years.

Reuben Garcia, founder of Annunciation House, provided conceptual and practical orientation to the religious sisters arriving to offer services to the migrants there. Reuben explained that the refugees are offered a shower, a complete change of clothing, beds with clean sheets and blankets, and meals until contact is made by the volunteers with relatives and friends who sponsor the migrants’ travel to towns and cities across the United States.

He stressed that the volunteers need to be ready for any and every necessary service: reception of the immigrants with intake; explanation of the logistics of the center of hospitality; assignation of rooms; house cleaning; cooking and serving of meals; laundry of bedding and towels; distribution of clothing, clean up and sorting of clothes; telephone contacts with the sponsors; preparation of travel packs with sandwiches, snacks and liquids; driving and/or obtaining rides to the bus station or airport, among other tasks.

He spoke recently at a conference of pastors about the massive calamity happen­ing in El Paso and other areas along the border. The pastors asked what they could do to help down there. He responded with great passion: “You must understand that this is not just a problem ‘down there.’  This is a massive human problem that is befalling ‘nuestra gente’, our family — my family. We need to do something about what is happening to our brothers and sisters!”

Sister Maura McCarthy, joined by other Presentation Sisters across the United States, responded to an urgent request from LCWR for economic help and for volunteers to give hands-on ministry to the immigrants at the border. Sister Maura volunteered from Dec. 6 until Jan. 1, in El Paso, Texas. Other Dubuque Presentation Sisters responded to these unmet needs in various locations.

Sister Maura McCarthy (right) helps distribute clothing at a center for migrants in El Paso, Texas, during her trip Dec. 6-Jan.1. Members of several women’s religious orders responded to a call for assistance at the border. (Contributed photo) 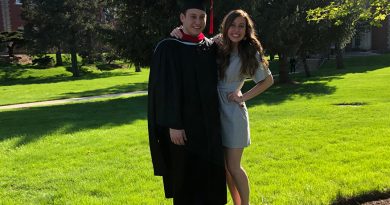