By Mark Schmidt
Special to The Witness

In our secular society these two concepts are often pitted against one another as if they are opposites. Our Catholic faith does not see these two topics as opposing forces but rather as complimentary values that help us live the call of Christ to serve the dignity of the human person and care for the common good.

We also struggle with the challenge of understanding the fullest definition of what it means to be “pro-life.” While many wish to make this exclusive to abortion and euthanasia, the Catholic faith, following the Gospel of Jesus Christ, recognizes that being pro-life is more than those select topics and that by promoting a more comprehensive vision of being pro-life we can be more successful against the Culture of Death especially with regards to abortion and euthanasia.

When Pope Saint John Paul II wrote his encyclical letter “The Gospel of Life (EV),” he presented such an understanding of what it means to be pro-life and how the Culture of Death clouds the dialogue by promoting direct attacks on the dignity of the human person and also by confusing humanity about what is good, what is evil and what we should do in response. He speaks of the Culture of Life and the need for justice to exist to bring it to fruition.

This is the Catholic understanding of this intimate relationship between social justice and being pro-life. We bring about a culture of life by seeking justice in every social and political area of society. Pope St. John Paul II quoted the document from the Second Vatican Council “Gaudium et Spes (GS)” when laying out various issues that fall under the umbrella of “pro-life” issues which are also issues of social justice:

“Whatever is opposed to life itself, such as any type of murder, genocide, abortion, euthanasia, or willful self-destruction, what­ever violates the integrity of the human person, such as mutilation, torments inflicted on body or mind, attempts to coerce the will itself; whatever insults human dignity, such as subhuman living conditions, arbitrary imprisonment, deportation, slavery, prostitution, the selling of women and children; as well as disgraceful working conditions, where people are treated as mere instruments of gain rather than as free and responsible persons; all these things and others like them are infamies indeed. They poison human society, and they do more harm to those who practice them than to those who suffer from the injury. Moreover, they are a supreme dishonor to the Creator.” (GS, 27)

Following this teaching the Office of Respect Life and Social Justice and the Faith Formation Division of the Archdiocese of Dubuque have developed a year-long program designed to address several topics throughout the liturgical year that promote the areas of respect life and social justice.

The program is called “Formation For All” and follows a three-year cycle to reflect the distinctions made by the council: Whatever is opposed to life itself, whatever violates the integrity of the human person and whatever insults human dignity. It is designed to help Catholics of all ages live the call of Christ by not only learning about the church’s teaching on various topics but also assisting in developing lives of action on those issues in order to:

“Continue to overcome apathy, offering a Christian response to the social and political anxieties, which are arising in various parts of the world. I ask you to be builders of the world, to work for a better world. Dear young people, please, don’t be observers of life, but get involved. Jesus did not remain an observer, but he immersed himself. Don’t be observers, but im­merse yourself in the reality of life, as Jesus did.” (Pope Francis – 7/27/13, Vigil)

The program will also follow the liturgical year, beginning in Advent and culminating in October, Respect Life and Social Justice month. All lessons for the entire first year can be accessed on the Office of Respect Life and Social Justice website. The first topic focus will be building peace and understanding Just War Theory during Advent, a season of preparation for the Prince of Peace, Jesus Christ. We will share more about that topic next week.

For more information, including videos that explain this program go to dbqarch.org/rlsj/formation.

Or contact the director of Respect Life and Social Justice, Mark Schmidt, at dbqrlsj@dbqarch.org. 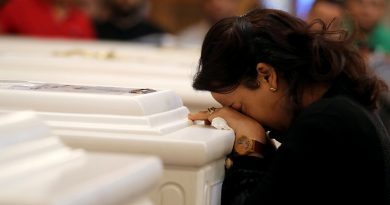 Guidance on coping with grief and loss in the 21st century 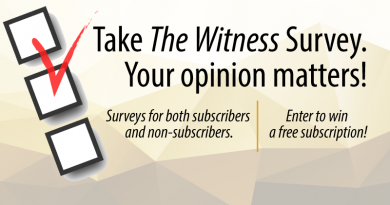 Reflecting on Catholics and immigration