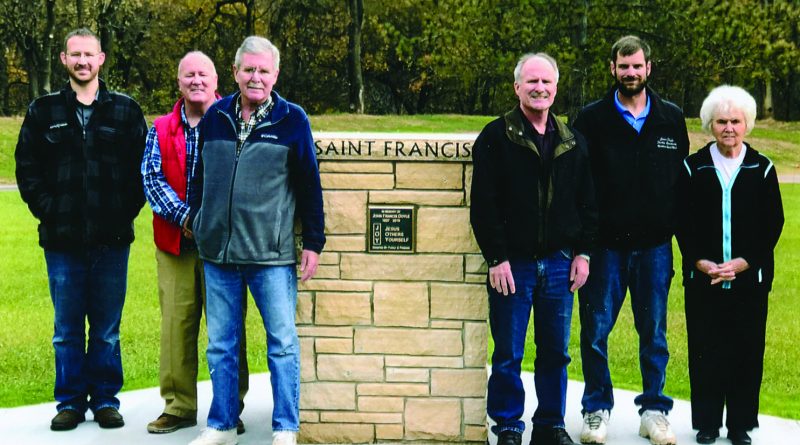 St. Francis statue will stand on a base made by family

CEDAR RAPIDS — As a stonemason, bricklayer and homebuilder, John Francis Doyle spent a lifetime making things that last, but now that the 81-year-old has died, it is his commitment to joy that will impact the world the longest. For Doyle, joy was more than just a feeling, it was a way of life.

“We are Christmas people,” explained his wife, Jan. “We loved the word joy. (John) came home one day and said, ‘Jan, I heard on the radio today that J.O.Y. means Jesus first, others second and yourself last.’ So we tried to live like that. We decided this would be his mantra. It’s on his tombstone. It’s all over. That’s our message to people — live a life of J.O.Y.”

In order to spread this faith-filled motto, the Doyle family is engaged in creating a unique monument at Mt. Calvary Cemetery in Cedar Rapids about 15 feet away from John’s grave. Relatives and friends, led by one of John’s sons Shawn, who is also a mason, built a large stone base with their own hands.

A plaque on it explains the concept of J.O.Y. On top of the platform will eventually be a six-foot-tall custom made statue of St. Francis of Assisi, which is currently being made by a private company.

When the statue arrives, the family is planning to hold a blessing ceremony that will include members of Immaculate Conception Parish, where the Doyles are members, and St. Patrick Parish, where they have also been active. The statue will stand in the section of the cemetery which is named after the Italian saint. The same skills John Doyle taught Shawn and that Shawn has taught his own son Jason were used in the creation of the monument’s base. This was very important to the family.

John Francis Doyle was born in 1937 at Mercy Hospital. He graduated from Immaculate Conception High School. By age 18, his father was dead from cancer. When he was 21, his mother died, leaving him to care for his three siblings, who were still minors. By then, he had already met his future wife, Jan, who had come to Iowa from Nebraska to work for a telephone company.

“(John’s) father was dead when I met him,” recalls Jan Doyle. “I only met his mother two times. At that time, John was living at home, living the life of a school kid and partying all the time. His mother wanted him to settle down. She died, and then we got married.”

The early years after the Doyle’s marriage in 1960 were not easy. While raising John’s siblings, the Doyles also welcomed children of their own. John was working in construction while she cared for the children.

“We were living in his parents’ home,” said Jan. “We had two sons, and we had three bedrooms, so we needed a (bigger) place to live. Someone hit our car and paid us to get it fixed. We got $500, and we went and bought a lot. We built a house on that lot. He didn’t know carpentry, but he knew masonry. There was no wood in the house.”

That started the couple’s partnership as homebuilders. Multiple times over the years, they would build homes to live in and then sell them after several years. A big break came in 1976. They were able to sell the home they were living in and buy 40 acres for $40,000. They began building homes for people on that land. John took care of the masonry and hired subcontractors for other parts of home construction.

“We never advertised. People would knock on the door and say, ‘Is this your land?’” said Jan. “‘We’d like to buy a lot.’”

In the 1970s, as their financial situation improved, the Doyles deepened their spiritual lives. Although they had always been Catholic, they did not have much of a personal prayer life outside of formal occasions. This shifted drastically after both attended events at St. Jude Church.

“We would have been what you’d call Sunday Catholics,” said Jan. “I went to a Life in the Spirit seminar, and it changed my life, and a year later John went, and it changed his life, and he became a leader in  the prayer group.”

Growing up, the three Doyle boys would sometimes go out with their father, getting the chance to play while he worked as a small independent contractor. When they got a little older, Shawn, in particular, took an interest in stone and brick masonry.

“I laid my first brick when I was 14 on a brick barn at my dad’s house,” he recalled. John Doyle taught Shawn his trade as well as passing on the values of hard work and generosity to all his children.

“The thing I remember about my dad, it wasn’t about the money,” said Shawn. “My dad would teach you to do things well. Money meant nothing to my dad. If my dad had a billion dollars or was in bankruptcy, you’d never know the difference.”

Doyle and his wife enjoyed using their talents for the church as well. John completed many improvement projects at his parish and St. Patrick’s. After John’s death on March 30, 2019 of cancer, people in the community donated to the monument project. Stone City, a local quarry, gave the family all the stone for the base for free and other contractors in the area also contributed.

The Doyles got the idea for the statue while visiting Mt. Calvary.

“My sons and I were at the cemetery trying to pick out a plot to bury him, and we came upon a section, and it was called St. Francis,” recalled Jan.

“We bought a plot there and thought we could put up a statue of St. Francis,” she said.

The Doyles hope that when folks see the monument, they are inspired by the idea of J.O.Y. expressed on the plaque.

“(John) loved people, and he loved doing for others,” said Jan Doyle. “John and I, we built houses together. We were working people. We did these things, and it was God’s plan.”

Cover photo: (Left to right): Brandon Caldwell, Dan Doyle, Terry Doyle, Shawn Doyle, and Shawn’s son Jason Doyle, along with Jan Doyle, pose by the stone base that will hold the statue of St. Francis. The Doyle family and friend Caldwell built the structure themselves at Mt. Calvary Cemetery in Cedar Rapids with donated materials. The custom statue is due to be delivered soon. (Contributed photo)

The sixth spiritual work of mercy: ‘comfort the afflicted’

Collaboration and consensus in a church on the move