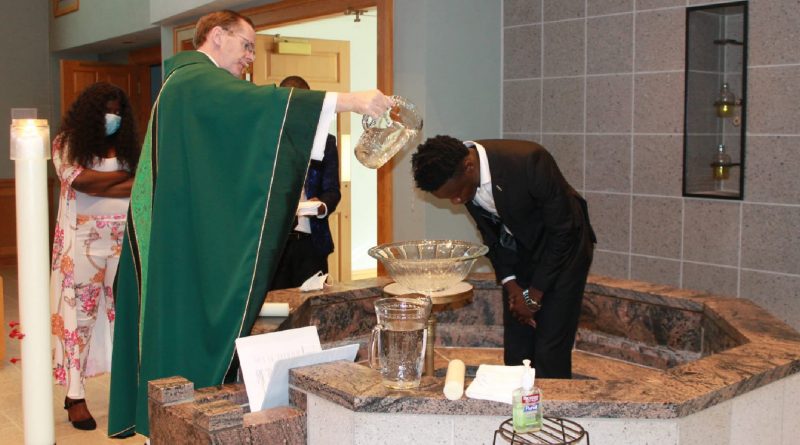 Among those to enter church after COVID-19 delay

On June 27, the recent immigrant from Benin, a West African nation, received the sacraments of baptism, first Eucha­rist and confirmation at St. Edward Parish in Waterloo. He was one of about 150 catechumens and candidates in the Archdiocese of Dubuque who experienced a delay in joining the church this year due to the coronavirus pandemic, but have been welcomed in recent weeks. The excitement was still evident in his voice as Gueguezo spoke about his conversion and the Mass where he finally completed a long process.

As a child, Gueguezo was not baptized and was not a regular participant in any religion. After getting married and then immigrating to the United States in 2017, his interest in Catholicism increased. After winning a visa lottery, the young man found himself in a new country by himself pursuing his dreams. Gueguezo speaks French, his native language of Fon, and others, but was new to English. He decided that after learning English, he would join the church. He eventually entered the Rite of Christian Initiation for Adults (RCIA) at St. Edward Parish, a program that usually takes about seven to nine months.

“From what I understand, (Gueguezo) was inspired by the example of others, particularly other immigrants,” said Father Scott Bullock, pastor of St. Edward Parish.

Gueguezo studied at Hawkeye Community College and hopes to become an electrician. In recent years, he received support from his godparents, who are immigrants from the Congo that also belong to the parish, and Ellen Kuchera, RCIA coordinator for the Catholic Parishes of Waterloo.

“COVID-19 definitely threw a loop into the RCIA process as we had it planned,” reflected Kuchera. “Yet I can’t imagine a more authentic and first-hand experience of Purification and Enlightenment, a period that normally is aligned with just the season of Lent but for our candidates this year stretched far beyond Easter. This extended period of time fed a hunger and desire for the sacraments in Mahunan’s heart that was palpable.  When we were finally able to celebrate sacraments, the beautiful simplicity of the liturgy touched the hearts of all and was no less grand than the normal Easter Vigil experience.”

Gueguezo entered the church at a Mass with one other catechumen, Amy Thole. The pair had to delay their sacraments when public Masses were suspended due to the pandemic. The liturgy in June was a special one, which included Gueguezo’s godparents and a small group of parishioners. There was disappointment in the delay, but in the end, God’s grace abided, according to Father Bullock.

“There was a beauty and a clarity to it,” said the priest of the liturgy.

Since Masses have resumed, St. Edward Parish has taken recommended safety precautions, such as social distancing.

“Every third pew is available for use,” said Father Bullock. “We have about 25 to 30 percent of the congregation full at this point.”

What occurred with St. Edward’s catechumens is similar to what’s happening for those entering the church around the archdiocese.

“Some parishes are bringing candidates into full communion as an entire community together at the same liturgy,” reported Father Greg Bahl, director of the office of worship for the archdiocese. “Some parishes with larger RCIA communities are bringing them in one family at a time or during livestreamed Masses.  Some just on Sundays, some spread out on weekdays.”

In normal situations, it isn’t necessary for a baptized, non-Catholic to be confirmed on the Easter Vigil, according to Bahl.

“People can become Catholic throughout the year, even in normal circumstances,” he said. “It is the non-baptized that typically follow the very ancient practice of being baptized and confirmed on the Easter Vigil.”

Gueguezo is happy he was able to join the church when and how he did. He continues to attend Mass, read Scripture and participate in parish programs to deepen his faith. Being without his family has been challenging, but he is grateful for the opportunities he has in the United States. He hopes to become a successful electrician and an American citizen in the coming years.

“I want to bring my wife and daughter here,” he said.

Cover photo: Father Scott Bullock, of St. Edward Church in Waterloo, baptizes Mahunan Gueguezo during a Mass June 27. The immigrant from Benin became interested in Catholicism in Africa and converted while in the United States. (Contributed photos)

Week 37: Communion Rite: how to receive the Eucharist