MASON CITY — Laura Bernemann, the director of the youth choir at Epiphany Parish in Mason City, is quick to express her admiration for the young people who participate in the parish’s youth-led music ministry.

“I never cease to be amazed at the talent and the generosity of our young musicians,” reflected Bernemann.

This year marks the 10th anniversary of the formation of Epiphany’s youth choir, which currently consists of 21 middle school- and high school-aged youth.

“Some people wonder at how we keep people involved year after year,” Bernemann said. “Clearly, it is the work of the Holy Spirit.”

Bernemann also credits the consistency of liturgy and practice schedules with helping the choir to thrive. The youth sing on the third Sunday of each month, alternating between Epiphany’s two churches, St. Joseph’s and Holy Family. They practice before Mass and also on the second Sunday evening of every month.

The youth choir has been well received at Epiphany Parish, Bernemann said, and the young musicians of the choir often receive applause at the end of Mass and are complimented and thanked by parishioners for their ministry.

“I have, however, been reminded by one parishioner — who now enjoys us — that our very first attempts were not fabulous,” Bernemann remembered.

Over the years, as the youth choir has perfected its sound, members have also made an effort to offer different types of worship music at Mass — at times introducing new songs to the parish to keep things fresh, at other times playing more traditional, tried-and-true favorites. The choir has also been known to sing modern remakes of older hymns.

“I recall that when we sang a contemporary version of ‘Holy God, We Praise Thy Name’ it was well received by our older members,” Bernemann said.

The choir has also integrated more than a dozen different types of instruments into its music ministry, from drums and guitars, to violins and cellos.

Each of the three senior members of the youth choir who graduated this spring played instruments in addition to their vocal contributions to the choir — Grace Pistek played the clarinet, Carolyn Bernemann the flute, and Bradley Lorence a brass instrument called the euphonium.

These three members, the youth choir director said, highlight not only the large variety of talent of the choir members, but also their commitment to the parish’s music ministry. By May of 2017, Pistek, Bernemann and Lorence had sung and played collectively at a total of 233 Masses, and also put in at least that many hours of practice time.

As much as they’ve given, these three young people believe their participation in the youth choir has also given them much in return.

Carolyn Bernemann, who joined the youth choir when she was in the sixth grade, said being a member has nurtured her faith throughout the years of her participation.

“Being in the youth choir has allowed my faith to grow right along with my passion for music,” she said. “When I’m directly involved in Masses, I feel a greater connection to the messages.”

Pistek said she has had a similar experience as related to her faith.

“A large part of why I love participating in youth choir is having such a universal way to express my faith,” she reflected. “I get to use music to strengthen my relationship with God.”

For those members who are now pursuing an education in music, youth choir has also given them an invaluable experience for their future.

“I am pursuing a career in music therapy and music education, and I will draw from my love for all that I have learned with this group for the rest of my life,” said Pistek, who begins her first year at Wartburg College this fall.

Likewise, Lorence said his faith has led him on a path that brought him to youth choir and now on to majoring in music education at the University of Northern Iowa. He hopes to someday be a high school band teacher.

Epiphany’s youth choir has also provided its members the chance to meet new people and make new friends while together serving their parish community.

“The most rewarding part of the youth choir has been the friendships that I’ve formed,” said Carolyn Bernemann, now beginning her freshman year at Iowa State University. “There’s nothing better than being with wonderful people while doing something you love that benefits those around you.”

Lorence said he takes with him memories from his time in the youth choir, and he encourages other young people to get involved in music ministry in their parishes and make memories of their own.

“I would just like to tell kids that youth choir at church is a good time, and I would highly recommend it to anyone who can,” he said.

Both Lorence and Pistek said they may help out with the youth choir in the future, and Bernemann said she plans to do so whenever she is home on the weekends or on break. But even as these three transition out of the parish’s youth choir and on to college, the tradition of youth-led music ministry at Epiphany Parish continues.

Laura Bernemann said she has been told that the young people in the choir she directs are the “future of the church.”

“Looking at our young people,” she said, “I’d say our future looks bright!”

From left to right in front: Grace Pistek, Katie Lorence, Bradley Lorence and Carolyn Bernemann lead singing with the youth choir from the front of Holy Family Church in Mason City in July. (Contributed photo) 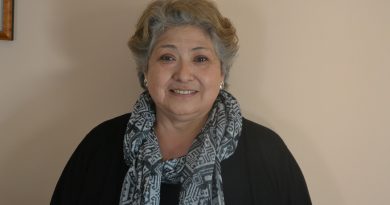 Sharing the journey: immigrant tells story of coming from Bolivia to DBQ 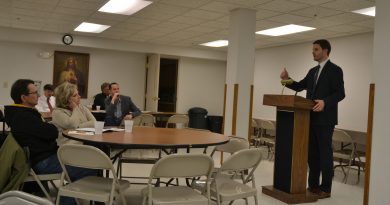 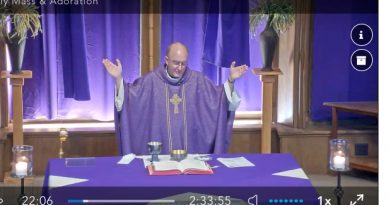