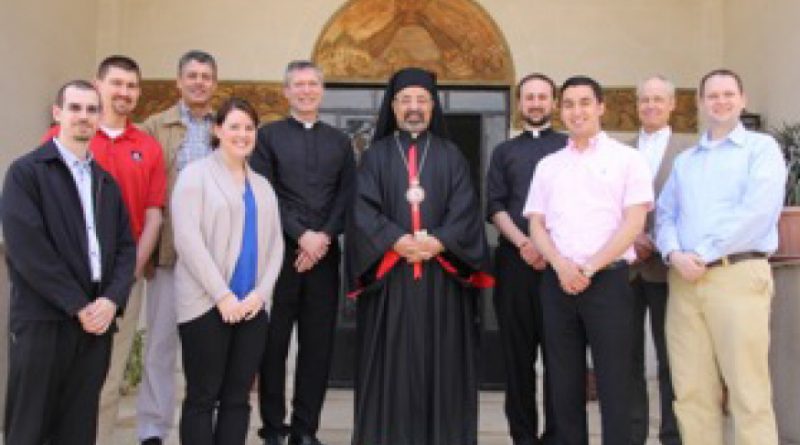 By Dennis Conway
Special to The Witness

ROME — This Easter I was blessed with the opportunity to join Catholic Relief Services (CRS) for a trip to Egypt to see the work they do there. CRS is run by the United States bishops to carry out aid and humanitarian work according to our Catholic faith in parts of the world outside the United States. Many of us may be familiar with CRS from the Rice Bowl Project some of our parishes participate in during Lent, but it is not often that we get to see the fruits of that support first hand. It is impossible to describe all of the good work that CRS does on behalf of the Catholic Church in the United States that I witnessed in Egypt, but a few stories might be a good start to share their good work with you.

There has been a lot of talk in the news about the refugee crisis in Syria, and it has had a huge impact on Egypt. In fact, in Egypt the law gives special support to Syrian refugees. However, many people don’t know that there are other smaller refugee groups from countries like South Sudan that do not enjoy the same protection under the law. The children of these other refugee groups are not allowed to attend public schools and many of the parents cannot afford the private school. CRS supports over 20 refugee community schools. We visited one of them which is a Catholic school that uses the South Sudanese curriculum and works with the embassy so that they can graduate with a degree from their home country. We visited the school on their graduation day, and it was incredible the joy they displayed at things that we might take for granted. For a first grade graduation parents were running down, shouting in joy, and carrying their children up to get the degree. They were so proud, so happy that their children had the opportunity to go to school. Without the textbooks that CRS prints for them, they would not be able to get even a first grade education.

Many youth refugees have arrived in Egypt having lost or been separated from their parents somewhere along the journey. A lot of them end up living on the streets of Cairo, possibly not speaking the language, and certainly having already seen many hardships. Just getting food for the day can be difficult. CRS provides a program for these youth to train them in problem solving and coping skills during this difficult time while they try to find housing and work, or to be resettled with a foster family. In addition to the training, the young people are given free meals when they attend the training.

While the Syrian refugees have some legal protections they are certainly not without hardships. Other Syrian refugees have arrived with their families but have bleak hopes of a future. It can be difficult to find work for many of them so CRS provides entrepreneurial classes to train them in opening small businesses such as sewing, cleaning, or small shops so they can earn enough to feed their families. They also work to help them with hope for a future by providing scholarships so that some of the children can go to college. One of the beautiful aspects of CRS is that they focus on the entirety of the person. It is good to give someone enough food to eat, but it is also important to listen to their story, to help them to provide for themselves to maintain their dignity, and to allow them to be integrated members of a community. In providing these scholarships, CRS is really giving these children a hope for the future. They have the gifts and talents to do well in school, but they have been uprooted from their home and everything they knew. Now, because of CRS’s work, they are learning to become doctors, lawyers, and teachers.

We met one of the young women that CRS helped with a college scholarship. Her name was Sajeda. At first, I could not tell she was a woman. She had cut her hair short like a man’s and dressed in men’s clothing. We asked the CRS staff about this after speaking to her and they told us it was a way for her to try and avoid sexual harassment at school. She was studying law at the local university so she could work in diplomacy, to promote peace, thanks to the CRS scholarship. We asked her what she would have done if she had not had the scholarship and she said, “I would find a way.” I was extremely impressed. This young woman had been displaced from her home, faced harassment at university, was forced to flee to another country, but she was determined that she would get an education and to build a better future, a future of peace for all, in spite of everything she had been through.

CRS also works in peace building efforts within Egyptian communities as well as working with refugees. Historically, the Muslim and Christian populations in Egypt have coexisted fairly well. However, they are somewhat separate social communities and misunderstandings or small incidences lately have led to violence. CRS is working within these communities, with both Christian and Muslim community members, to help them learn to talk and resolve a situation peacefully before it becomes a bigger and more violent issue, and they have had great success.

This is just a small sample of what I saw in Egypt from CRS but I was thoroughly impressed. Meeting these people helped me to see what our brothers and sisters around the world are facing, and what good work the Catholic Church is doing throughout the world through organizations like CRS. I would ask that you continue to keep the people in Egypt and CRS staff in your prayers and support. They are good, kind, and wonderful people who face difficult situations every day with a smile. They are our brothers and sisters, and I will never forget them.

Conway is a seminarian for the Archdiocese of Dubuque studying at the Pontifical North American College in Rome.

The CRS Global Fellows Group that traveled to Egypt recently is pictured with the Coptic Catholic Patriarch. Seminarian Dennis Conway is the first person on the far left of the photograph. (Contributed photo) 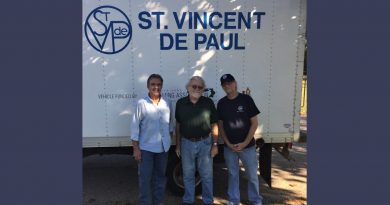 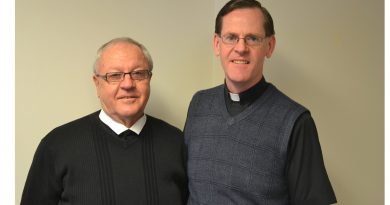